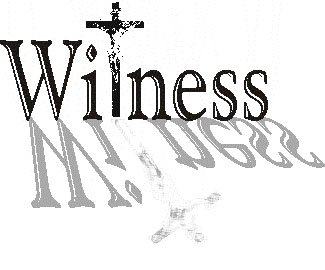 Last week we heard the story of Stephen, the first to die because of his insistence that he would both live and speak his faith in Jesus Christ, whatever the consequences.

Today our story moves to another witness to Jesus – Paul, the great evangelist of the first century, the one who, more than any other, took the good news across the ancient world.

In today’s reading, Paul stands in Athens, the heart of the Greek world, and a great centre of learning still in the Roman era. And before the philosophers and teachers and debaters of the city, he once again witnessed to Jesus.

So our theme, our subtitle, today – “So how should we live: be witnesses”.

And I’m guessing that for most of us the idea that, knowing all that God has done for us in the life and death and resurrection of Jesus, we ought to be witnesses. We ought to be both showing and telling those around us about God, about Jesus, about the Kingdom, about all that it means to us. And yet somehow, it seems really hard to do. We feel awkward, hesitant. We don’t want to offend, we don’t want to impose, we don’t want to be insensitive. We certainly don’t want to come across as thinking we have all the answers, especially since we know that we all have our own share of questions, doubts, uncertainties.

And yet, at the same time, there is something in the story of Jesus that we know matters; something that has made a difference to us in our spiritual journey.

So how do we live as witnesses to Jesus, in the midst of all of that turmoil within ourselves?

I’d like to suggest that there are three parts of how Paul acts as a witness to Jesus in Athens that we might really learn from, as we consider how we might live at witness to our vaguely religious friends, our friends of other faiths, followers of other philosophies, or the (nowadays very common) Spiritual But Not Religious.

The first takes place before Paul even starts to speak. he begins by saying “I went through the city and looked carefully”. Before Paul began to preach to the people of Athens, he first learned about them. He looked, he listened. He took a little bit of time to understand the culture, religious and social, of the people amongst whom he was walking. He took the time to find out what they thought, how they believed, what was important to them, how their lives were shaped.

He didn’t come in with a simple declaration of “here are all the answers”, a cookie cutter form of religion and worship that would fit all sizes. The first thing he did was to look carefully.

And then later in the story he quotes from their culture; their philosophers, their poets. He can only do that because he has taken the time understand.

I wonder how carefully we look and listen and learn about our culture and our context outside of the Christian bubble. Those who do not value our – or any – expression of faith; what do they value? What is important? What is their worldview, their philosophy? What are the cultural drivers, what are their expressions of spirituality – because even amongst people who identify with no faith, it is rare to find nothing that is at all spiritual (in the broadest sense).

Mike Frost, the Baptist Minister, says that when people find out (as they often do, in casual conversation) that he is a minister, the most common response is “oh, I’m not religious”. I suspect most of us have come across that as a reply when people learn that we go to Church. He answers with a question: “so you’ve never had any sort of spiritual experience?” – and almost without fail, they will then have a story to tell.
And crucially, what he then does is listen to what they have to say. It might be a story of ghosts, or of dreams, or of premonitions, or of a feeling of the grandeur of creation, or of unimaginable beauty, or simply an inexplicable sense of the numinous. Or it might be a sense of values, of what matters, of justice or family or environmentalism or community or progress or creativity in music or art.

But the thing to do is to listen without prejudice. Because the first part of witnessing to the good news of Jesus is to know where someone already is.

And that listening and understanding leads naturally into the second part of Paul’s approach; that he values and affirms the spirituality of those to whom he is speaking. “I see how religious you are in every way,” he declares, “you even have a place of worship for the unknown God”.

The popular impression today of the Church, of Christians: the main view of us outside the walls of the Church is defined by what we are against. Research about attitudes to the Church in the US was recently summed up as anti-youth, anti-women, anti-science, anti-gay, anti-muslim, anti-immigrant. We’re really good at telling people what we don’t approve of.

Paul doesn’t condemn the Athenians because they are worshipping idols (earlier, in the synagogue, he did just that, distressed that the Jews, who ought to have known better, were putting up with idolatry). In the Gentile setting, he sees this worship of many Gods not as idolatry to be condemned, but as an expression of spirituality to be recognised, affirmed, built upon.

Whatever expression of spirituality you find in another, I suspect you can take a positive lead out of it. A story of ghosts or premonitions points to a sense that there is more to life than this physical world. An experience of majesty or the numinous points to the wonder of creation. The desire for justice reflects the yearning of God for all God’s people to be treated right. I doubt there is anything that someone can tell you they value or feel or experience out of which you cannot find a thread that lies in common with the Christian story – for they too are made in the image of God, with the instinct for the divine, however hidden it might be; and beyond that. the Holy Spirit is at work in the world, in the people of the world, prompting and inspiring and provoking.

So listen without prejudice, valuing the things that point to an instinct of spirituality in others. But then, and this is the third part of Paul’s approach, and sometimes the one we are worst at, offer what we have to add.

What Paul did was to identify, in the philosophies and spirituality of those with whom he was in conversation, those threads of thought and understanding that pointed beyond where they were towards something else. For the Athenians it was firstly the shrine to the unknown God – a recognition that there was more to the divine than they yet knew, a power greater than that of the Gods they named. And then to that he added the observation of their poets that God was somehow beyond the idols and temples that they worshiped at: “in him we live and move and have our being… for we too are his offspring”.

Paul took the insights that the people had of God, and rather than seeking to tear them down, he built on them, as if to say “Your best and truest religious experience, your best and truest philosophy: they point you to something else. And I think I have the next piece, I think I know something of God that your truth is pointing you towards, and I’d like to tell you about it.”

“What you worship as unknown I will proclaim to you”. You hear it in those words? Paul tells a bunch of pagans that they are already worshipping the God he wants to tell them more about.

Not “stop worshipping those idols, and worship the one true God” but “your worship has lead you towards God, let me offer you another step along that path”.

So having listened for and then affirmed the spirituality of others, in whatever form it takes, the third step is to name the unknown God for them.

Your passion is for justice? The God of justice is the unknown God that has called you and empowered you.

You fight for the environment? The creator of this world is the unknown God you are working alongside.

Your love of science? The one who set the rules to bring order out of chaos is the unknown God whose thoughts you are thinking after.

The value you place on community, on family? The God whose nature is love is the unknown God who creates communities, places us in families.
Your creativity in art, music, invention? You are a co-creator with the unknown God who has never stopped making something new.

So how should we live? As witnesses to what Jesus Christ has done in and for and with is.

Listening to those around us; hearing and affirms the instinct for the spiritual, for ‘more than this’, for meaning or value or purpose.
Finding those common threads that reflect the image of God in the other, and the work of the Holy Spirit prompting them.

And then being brave to name the next step, to identify the unknown God to whom their life bears witness as the one who has been revealed to us in Jesus Christ.

And so be witnesses.