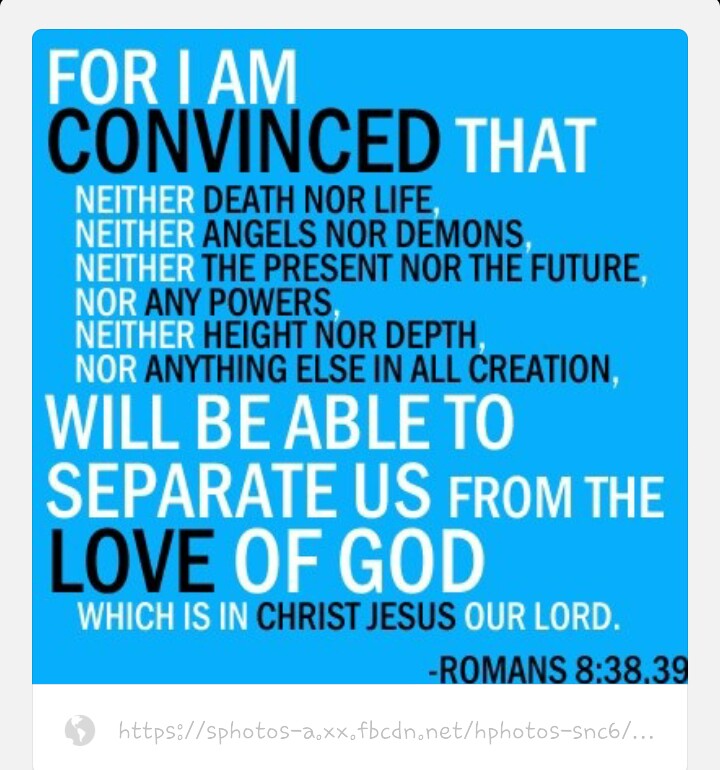 Nothing can separate us

Romans 8:26-39
And so today we come to the last of our series on the promises of God from these few chapters of the book of Romans.
I’ve never preached on Romans before, so it’s been great to have the chance to spend some time in this often dense and complicated text.

At the start of the series we decided to name it “The Promises of God”. The thinking was that having had a series on “how should we live”, in which we explored the demands that the faith places on our lives it was important to balance that out, recognising that living lives consistent with the kingdom of God, important though it is, is not right at the heart of our faith.

That our faith is a lot more about God than it is about us.

So “the promises of God” was the theme.

But as I’ve worked through these texts its seemed more and more to me that wasn’t quite the right title. Because each time I’ve tried to tease out for myself the promise that emerges from the letter, I’ve found it looping back to the same place.

In the end I don’t think it’s the promises of God so much as it is just the promise of God. One promise, working out in different ways.

You are no longer under law, but under grace.

This is, perhaps, the most uniquely Christian of all ideas – for though the concept of grace, of God giving to humanity what they do not deserve – is found Judaism, in Islam, in many faiths – this sense of an absolute transition from transaction to gift is not, to my knowledge, found anywhere else.

And in today’s reading we see that fundamental truth, that complete change in the nature of reality, worked out once more: because we are under grace, not law, because our lives are determined by the gift of God, not by transaction, there is nothing in the whole of creation, physical, spiritual, psychological or emotional, past, present or future, that can separate us from the love of God.
Why? Because our status, our reality, our place in the Kingdom of God doesn’t depend on us, but on God.

What are we to say, he begins, if God is for us, who can be against us? The one who stands in our corner is the creator of all things – there is no powerful external force that might tear us away from God.

But perhaps God might decide it’s too much, too hard, that we aren’t worth the effort. So Paul continues: He who did not withhold his own Son, but gave him up for all of us, will he not with him also give us everything else? Look at the evidence of God’s commitment to us – God gave the most precious thing for us, how can you imagine that God having done that, would find any other cost too great.

But of course Rome is the home the law, and the next objection harks back to law and justice – what if we stand accused before God, and are convicted; surely evidence of our wrongdoing can drive us out of God’s presence?

And were that enough, we have more: It is Christ Jesus, who died, yes, who was raised, who is at the right hand of God, who indeed intercedes for us. Intercedes here is the legal term – to speak on our behalf, to plead our case.

At each stage in the argument, Paul’s point is the same – our place in God’s love is secured not by our actions (for that is law, transaction) but by God’s (for that is grace, the gift).

So who will separate us from the love of God that is in Christ Jesus?

So as we draw to the end of this series, this final conclusion of the promise of God, that there is nothing that can possibly separate us from God, takes us back to the very first objection.

There’s a certain logic to the argument: if our destiny with God doesn’t depend on how we live, why bother to restrain ourselves? Or, perhaps more realistically, why bother to make the effort, to take the risks, to make a difference for good?

For the more we learn about psychology, especially developmental, the clearer it becomes that the truth is exactly the opposite.
Security – knowing you are unconditionally loved – does not drive damaging, destructive, selfish behaviour. Quite the opposite. It is insecurity, fear, uncertainty that bring out the worst in us.

Taking risks for the sake of others doesn’t grow out of the need to gain a reward; but out of the knowledge of your own safety.
We don’t operate best out of fear of the consequences of failure, or even out of desire for the rewards of success. It is out of the strength of knowing who we are, what we care about, and out the confidence of being certain that someone has got out back that we flourish.

We are those people.

That is the strength out we operate. The rock on which stand, that gives us the courage to change the world.