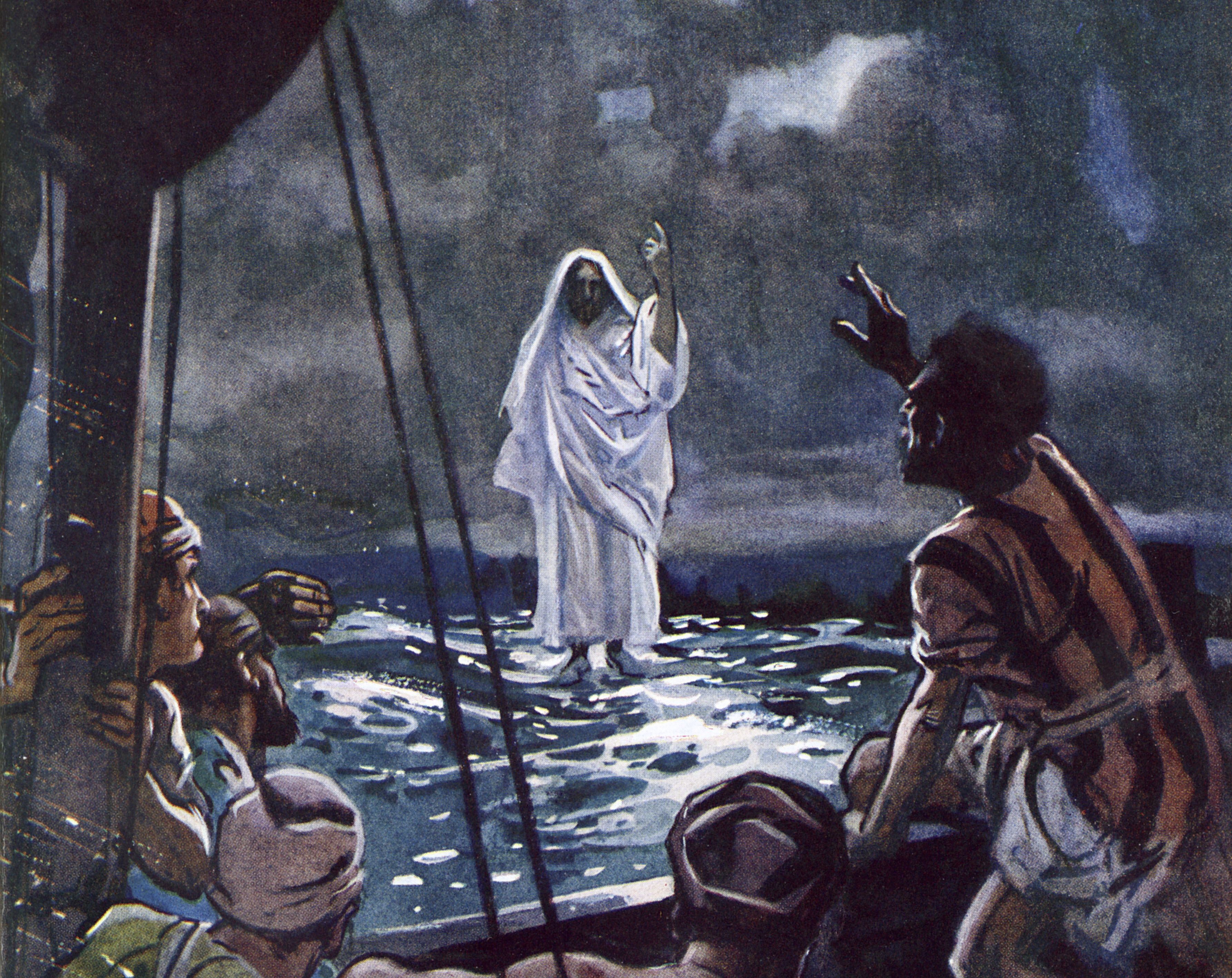 Matthew 14:22-33
And so, after the feeding of the five thousand, Jesus finally gets the time alone that he was looking for. He sends the disciples on ahead in the boat (and incidentally, I was left wondering about when and how the disciples arrived – they didn’t come with Jesus on the boat, so did they come with the crowds? Perhaps they were the ones who told the crowds where to find Jesus…) and then he dismisses the crowds.

And he went on up the mountain, to pray. His need for time alone with God had not been cancelled by his encounter with the crowd, by the abrupt way he was thrown back into the work of his calling, teaching and healing and feeding the crowds. He might have been able to put off his personal retreat, but he still needed to take that time out, that time to pray. Rescheduled by events, not replaced by them.
I guess this gives us a bit of a sense of the importance that Jesus gave to prayer. It may not have been as urgent as the needs to the crowd, but it was sufficiently important that once the immediate need had passed, he returned to plan ‘A’: pray.

And it seems he spends the night there, for it is only in the early morning that he reappears into the story.

The disciples, in the meantime, have had a rotten night; in the boar, far from land, battered by the waves, the wind against them. Presumably they haven’t slept; it’s been a long, wet, uncomfortable, unproductive night, fighting against the elements. Although it’s not a storm, as they face in another story, threatening to drown them, the fear is no doubt there, as they struggle to keep the boat moving, afloat, getting tireder, watching the weather which might any time turn worse.

And then they see him, walking on the lake. And they were terrified.

Well, you would be, right?

They thought it was a ghost – not, as I first assumed, when I read this passage, a word carrying the alternate meaning of spirit, or hallucination, but a ghost, a phantasm, the spirit of someone dead (the Greek word isn’t used anywhere else in the New Testament). Perhaps a sailor’s superstition; that those who are soon to drown are welcomed into the waves by those who have previously gone under.

I wonder if it occurred to Jesus, as he walked out across the lake, the effect that his appearance would have on those in the boat? In Mark’s telling of this same story, Jesus walks as if to go past them, to meet them at the other side of the lake; Matthew at least would tell us that Jesus was walking towards them! But did he realise how terrifying his appearance would be? At any rate, his first words – as so often seems to be the case in the Bible – were of reassurance: “don’t be afraid. Take heart! It is I”.

But all of this, Jesus walking on the water and all, is really just a prelude to the real story. The miracle here isn’t Jesus walking on water – well, I mean that is, but it’s the sort of thing that we kind of expect Jesus to be able to do, with the benefit of hindsight. But what happens next:

Peter walks on water too.

Now I’m guessing that the most common sermon theme from this point on is the way that Peter walks on the water for as long as he stays focussed on Jesus, but that when he starts to focus instead on the waves and the wind, his fear returns, and he begins to sink. The miracle happens when Peter stops thinking about the problems, the barriers, the dangers, and instead simply focuses on the one who has called him. And perhaps such a sermon might end by noting that when Peter realises what is happening, he cries out to Jesus – and Jesus rescues him.

And that’s clearly one of the messages in the text. I’ve certainly preached that sermon: perhaps even three years ago when this passage last came up in the lectionary.

But the problem with that way of telling the story is that it kind of puts the focus onto Peter’s failure to trust. Which is really a bit unfair, when you think that Peter is the one who got out of the boat.

In fact, I’ve noticed that we do this a lot with the disciples; perhaps because it’s reassuring to see them as having, like us, their faults and limitations. Thomas becomes doubting Thomas; Peter gets remembered for denying knowing Jesus. It’s good to know they weren’t perfect, but perhaps we sell them – and ourselves – short when we fail to give as much attention to the things they got right. And worse – much worse – I fear we do the same to other members of the Church, when we focus so much more on the things other people or groups or denominations get wrong (or that we believe they get wrong) than on the things they do which are good and right and just and true.

In any case, in this particular story, we definitely sell Peter short when we think about the reasons that he sank.

He got out of the boat. He, of all the disciples, was the one to walk on the waves with Jesus.

This is not the story of Peter reaching within, finding the resources he needed to step out of the box, to do more than he thought he could do. This isn’t about some sort of flourishing of human capability – it’s about him hearing that single word: “come”, and obeying, believing, that that word made it possible.

If Jesus called him to do it, he could do it.

And perhaps most of the disciples would be there; perhaps most of us would. If we heard Jesus call us – in whatever way we hear that call – we would have the courage to step out of our comfort, out into the unknown, to do and be more than we ever believed we would. Hearing Jesus and obeying isn’t what makes Peter unique in this story – important though listening and responding is.

What Peter did, and none of the others did, was to ask Jesus to call him.

If it is you, command me to come to you on the water

Hear the strange mixture of faith and doubt in those words? “If it is you”. This isn’t some rock-like solidity of faith (if you’ll excuse the pun which only works in Greek); he thinks in might be Jesus, but he isn’t sure.

And yet with that partial, conditional faith, Peter asks to be called: with, as we see in the way the story pans out, the willingness to at least begin the process of obeying, if the call cones.

And I wonder if, for many of us, much of the time, just as for the other disciples in the boat, this is the step in the life of discipleship we miss? Willing to respond, to step out in faith, even onto the waves, when we hear the call, see the need – we are good at looking after those within and beyond our walls who need help (not perfect, of course, but no community is).

But I wonder how good we are at seeking that call? Whether we could honestly pray: