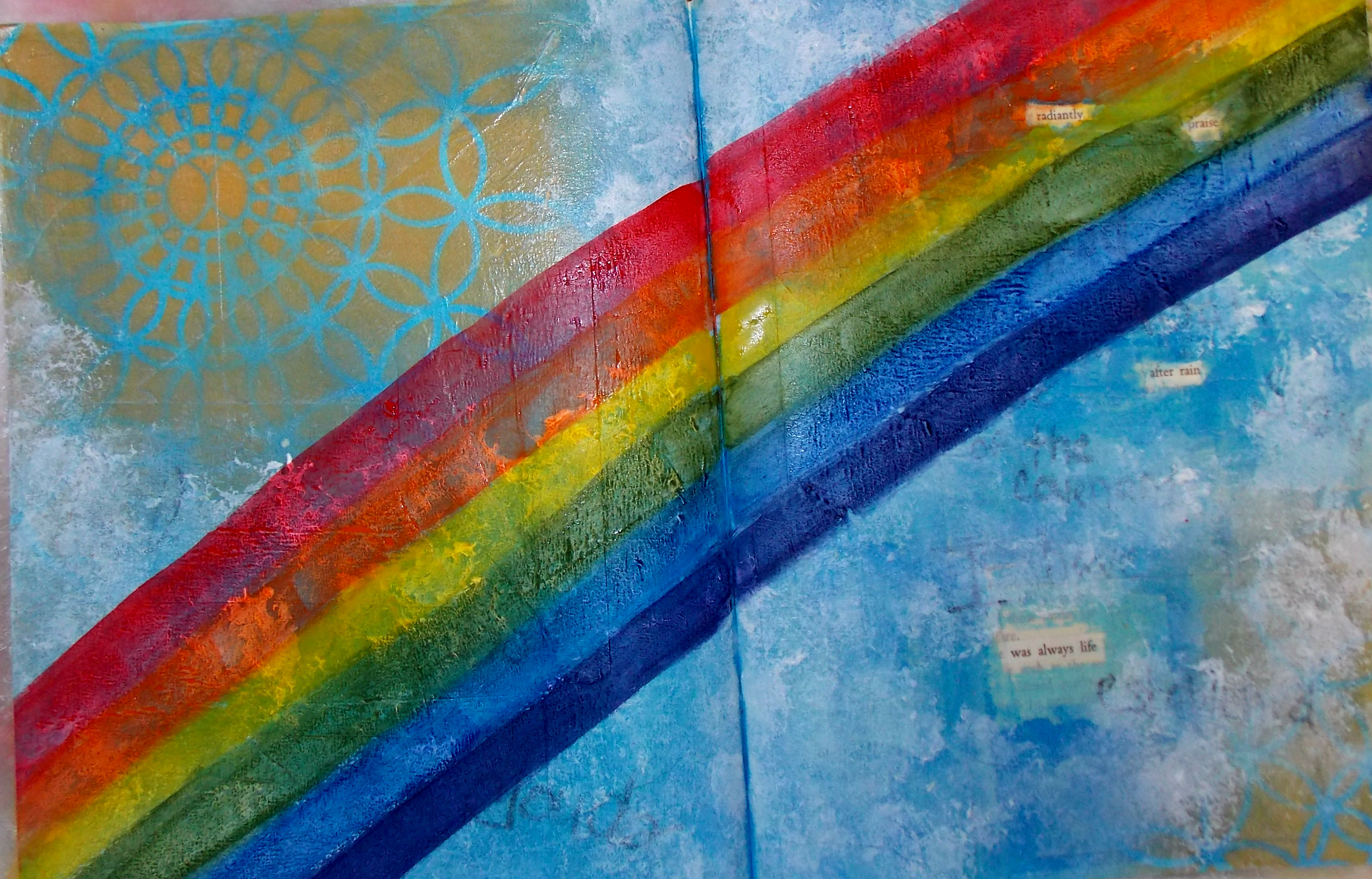 Genesis 9:8-17
One thing that I guess I’d already realised, but that has become more and more starkly evident as we’ve been planning this series on Justice, the public face of love, the outworking in the wider community, local, national and international of the call of Christ to ‘love our neighbour as ourselves’, is that though we try to separate out the different aspects of justice into neat categories in order to focus on them one at a time, the truth is that the deeper you look, the more intertwined they are.

We began with the injustice of modern slavery, but could not avoid the economic injustices that provide both the profit motive and the desperate poverty that lie behind much of that evil; nor, for that matter, the gender injustice that underlies the trading of women and girls for sex.

Today, as we turn to environmental justice, we cannot escape the observation that this too is inseparable from other aspects of justice; for it is the poor who bear the brunt of the harm that we do to the climate; the hundreds of millions of subsistence farmers who are most dependant upon the regular, reliable patterns of weather; whose land is most rapidly impacted by drought or rising sea levels, whose seas are most degraded by salination, temperature change, pollution, or overfishing; whose food and water supplies are most damaged by poor environmental regulation.

I wanted to start by emphasising this because for too many decades the popular image of environmentalism has been that of a conflict between the rational, pragmatic realists, building an economy, providing for all of our wants and needs, and green idealists, middle class hippies, and men with too much facial hair, concerned about protecting mother earth but with no thought for jobs, or economics; people who are more concerned about an obscure species of beetle than the social benefits of development.

For many people this changed in mid 2015, when Pope Francis issued “Laudato Si”, his encyclical on our responsibility for the environment. It’s really very good; I’d encourage anyone to read it, but what stands out throughout is that for this Pope, who has lived amongst and ministered to the poor throughout his life, concern for the environment arises out of concern for the poor, for those whose lives are most desperately effected by the harm that we do to earth that God has given to sustain us all.

For the truth is that we, in the middle class west, are mostly shielded from the harm that humanity have done. For us, a two degree increase in global temperature is a significant inconvenience; but for the two thirds world it is the loss of arable land, fresh water, homes, lives. Sureka and I talk about wanting to take the kids to see the Great Barrier Reef before it is bleached out of existence by rising temperatures and salinity; the people of Tuvalu have to face high tides during which waves from one side of the island meet the waves from the other; the people of Bangladesh have to deal with patterns of flooding and drought that threaten to displace 30 million people – ten times the number fleeing Syria today.

The concern for the poor and the effect of our climate on those living at the margins has even united the oldest of divides in the Christian Church. This year, for the world day of prayer for creation, the Pope and the head of the Orthodox Church, Patriarch Bartholomew, issued a joint statement that puts things far better than I could, and which I’d like to read some extracts from:

The story of creation presents us with a panoramic view of the world. Scripture reveals that, “in the beginning”, God intended humanity to cooperate in the preservation and protection of the natural environment. … The earth was entrusted to us as a sublime gift and legacy, for which all of us share responsibility until, “in the end”, all things in heaven and on earth will be restored in Christ. Our human dignity and welfare are deeply connected to our care for the whole of creation.

However, “in the meantime”, the history of the world presents a very different context. It reveals a morally decaying scenario where our attitude and behaviour towards creation obscures our calling as God’s co­operators. Our propensity to interrupt the world’s delicate and balanced ecosystems, our insatiable desire to manipulate and control the planet’s limited resources, and our greed for limitless profit in markets – all these have alienated us from the original purpose of creation. We no longer respect nature as a shared gift; instead, we regard it as a private possession. We no longer associate with nature in order to sustain it; instead, we lord over it to support our own constructs.

The consequences of this alternative worldview are tragic and lasting. The human environment and the natural environment are deteriorating together, and this deterioration of the planet weighs upon the most vulnerable of its people. The impact of climate change affects, first and foremost, those who live in poverty in every corner of the globe. ….

Therefore, united by the same concern for God’s creation and acknowledging the earth as a shared good, we fervently invite all people of goodwill to dedicate a time of prayer for the environment … On this occasion, we wish to offer thanks to the loving Creator for the noble gift of creation and to pledge commitment to its care and preservation for the sake of future generations

… We are convinced that there can be no sincere and enduring resolution to the challenge of the ecological crisis and climate change unless the response is concerted and collective, unless the responsibility is shared and accountable, unless we give priority to solidarity and service.

Our reading today from the book of Genesis told the end of the story of the flood, the covenant of the rainbow between God and Noah and the family of Noah, the ancestors (as the story is told) of all who live on the earth.

Now I’m not a Biblical literalist; the story of Noah and the ark is not one that I am tempted to take literally. Quite aside from the technical difficulties and lack of empirical evidence for the events described, the image painted of God in the narrative falls far, far short of the God revealed in the law, the prophets, and most of all, in Jesus Christ. And just in passing, who decided that this was a great story for children, a Sunday School classic? Sure, there are lots of animals in the story, and the rainbow makes for great artwork, but ‘God got fed up with how bad people were and so decided to kill them all’ – is that really a good starting point for our understanding of the love of God?

As is often the case in the Old Testament narrative, what we see is human emotion and human responses projected onto God – in this case the very human anger and despair and desire to rip it up and start again – and then a quiet voice which says “no”.

Over and again the Old Testament we see the people’s growing understanding of God, starting with something much more like the gods of their neighbours, fickle, regional, a projection of the best and worst of humanity, but step by step growing into the revelation of the one true God that we have in Jesus.

So in the story of the flood we read a narrative describing God acting as we might, lashing out in anger and sorrow; but then the story takes a twist, saying “no, that’s not what God is like”. Or even “That didn’t work”. For as you read on in the story of Genesis, Noah’s children rapidly return to the ways of those who had gone before; starting again with the one good person God could find was not a winning strategy.

(Interestingly God will offer it again to Moses on Mount Sinai, when the people worship the golden calf – to wipe them out and start again from Moses. And Moses has to talk God down. But that’s another story.)

And so God promises never again to destroy the earth with a flood. And places a rainbow in the sky as a sign of the promise.

The tragedy of climate change in our world today is that while God may have promised not to destroy, God did not promise to prevent us from doing so. And for many of our pacific neighbours in particular, the reality of life now is the flood not the rainbow. Not because God has forgotten the rainbow, but because we have chosen convenience and personal abundance over stewardship and mutuality.

Our care for creation is one part, one essential part, of our care for our brothers and sisters throughout the world. And around the world Christians and Christian organisations have been, in many cases, at the forefront of taking action. The global campaign to disinvest funds from fossil fuel production industries has been supported by many Churches – the Synod of NSW joining three years ago, and just this last week another forty major Christian groups signed on. And we can take pride in that.

But what about us? What about us as a community in Roseville Uniting Church, and us as individuals?

As a Church, because our premises are used most of the time, we consume a considerable amount of electricity (mostly for heating), and we’ve begun the process of trying to deal with that. Mark Northern (thanks, Mark) has been getting analysis on more efficient heating, and exploring the technical and financial practicality of a sizable solar system on the roof of the millennium hall. I hope we’ll soon be able to bring a proposal that will massively reduce our power usage (perhaps even make us net contributors to the grid) – with the added benefit of reducing our sizable electricity bills.

So I’d like to conclude with four suggestions of what we might do as individuals and families to play our part.

The first – well, I’ve mentioned the disinvestment campaign. If you have savings, or superannuation, ask the question: is your money being used to dig up and burn coal, or to fund alternative energy projects? It’s not hard to move your money, and it makes a difference.

Secondly, look at your energy use. How do you heat, or cool your home? Could you reduce your power consumption? Do you have a roof suitable for solar (systems today pay for themselves in a handful of years)?

Thirdly, ask the question: do we consume more than our fair share? We are immensely privileged in the west, in Australia, on the North Shore; challenge that privilege, that assumption that it is ok to consume because we can afford it. The world can’t afford a global population who consume the way we do.

And one form of consumption I’ll single out for my fourth suggestion: eat more like most of the world eat. Production of beef and lamb in particular produce over five times the carbon dioxide per calorie of a vegetarian diet; simply switching a few meals a week to chicken, fish or pork (yay bacon!) would make a big difference.

I’ll give the final word to the Pope:

What kind of world do we want to leave to those who come after us, to children who are now growing up?

Disregard for the duty to cultivate and maintain a proper relationship with my neighbour, for whose care and custody I am responsible, ruins my relationship with my own self, with others, with God and with the earth. When all these relationships are neglected, when justice no longer dwells in the land, the Bible tells us that life itself is endangered.

So let us love our neighbour in our care for the earth.