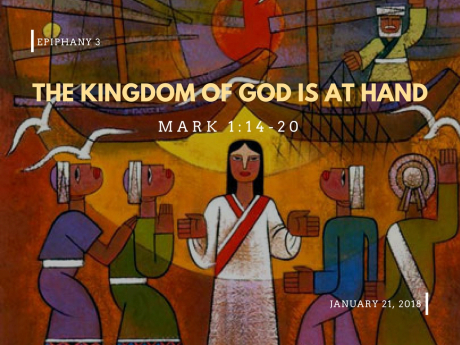 The kingdom at hand

Mark 1:14-20
Last week we thought about the calling of Phillip and of Nathanael, of Jesus’ simple call to Phillip – “follow me”, and of Phillip’s invitation to Nathanael, “come and see for yourself”. And the way that something happened in their encounter with Jesus which inspired them to join it, to follow, to be involved in the work that Jesus was doing, part of the movement that he was beginning.

But what was it that they were voting with their feet – with their lives – to be part of? What was the movement that Jesus was calling them into?
And so today we go back right to the very start of Jesus’ public ministry. Mark’s gospel doesn’t waste any time getting into Jesus’ ministry years. It has no birth narrative, no Christmas story, no Jesus as a child; it just jumps straight in with John the Baptist, Jesus’ baptism and temptation, and then, in verse 14

“Jesus came to Galilee, proclaiming the Good News of God.”

I wonder, if you were asked to put into one sentence the ‘good news’, the ‘gospel’ of Jesus Christ, what you would say? Perhaps ‘your sins are forgiven’. Perhaps ‘God loves you’. Perhaps ‘whoever calls on the name of the Lord will be saved’ or ‘whoever believes in him shall have eternal life’. Perhaps ‘they may have life in all its fullness’. Perhaps simply ‘there is another way’.

All of these are truths of the gospel, all are parts of the Good News of Jesus. But Jesus’ opening words in Mark’s Gospel, the words he uses to name the good news are these: “The time is fulfilled, and the kingdom of God is at hand; repent, and believe in the good news”.

“The time is fulfilled, and the kingdom of God is at hand”.

At the start of Jesus’ ministry, before he has done any teaching, before he has healed a single blind man, cast out his first demon or cleansed any lepers, long before his death and resurrection, his ascension and sending of the Holy Spirit – before any of these things – the kingdom of God was already near – indeed, at hand, close enough to reach out and touch.

This was the good news that Jesus preached everywhere he went; that the kingdom was at hand, here and now. Not sometime in the future, or in heaven. Not exclusively in some especially religious group such as the priests or fundamentalists, nor in a political movement like the zealots, nor in the hearts of some faithful few, but at hand to all, close enough that it could be real for anyone.

The people of Israel were waiting for their kingdom to be restored to them. And the Good News that Jesus brought was this: The Kingdom of God is already here. And the response he asked? Repent and believe the good news. And if the good news was that the kingdom was here, then repentance could only mean one thing – the change of life implied by really believing that news, really believing that the kingdom was here, was real, was something that could be lived here and now.

This kingdom is not something that can be identified, of course, with any earthly nation or political movement. Nor can it be identified with the Church, even the Church universal, for Jesus declared the time fulfilled before his ministry, and long before the birth of the Church at Pentecost. Organizations may be part of it, and we surely hope that the Church at least overlaps with it, but the Kingdom is never limited to any human construct.

But nor must we over-spiritualize it as ‘the kingdom of God is within our hearts’. That’s not an image Jesus ever uses. Instead he uses the image of God’s kingdom being ‘at hand’ – close enough to touch. In the words of ‘Fat and Frantic’ – an English pub band of the 1980’s that I’m sure you’re all familiar with:

God’s kingdom’s something you can touch and taste; when each one gets his dignity and folks don’t go to waste.
they tell me it can never be; will always be a fantasy; but I pray ‘may your kingdom come’ and that I plan to see.

And indeed, each one of us has prayed those words many many times – probably most Sundays of our lives – ‘may your kingdom come, may your will be done on earth’.

The Good News that Jesus brought is that this Kingdom, this hope of people living in relationship with one another, with God and with God’s creation, this place where lives are not wasted; this is at hand. This is something that we can reach out and take hold of. This, indeed, is something we can live.

And the response that Jesus demands is to believe that this is so. Not just believe as a mental assertion or statement of doctrine, but believe – live as if it were true. For if we really believed that it was possible for us to live like this, if we really believed it was possible for the world – or even our small corner of the world – to look like God intended it to look, wouldn’t we be compelled to live in a way that would be in keeping with that vision.

Or, to put it another way, if we really believed that the kingdom of God was at hand, wouldn’t we want to look like citizens of that kingdom? A wise friend once suggested to me that the Gospel was simply this: “God has saved you. Now live as if you believed it were so.”. In similar vein I’d paraphrase Jesus’ words like this: “God’s kingdom is here. Live as if you were a citizen of it.”

And when he taught us to pray “let your Kingdom come”, the Lord’s Prayer goes on to spell out what God’s will, God’s Kingdom looks, what it is that the citizens of the Kingdom of God will make real in the world of God.

When we pray ‘give us today our daily bread’, we know that in the kingdom, all have what they need to survive. No-one dies for lack of food, clean water or medicine. No-one is wasted through lack of education or opportunity. And it is the citizens of the Kingdom who, inspired by the Spirit of God, make it so.

When we pray ‘forgive us, as we forgive others’, we learn that the kingdom is no place for grudges, and no place in which to remain bound by guilt. It is a place of reconciliation, a place in which restoring relationships is of the highest priority. And it is the citizens of the Kingdom, themselves forgiven by God, who make it so.

When we pray ‘save us from (or in) the time of trial’, we understand that in the kingdom no one is left to face hardship or trials alone. The parent struggling with a child, the carer looking after an aged parent, the mentally disabled who can’t find or keep a home – none of them are left alone. Even those whose trials come from their own actions; the drug abuser, the criminal, the drunk driver, the terrorist; none are left to face the consequences alone. And it is the citizens of the Kingdom, knowing the love and fellowship of God, who make it so.

And when we pray ‘deliver us from evil’ we recognize that there is great evil in the world, and that in the kingdom, those endangered by evil – by greed, violence, climate change – whether it be personal evil or social evil – are delivered. And it is the citizens of the Kingdom, eyes opened by the vision of God, who make it so.

That can only be an incomplete glimpse, but perhaps it is at least a hint at the idea, the possibilities, the hope of the good news of the kingdom, and the implications for those who hear Jesus’ call to repent and believe.

God’s kingdom is here. Live as if you were a citizen of it.