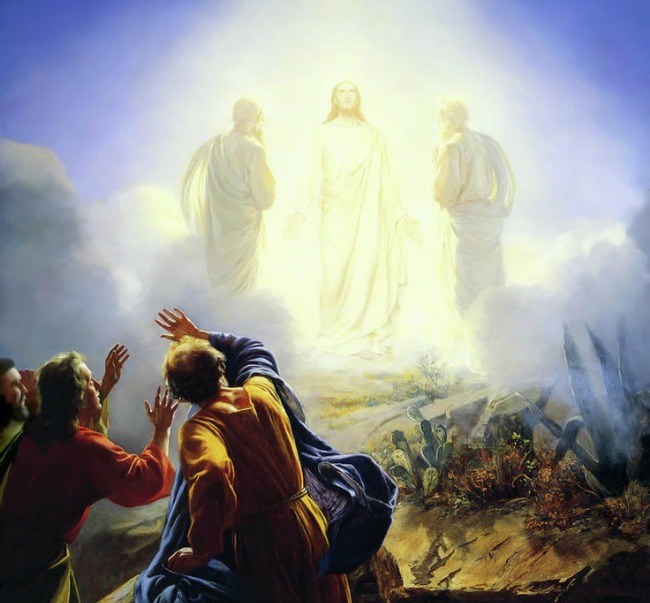 For the past few weeks we’ve been looking at the stories around the very start of Jesus’ ministry; this week, as we prepare for the start of Lent, we move to a story that marks the beginning of the end.

The transfiguration, the archetypal mountaintop experience. A story strange to our ears, alien; figures from the distant past, dazzling lights, a voice from a cloud.

It’s a story so dense with imagery, with allusions, that it’s sometime hard to know where to begin, how to get in. So perhaps we might start with the punchline: “This is my son, the beloved, listen to him”.

You recognise those words? Remember where else you’ve heard them? Those were the words of God at the baptism of Jesus, right at the start of his ministry. And now, as he starts to move into the final phase of his ministry, as he starts to teach the disciples about his forthcoming death and the persecution they in turn will face (the main themes of chapter 8 in Mark’s gospel), the words come again. As if to say – don’t stop listening. Now the message is getting hard to hear, hard to accept. Now being one of Jesus’ friends is starting to get controversial, even dangerous – don’t stop listening now.

But let me backtrack. Before God speaks, Jesus has been seen in conversation with Moses and Elijah. To the Jewish Christian reader of the first century Church, this image of Jesus meeting with, and presumably being endorsed by, Moses and Elijah was a crucial declaration – that by becoming a follower of Jesus they were not betraying their heritage, not leaving the faith of their forefathers, but continuing in their footsteps.

But why Moses and Elijah? Though they are very significant figures in the Hebrew scriptures which we call the Old Testament, they are perhaps not the most obvious. There are other figures from Jewish history that maybe had a stronger claim. It was to Abraham that the people of Israel traced their heritage, to whom the promises of God had been made – the people named themselves as children of Abraham.

Or David, the great King. Is was to his rule, his kingdom, that the people looked back with nostalgia, the Kingdom of David that they expected to be restored, by one of his descendants.

David, the King, Abraham the patriarch.

But they aren’t the ones there.

And perhaps that’s the point. For Abraham represented the genetic, family and cultural heritage from which the people of Israel arose, and David represented their military success as a nation and their political ambitions.

Moses and Elijah stood for two different strands of Jewish identity – Moses, the giver of the law, and Elijah, the great prophet. Here on the mountain with Jesus were personified the Law and the Prophets, the great tradition of holy and right living laid out in painstaking detail in the law of Moses, and the great tradition of justice heard in the voices of the prophets. And to strengthen that association, they met on a mountain – for it was on a mountain that Moses met with God to receive the law, and on a mountain that Elijah heard the still small voice of God.

And he doesn’t meet with David, for this Kingdom is not a political structure, or a military force.

But hold that thought, and backtrack a little further. You might have noticed that today’s reading began at verse 2. Let me read you verse one:

“Truly I tell you, there are some standing here who will not taste death until they see that the kingdom of God has come with power.”
The context for Jesus’ encounter with Moses and Elijah was this declaration of Jesus that, very soon, those present would see the Kingdom of God come with power.

And then on the mountain top, in a fairly clear demonstration of God’s power, Jesus becomes dazzling white (in an obvious echo of the way Moses’ face shone when he had been speaking with God), meets with Moses and Elijah, and his followers hear God’s confirmation of of his work in the voice of God.
The Kingdom of God, is at hand, Jesus has said elsewhere. The kingdom of God is powerfully advancing, he has said elsewhere. The kingdom of God has come with power, he declares on the mountaintop.

And the meeting with Moses and Elijah is more, then, than just a confirmation of the Jewish-ness of Jesus’ message. Moses and Elijah are a declaration of what the Kingdom of God represents, what it stands for.

Moses and Elijah, the Law and the Prophets, did not represent who the people were by birth, or nationality: they represented how we live before God and with one another. And this is the power of the Kingdom. Not one that derives from a successful army, as David’s did, or from being the father of a great family, as Abraham was, but from living in the way of God.

And living according to the ethical standards of the prophets, with their concern for the poor, the outcast, the foreigner, the widow, the orphan, the sick.

It is these strands of Jewish life, these elements of the story of the people of God that Jesus names, over and again, as the heart – the power – of his Kingdom.

And then, thrown into this story of great inbreaking of the Kingdom of God with power, we find ourselves, in the figures of Peter, James, and John.
Peter – good old impulsive Peter – so often the butt of the joke in this story. We’re told he wants to hold onto something transient, wants to take this spiritual experience and build a memorial.

And sure, he missed the point, with the benefit of hindsight that’s clear enough. But I’m in no hurry to criticize him for wanting to do something, to recognise the significance of what he saw. And so he suggests building three tents, dwelling places – actually, the word is ‘tabernacle’; the holy tent that the people constructed before they had a Temple; the place where God dwelt amongst them.

And in his enthusiasm, Peter would build not one, but three. And it is at that moment that the voice of God interrupts: this is my Son – listen to him.

Peter saw three great figures; the law, the prophets, the messiah. But the voice drew his attention to just one. The son. I’m pleased with him. Listen to him.

Peter probably felt that by suggesting three tabernacles, he was honouring Jesus, giving him the same status as Moses and Elijah. But in the presence of these three great figures, the voice says “listen to him. Listen to this one.”

This was the message that Peter would pass on to all in the early Church, was that it was Jesus that he needed to hear. That the conversation of Jesus, the law and the prophets, was not a conversation of three equals; but that both Moses and Elijah, both law and prophets, were to be heard through the voice of Jesus.

Which, when you come to think of it, is pretty good advice for us when we read and struggle with some of the Old Testament – the demands of the law, the challenge of the prophets. That we do not ignore them, we cannot pretend that they are not part of the conversation, the history, the story of faith: but that we read them through the lens of the life of Jesus. That we read the military history of Israel through the command to love your enemies; that we read the exclusion of the unclean though Jesus’ embrace of the excluded; that we read the patriarchy through Jesus’ welcoming of women and children.

And, perhaps more than that, as we head into Lent, this time of reflection and preparation for the events of Holy Week: that we read those stories through the lens of the death of Jesus. For so much of the Old Testament – like so much of all human writing – is told as if what mattered was to win, the triumph over adversity, to be on top; but the truth of Easter week is that that is not necessarily where God is to be found in the story – that God is as likely to be found pushed to the edges, found in the courtroom as the defendant, not the judge, found dying in the rubbish tip outside the town, found defeated in the borrowed grave.

And that victory was not won by going head to head with evil, but by turning the other cheek, walking the extra mile, giving the cloak, pushing evil to its limits and finding that love can go further still.

That the law of Moses, with its demand for purity, and the prophets with their call for justice, make sense only in the light of the love that they are both reflections of.

The love of which God said: this is the beloved. Listen to him.