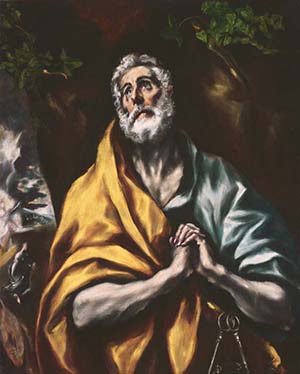 The great commission, Jesus’ charge to the first believers, was not to set up a Church, not to gather in worship, not to do good deeds, but to make disciples. To show others how to follow, and learn from, him. Not that we don’t do all those other things; but they aren’t what comes first. First of all, we are people who follow Jesus, who learn from him, who invite others to do the same.

Discipleship is, as it were, the main game: the rest follows. So over the next six weeks we’re going to look at six of the early followers of Jesus: Peter, Mary Magdalene, Lydia, Zaccheus, John, and Mary, and see what we can learn from them about learning, how we can follow their example in following.

So today, Peter (also known as Simon). One of the first disciples of Jesus. And two stories from his life – two stories, which you might notice, have a lot in common with one another…

But first, just a note about the name. We probably all know the story of Jesus giving Simon the name Peter, the rock; although its actually quite likely that Simon already had the name Peter as well – it was common practice in the day of Jesus for Jews to have both a traditional name, used within the community – Simon – and a Greek or Roman name (like Peter) that was used in more cosmopolitan settings. Just as some migrants to Australia adopt a more Anglo name that they use at work, and with their friends, while still using their original name in the family and their migrant community, so it was with the Jews – they were, after all, used to being under foreign rule.

So when Jesus said to Simon “from now on you will be known as Peter” he may not have been giving him a new name so much as a new role, recognising that as Jesus’ disciple he would find himself outside the Jewish community as much or more as within.

[Jesus] said to Simon, ‘Put out into the deep water and let down your nets for a catch.’ Simon answered, ‘Master, we have worked all night long but have caught nothing. Yet if you say so, I will let down the nets.’ When they had done this, they caught so many fish that their nets were beginning to break. … when Simon Peter saw it, he fell down at Jesus’ knees, saying, ‘Go away from me, Lord, for I am a sinful man!’ … Then Jesus said to Simon, ‘Do not be afraid; from now on you will be catching people.’ When they had brought their boats to shore, they left everything and followed him.

Jesus had been teaching the crowds from in Simon’s boat, a little way off the shore, so Simon had most certainly heard all that Jesus had to say. Perhaps that is why his response to Jesus’ ridiculous request, to go back out into deep water when the whole night had been spent fishing in vain, was “if you say so”. He had heard something from this son of a carpenter that made him willing to listen.

But I want to focus on Simon’s response to the miracle: realising there was something about Jesus, his instinct was to pull away. “Go away from me Lord, for I am a sinful man”. Recognising something of God in Jesus, and knowing himself, his gut reaction was to say “I can’t be near you. I’m not like you. I’m not good enough. I don’t deserve this. You need to find some good people.”

Fast forward three years. Three years of travelling with Jesus and learning and watching; three years, in short, of being a disciple. To another story, another miraculous catch of fish. This story is set after the resurrection; and at least as importantly, after Peter has publically denied knowing Jesus three time…

Just after daybreak, Jesus stood on the beach; but the disciples did not know that it was Jesus. Jesus said to them, ‘Children, you have no fish, have you?’ They answered him, ‘No.’ He said to them, ‘Cast the net to the right side of the boat, and you will find some.’ So they cast it, and now they were not able to haul it in because there were so many fish. That disciple whom Jesus loved said to Peter, ‘It is the Lord!’ When Simon Peter heard that it was the Lord, he put on some clothes, for he was naked, and jumped into the lake.

This repeat of a miracle surely sent Peter’s mind back to that first meeting with Jesus three years before, back to his original recognition of something of God in Jesus, back to his recognition of his own shortcomings and his desire to withdraw from this holy man.

But something has changed. Something is different this time. Even though Peter now has something really specific to feel guilty about – his repeated denial of Jesus outside the trial – now his reaction to the works “It is the Lord” is no longer to flee from him.

Instead, he flees towards him.

So eager is Peter to see Jesus again he abandons the others, jumps from the boat and swims ahead.

“Lord, go away from me, for I am a sinful man” has been transformed. Now we have the Simon Peter who said “where else would we go?”, and who knows that despite his failure and betrayal of Jesus, there is only one place that he wants to be.

There are lots of lessons we could learn from Simon Peter. His willingness to take the risk and step out of the boat to walk on water; his daring to name Jesus as the Son of God; the questions he asks when everyone else is just thinking them.

But those things seem to run through his whole life; they seem more like part of his unique character, part of who he is, than specially to do with him being a follower of Jesus.

Here, though, we see a clear change in Peter, a difference between the man who first met Jesus and the man who had followed him.

Three years as a disciple of Jesus has taught Simon Peter one lesson, at least: that when he knows that he is not worthy of God, not good enough, when the things that he has done rise up within him and threaten to choke him, that is reason to move towards Jesus, not to push him away.

It’s probably the very start of discipleship: to genuinely understand what Peter had grasped – that when we have failed, the way ahead is towards Jesus, not away in shame.

Because the truth is, we have, and do, and will fail. The path of discipleship is not one of perfection, but one of ever-returning.