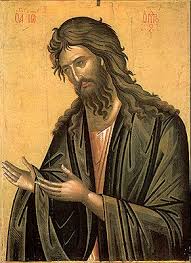 Luke 3:1-6
John the Baptist is a bit of an odd character.

I mean, at least according to Matthew’s account, there’s the whole camel’s hair, locusts and wild honey thing. Now you realise that I’m not a big one for dressing formally, but even so, camel’s hair is, well, a bit odd for my taste. And living in the desert, eating locusts – it makes him seem a figure of fun, someone you might well go to see, and talk about, but not someone to be taken seriously. Not someone that changes anyone’s life. At least, not the life of any ordinary person, anyone like us.

But if you compare John to many of the Old Testament prophets, you pretty quickly see that he was very much one of them. In their mould, both in his character – eccentric, radical, memorable – and in his message – abrasive and comforting by turns, uncompromising always.

And the gospel writers take John very seriously. For he plays a pivotal role, linking the ministry of Jesus, the Messiah, back into the ministry of those Old Testament prophets, showing Jesus as emerging out of their faith, out of the Hebrew tradition.

And so, in today’s gospel reading, John comes proclaiming “a baptism of repentance” – a claim that the people of God have gone away from the ways of God, a claim which is certainly very much the voice of the Hebrew prophets.

In particular, it seems that John was aligned with, if not part of, the Essene; a Hebrew group that had withdrawn from the mainstream into the wilderness to seek a purity of faith. It is thanks to the Essene that we have the Dead Sea Scrolls, for they were scrupulous in their copying and recopying of the law and the prophets.

And their belief was that the nation had gone astray, that their occupation by Rome was the modern day (for them) equivalent of the Babylonian exile – a punishment from God intended to drive the people of Israel back to the purity of the Mosaic law.

But there is another aspect of John’s message that was very in keeping with the prophetic tradition, and which plays on our minds in advent, and that was his expectation of one to come. He was, as Luke describes, ‘The voice of one crying out in the wilderness: “Prepare the way of the Lord…”’

Which are words we’ve often heard. But I wonder if you ever wondered what they mean. Why did Jesus need anyone to prepare the way, to make things ready for him? Why would God need a man like John the Baptist as a forerunner? Why did Jesus need a herald?

But when you start to think about that question, it turns out to be just a small part of a much bigger question – why does God need people to do anything at all? God, is the creator, the sustainer of the universe – why could God possibly need help from people God created? And yet throughout the story of the Bible we see that God has had a role for humanity; from the origins poem of Genesis, where we are given responsibility for creation, to care for the garden, the plants and animals – to look after the world God had created; the story of Israel, called to be a people of God, a light to the nations, in order to bring God’s way to the world; and to the New Testament; John the Baptist, preparing the way, the disciples, working alongside Jesus, the Apostles, carrying the message of Jesus to the four corners of the world. The Church, through the ages, and to the present day, charged with the mission of continuing the work of Jesus, continuing the proclamation of the Kingdom of heaven in word and action.

Surely God could have done all God wanted to do without relying on people to help? Especially as, almost every time God does rely on humanity, we mess it up.

And yet, this seems to be the way that God chooses to work. Not to do everything alone, but to enlist partners, to create partnerships. Throughout history, God has chosen to use us as collaborators. God gifted us with imagination, with intelligence, with the ability to love and be loved, with resources and abilities and insights – and with those gifts, has given us the responsibility of living as God’s partners, creating in cooperation with God, living and loving and serving alongside God, healing, reconciling and sustaining in the name and power of God.
It seems as if God chooses to take the risk of giving us these roles, giving us jobs that matter, knowing that we can never do them right, the way they would be done by God.

So even when it came to the incarnation, the great mystery of Christmas, when it came to God taking human form and living amongst us, God chose ordinary people to complete parts of the task. Elizabeth and John to prepare the way. Mary to carry the child, and Joseph to be her partner in raising him. Prophets and prophetesses to proclaim the significance of the baby. Shepherds and magi to witness the birth and protect the young child from the jealousy of kings.

For it seems that this is something fundamental to the very nature of God, the very nature of creation: that engaging in partnership with us, empowering us and challenging us and charging us with real responsibility, is as important as the outcomes – that the way God’s work gets done, the team that gets built by God to do it, matters as much the work itself.

For this is, and has always been, the nature of God’s love. We as Christians do not worship a God of abstract love, a standoffish deity who wishes us well but remains aloof; but nor do we worship a God of smothering love, an overanxious helicopter parent who coddles us in cotton wool and never allows us to get anything that matters wrong.

But where John was still very much in the tradition of the lone voice, the individual called by God, despite their personal failings and weaknesses, and given a meaningful, important job to do, the one who would come after him did something new.

For the way of Christ was not to call one, but to draw together many. To draws those who followed him, even from the very beginning, into communities of faith that bring from us our very best at the risk of also exposing our very worst; God the parent ever guiding, prompting, suggesting, but never taking over.

This grace would draw us away from our obsession with individual success and achievement, and challenge us instead to the far greater task of building the community of Christ which is both an end in itself, and the means to much greater things.

This is the grace that walks beside us as we walk together. It is the love which reconciles us to one another, calls us into the family of God, empowers and inspires us, and sends us as servants and agents of that same community building, reconciling, team-working love.

That is the grace we celebrate coming into the world, at work in the world.