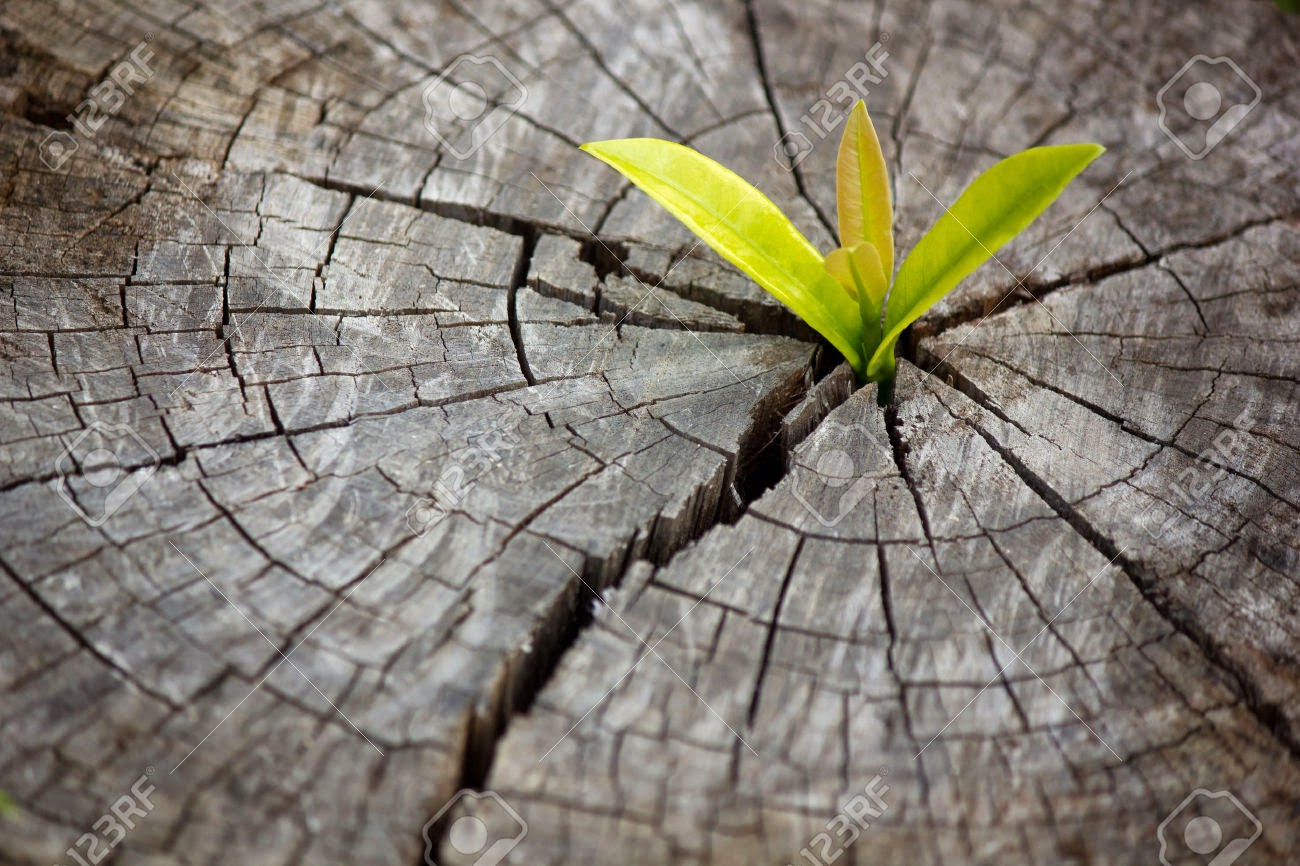 By Chris Goringe in Sermons on December 8, 2019

A shoot shall come out from the stock of Jesse, and a branch shall grow out of his roots.

How timely an image is this for us in New South Wales at the moment, as we watch the news of bushfires and breath the smoke blanketing the city.

For the image that the prophet uses, as a promise of hope, a promise for the future, is one that we are all familiar with in the Australian bush; the image of new growth from a stump that seemed dead, of green shoots emerging from roots which once supported a mighty tree.

These were the words, this was the image, that Isaiah used to comfort and reassure the people of Israel as they faced the collapse of their once-great culture; as their nation collapsed into bitter internal division and infighting, facing enemies bother within and beyond their boundaries. A shoot shall come out of the stock of Jesse, a branch from his roots.

From what has been destroyed; the tree which has been cut down (or burned) may look like it has no future, but new life will come to it, will come from it.

The words were first spoken to the people before the exile, but written down and kept alive through the decades in Babylon and Persia, a promise of God that was fulfilled in the days of Ezra and Nehemiah, in the reestablishment of the nation, the rebuilding of the Temple, the return of the people to Jerusalem.

And they were words much loved by the Jewish people in the days of Jesus; once again feeling that though they might still be living in their own land they were nonetheless exiled in spirit, ruled not by their own kings but by Caesar, their worship of God at best tolerated, and often defiled, by the Roman religious traditions.

Isaiah’s words stood for first century Jews as a promise just as they had for the Jews in Babylon: out of the ruins, out of the cut down stump, out of the burned-out bush, new life will come.

Even in the darkest of times, God’s promise is of hope for the future.

Even in the time of deepest violence, God’s promise is of a future of peace.

But, as we reflected last week, this peace does not just happen. There is no expectation that people will simply start being nicer to one another, and that peace – between individuals, between communities, between generations, between races, between nation – emerges out of an increasing human morality.

No; the peace will come because God – or the one that God shall send – will judge, and will judge with justice.

And this judgement will be based, not on what he sees or hears; not on surface impressions, nor on the words spoken by those with the loudest voices or most prominent pulpit or best social media presence, but with righteousness – that is, with a deep and true sense of what is genuinely right.

Look at the words used by the prophet to describe the spirit of the Lord which will be upon this ‘shoot of Jesse’; wisdom and understanding, counsel and might, knowledge and the fear of God. Four of those six description – wisdom, understanding, counsel, knowledge – have to do with knowing and communicating the truth. And indeed, the fear of God too is ultimately about right knowledge, a proper understanding of the relationship we stand in before our creator. The Spirit of God that is on the shoot from the stump is that of knowing what is true, what is real, what is right.

And how amazing are those words to hear in our modern day. In an age of fake news, an era in which it appears that advertisers, politicians, business leaders, often feel that they can simply lie with impunity, just make stuff up with no consequences; in which a lie repeated loudly and often seems more influential that truth, in what social commentators are increasingly describing as our ‘post-truth’ world, how much would we long to hear a voice which speaks with righteousness, with knowledge, with wisdom and understanding, with counsel and truth, and with the fear of the Lord.

And once again, let us remember that the words spoken by the prophet, while most fully and truly fulfilled in Jesus, are not exhausted by him; for they are words which describe the character and nature and values and longings of God; and so they are words that describe others, both before Jesus and since, indeed, in our present day, upon whom that same spirit rests.

George Orwell is often credited with the quote “In times of universal deceit, telling the truth is a revolutionary act”; while it certainly reflects his thought there isn’t actually any record of his saying or writing it (it certainly isn’t in nineteen eighty four, the most common attribiution).

In fact, the origins of the saying are older, and in some ways more profound – the political scientist Antoni Gramsci, wrote in 1919, “To tell the truth, to arrive together at the truth, is a communist and revolutionary act.”. He was writing in 1919, so his understanding of ‘communist’ was rather different, and rather more optimistic, than ours.

It’s what John the Baptist was doing in Matthew chapter 3, when he greets the Pharisees and the Sadducees who came to be baptised with the crowds with those generous and friendly words “you brood of vipers”. And lest we put that down to John’s rather acerbic personality, don’t forget that Jesus called the same group “whitewashed tombs” – beautiful on the outside but inside full of death and decay. Seeing and speaking the truth, even, sometimes, at the risk of offending.

In the past few weeks, over 60 people, mostly children, have died of measles in Samoa. Deaths which are the direct result of lies told by anti-vaccination campaigners.

Untold numbers around the world have died as a result of smoking, decades after, we now know, tobacco company executives lied about and concealed, again and again, what they knew about the health effects and addictive properties of nicotine, and continued to promote them, especially in the developing world, as healthy.

And how many around the world will die of the effects of climate change, in part because petrol companies hid internal documents – their own research, which they concluded proved a link between their products and global warming – for almost forty years?

But the scriptures do not allow us to separate peace from justice – for with righteousness he will judge and with equity he will decide, for the poor, for the meek.

And justice in turn, flows from truth, from transparency, from knowledge of what genuinely is and is not so.

So perhaps one way that we might enter into advent, that we might prepare ourselves for Christmas, is to renew our commitment, as God’s people, to be people of truth. Not just people who do not lie, whose words can be trusted, but people who speak the truth. Even when it isn’t popular, even when those who hold power would rather we were silent (or even create laws to silence us), may we be people of the truth.