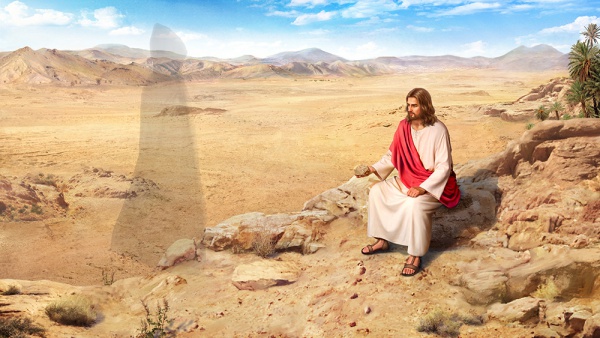 Encounters with Jesus… The devil

For the next six weeks, as we journey through this time of Lent, the traditional forty days that lead up to Holy Week, to the death and resurrection of Jesus, we’re going to make that journey through a series of encounters with Jesus.

Over the coming weeks we’ll look some individuals, some groups, and some crowds whose meetings with Jesus are recorded in Matthew’s gospel, reflecting on how he responds to those who seek his help, those who challenge him, those who praise him, those who criticise him.

But we start with an encounter rather different from all the others; for we begin with Jesus being led by the Spirit into the wilderness, to be tempted by the devil.

Actually, that word ‘tempted’ is one we might need to pause and consider for a moment. Because this is one of those places where translation make it really hard to capture the meaning. The word that gets used couple of times in these opening verses really doesn’t mean temptation in the sense that we tend to use it. If you think of the word temptation, you probably think of something that you would like to have or to do (quite possibly something you would like to eat) that you know you shouldn’t. The focus is on the thing that you are tempted by, and on the possibility of failure.

That is to say, when we speak of being tempted, the focus is negative; it’s on the bad, and on our desire to choose the bad.

But the way the word was used in first century Greek, both in the translation of the Hebrew scriptures and in contemporary secular usage, was much more focussed on the person being tempted than on the temptation itself, and focussed not so much on the desire to choose the bad, but on the ability of the individual to hold on to the good in spite of temptation.

It’s the same subtle difference in meaning that is reflected in modern translations of the Lord’s Prayer – where the traditional form read “lead us not into temptation”, modern version use “save us in the time of trial”: taking the focus off the desire to do wrong and putting it onto our ability, in God’s strength, to stand firm.

The temptation described is a little like a test – like you’ve built a bridge, and you’re testing its strength: not because you want to break it, but in order to demonstrate to yourself and to the world (and, perhaps, to the bridge) that it is, in fact, strong enough.

Which perhaps gives us an idea of why our reading starts by emphasising God’s role in this whole event – Jesus was led by the Spirit into the wilderness to be tempted. The temptation wasn’t an accident, a side-effect of Jesus being in the wilderness. The tempting – the testing, the proving – was the point of the encounter.

And so Jesus is in the wilderness, hungry, alone, and the tempter, the devil, comes and speaks with him. And if you’re hoping that I’m going to venture an opinion about what that looked like, whether a spiritual being, or a physical person, or an internal voice, then I’m afraid you’re going to be disappointed. The scriptures never, as far as I am aware, give us any indication of what an encounter with devil looks, sounds, or feels like.

What we do have, though, is the name, diabolos. While it’s now a word with a pretty strong spiritual meaning, it comes from Greek legal terminology – one who bears false witness, who brings an untrue accusation against another. To slander, to wrongly accuse, to defame, to lie about someone else – in John’s gospel, Jesus names the devil as ‘the father of lies’.

And I believe that is key to understanding the temptations of Jesus. For the story that comes immediately before our reading today is the baptism of Jesus, which ends with these words: And a voice from heaven said, ‘This is my Son, the Beloved, with whom I am well pleased.’

And the story of the temptations begins with these words ‘if you are the Son of God’. You can get into the details of the temptations, the tests that are thrown at Jesus in this encounter, the idea that each of the specific tests is a temptation to take a shortcut, for Jesus to immediately claim for himself something that God has promised lies at the end of the road of hardship and suffering that Jesus is called to walk.

But at the core of the test, is this lie, this slander, this false accusation: “you aren’t really the Son of God”. Coming from a moment of amazing spiritual revelation in his baptism, in which God declares “you are my Son”, into a period of hardship in the wilderness, the question comes to Jesus “really? are you really the Son of God?”

And for me, that is where the story of Jesus’ encounter with the devil, the slanderer, connects with my story. Because I’m not tempted to turn rocks into bread, or throw myself off a tall building and trust God will catch me – those who know just how bad my fear of heights is will understand that that is probably the least likely temptation ever to work on me – and I’ve never been offered, nor do I expect to ever be offered, the rule of all the kingdoms of earth.

No, none of the specific temptations Jesus faced ring true for me. But the lie does.

“Are you really who God says you are?”

“Are you really sure you heard right?”

“Aren’t you just making it all up inside your head?”

And again, I don’t know whether these words take the form of a personified spiritual being, or of a structural system of evil, or of our own internal weakness and brokenness, or of the words that others speak to us – honestly, I suspect it’s option (e), all of the above.

But the heart of the lie that we are tested by is this: “do you really believe God loves you? you? seriously?”

And Jesus’ response is to respond with what God has said, to place his confidence in the truth declared, in the higher authority. I am who God says that I am.

God declared Jesus to be God beloved son, and that is sufficient answer for all the slander and false accusations thrown at him

And God has declared you to be God’s beloved child.

You are who God has said you are.

Not what the world tells you.

Not what the Church tells you.

Not what you tell yourself.

You are who God says you are – child of God.