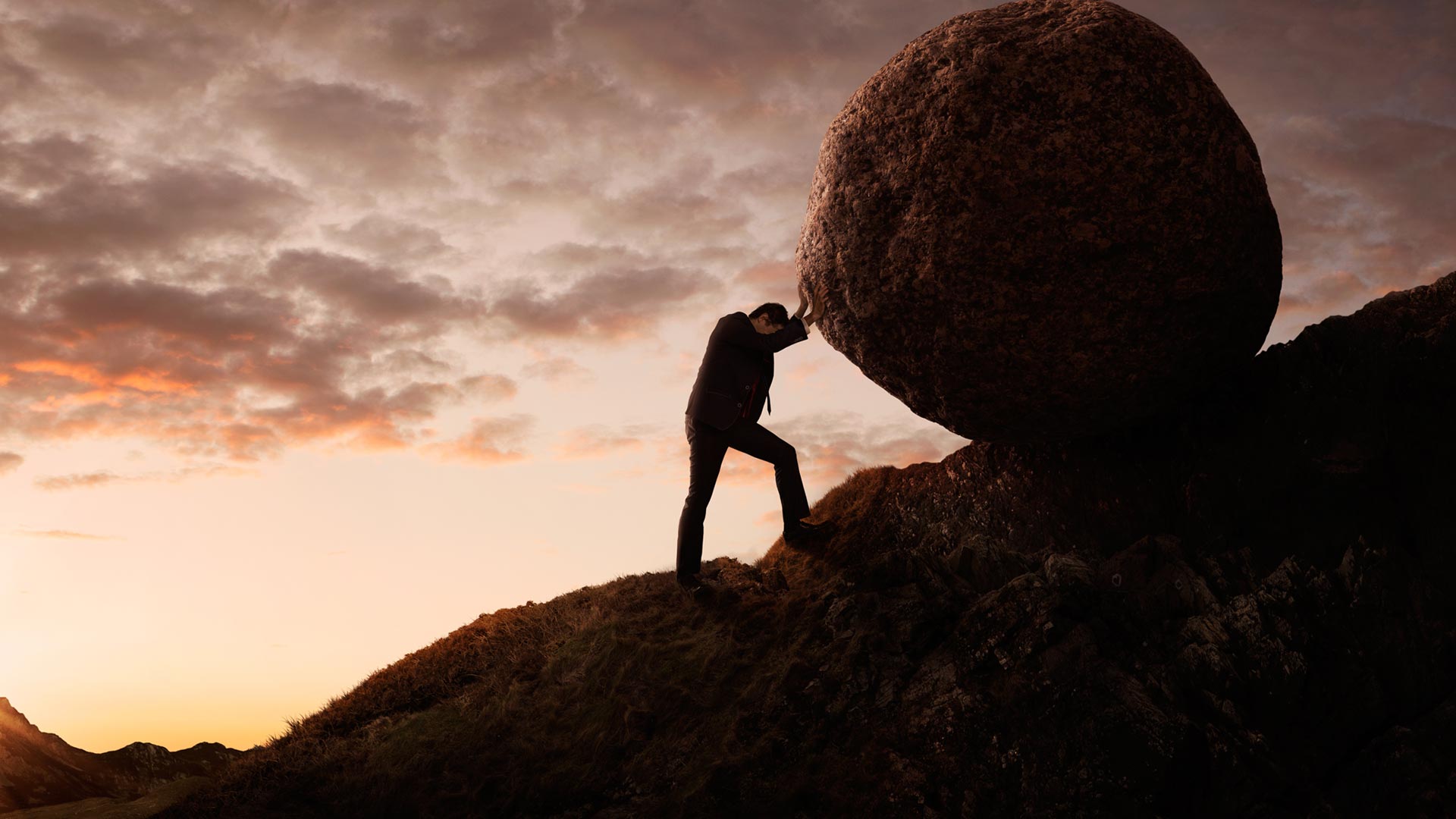 We are… Still Struggling

So over the opening chapters of the book of Romans, Paul has been steadily building up his case for the amazing central truth of the gospel – that it is through Jesus Christ, through the gift of grace, that we have standing before God.

He began, in opening chapters that we didn’t look at in detail to declare the, some might say self-evident, truth that no-one can ever stand earn the right to be accepted by God; that we all, regardless of our spiritual pedigree, our obedience to the rules, our conformity to religious tradition, we all have fallen short of the image of God in which we are created. That none of us are faultless, none of us live the lives of love that we know we ought to.

But God longs to restore us. God longs for us to be reconciled to one another, to the rest of creation, and to God, and so God has done what is necessary. God, by grace, has given us what we need – the gift of righteousness, the declaration that we are, despite all the evidence, innocent. By grace, and by grace alone, we have been saved; the unearned gift received by faith.

And as a result we are, Paul has also declared, dead to sin. The power of sin over us has been broken; we are no longer subject to its grasp, no longer captive to its consequences, no longer held as its prisoners. We have been set free from all of that.

But that freedom is not the freedom of absolute liberty, the freedom to do as we choose. Instead the freedom that we have been given is the freedom to choose in whose service we will live. Once we were slaves to sin, mastered by it, living in its ways; but now we have the freedom to choose to instead be slaves of righteousness; before we worked for the wages of death, but now, having been given the free gift of eternal life, we work for the reward of sanctification, the ever growing likeness of God in our lives.

It’s all such a beautiful image. We are servants now not of our selfishness, our greed, our prejudices, our self-serving rationalisations, but of righteousness, of God, of the Spirit of love, joy, peace, patience, kindness, and the rest. We have been given the power to choose the service of good over the shackles, addiction of evil, and as we walk in that service we grow more like the one who has called us.

So why, Paul asks, do I still do the things I have chosen to turn away from?

“I do not understand my own actions. For I do not do what I want, but I do the very thing I hate”

Who can honestly say that those words have never been true of them? Haven’t we all looked at something we’ve done, or even something we are doing, and asked ourselves ‘why?’? Not in the ‘well that was stupid sense’ – why did I think that on top of a wobbly pile of book was a good place to put a hot cup of coffee (a totally theoretical example, you understand) – but in  moral or ethical sense: ‘why did I behave like that? Why did I say those things? Why did I treat them that way?’

There’s a sense in that plaintive cry of regret that we somehow haven’t been who we feel that we truly are – or perhaps, that we haven’t been who we, in our better moments, have determined that we want to be. Our resolution, our integrity, our best intentions have fallen victim to something else.

This isn’t an experience, of course, that is solely that of Christians, or even of people of faith. I’d suggest that everyone with even an ounce of self-awareness knows this feeling, this experience of not acting like the person I see myself as, or the person I have decided that I want to be.

But the difference for Paul, and I’d suggest for us, is that for him the problem is not essentially a psychological one – why does my mind work in this way, why do my impulses overrule my better self – but theological. How is it that sin still seems to operate in me even when I am dead to sin, no longer a slave of sin, set free to choose to live as a slave of righteousness?

And in response to this theological problem, Paul wants to make three assertions: that the law is good, that we still struggle, and that we will be rescued.

First then, Paul’s claim – ‘if I do not do what I want, I declare that the law is good’. It’s a strange phrase, but I think at heart what he’s saying is this – the fact that when we do wrong we recognise it as such, the fact that we want to do right, is a declaration that this is such a thing as right and wrong, that there is a moral dimension to the universe, and that that moral dimension, the law, as he’s using the word here, is good.

But Paul’s argument here is more this: to say that one can be good, or that one’s actions were bad, is to declare that there is such a thing as ‘good’, and that it has, as it were, an objective reality.

And Paul’s claim goes one step further than that – not only is there an actual meaning to right and wrong, an objective reality to the ideas of good and evil, but we actually think that it is a good thing that it is so. Our desire to do right is a declaration that we believe that living in a way that is coherent with the moral nature of creation is the best way to live.

But Paul’s experience, like ours, is that we do not live up to that lofty ideal. We are still struggling.

And honestly, I don’t think this passage really gives us an answer to why. I have to say I’m not convinced that Paul had a good answer to that question; I’m not convinced that anyone does. You get a sense of that in the range of different ways that Paul speaks of the problem; the sin that I am free of still dwells within me; my inmost self at war with my members; my mind struggling against my flesh.

Paul comes really close here to a sort of dualism that he elsewhere strongly rejects. It’s not mind is good, body is bad, the dualism of Gnosticism; it’s a description of the experience: my deepest desire struggling against the faults and temptations and habits and instincts that are still very real within me.

It’s a picture of the craving of the addict who is determined to be free, to listen to the angel on one shoulder not the devil on the other. It’s the words of a man crying out to be rescued from the sin and death that seems to hold him captive even as he rejoices in his freedom.

And so he makes his third, and boldest declaration. “Who will rescue me?” he asks, “Thanks be to God through Jesus Christ our Lord!”.

There’s no argument here, none of the logical steps that Paul is so fond of, especially here in Romans (even though his logic often sounds strange to modern ears).

He simply declares his struggle (which is our struggle), his desperate desire to be able to live up to the calling he has accepted, to live in the way of God, his failure to do so and his desire over to be rescued – and then “Thanks be to God”

There is no resolution here: instead there is a declaration of faith. It’s a cry of trust, not of triumph – for in the very same words he declares both the struggle and the victory.

Maybe we’d like it if faith took all our struggles away. Not just our external struggles, great though that would be, but our internal ones, our wrestling within ourselves to be the people that God has created us to be, called us to be.

But we know it doesn’t. We know the struggle goes on. And so did Paul. Even as he declares freedom, he acknowledges that though it is now, it is also not yet.

And once again, we loop back to Paul’s central theme: that we are justified by grace, received through faith.

And not just once; God’s grace is not something that just deals with our past; it isn’t just the entry point, it is the path by which we walk. We aren’t just saved by grace, will live by grace. We don’t just need grace to enter into the presence of God, we need it every moment to remain there.

But, as Paul cried, “Thanks be to God through Jesus Christ our Lord!” – we have it; the gift of grace freely given and freely received.

And so it is that, in the very next verse, Paul will declare ‘there is therefore now no condemnation for those who are in Christ Jesus’.

But that’s next week.