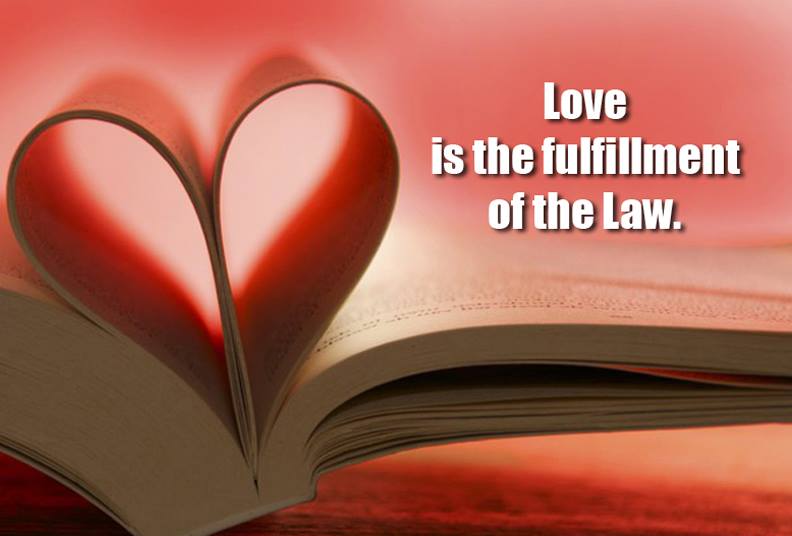 Love is the Law

So today we come to the end of our series on Paul’s letter to the church in Rome. And if you’ve only taken one thing away from the whole series, I’d like to think that it is this: Paul’s theology, Paul’s understanding of God and his understanding of our place before God, is completely caught up in the idea of grace.

Grace, the underserved, unearned gift of God, that declares us to be righteous, welcomes us into God’s presence, declares us to be daughters and sons of God, sets us free from the slavery to sin. Grace that we can only receive as a gift; can only receive by the simple act of faith that says, “even though I have no right to expect this, I trust the one who is giving it to me.”

In the ancient world the nearest parallel to the idea of grace, close enough that some of the same language that Paul uses of grace would apply, was that of patronage. Most of the economy worked by transaction – either the trading of goods, if you had the means of production (you grow your crop, you catch your fish, you build your chairs, and you trade what you have for what you need), or of labour – you hired yourself out, a day’s work for a day’s pay.

But in the wealthier parts of the empire, such as, of course, Rome, there was also patronage, especially of the arts. A wealthy patron would sponsor a musician or artist, who would then compose, or perform, or produce works of art which would act as way for the wealthy to show off their wealth and generosity.

There’s still a sort of transaction here, but the dynamics are very different. The patron would give a gift – referred to as a ‘grace’ – to the artist, who would then have a debt of honour to repay by producing the art.

And because it was not a simple transaction, there is a sense in which this debt need not be paid, and a sense in which it could never fully be paid. For there was no defined contract in patronage: the patron gave, and the artist produced as they chose – of course, fully aware that if their output was not satisfactory, there was little hope of future grace.

I mention this because it seems as if it is this idea, this image, that Paul is working with in the opening verse of today’s reading. He’s just been writing, in the previous verses, about paying what you owe – tax where due, respect where due, honour where due – and concludes here that we should have no debts except the one that cannot properly be repaid.

The grace of God creates a debt; the one debt that we can never repay; and Paul names it as the debt to love one another.

And here in these few verses he brings together all that he has said of grace, of the law, and of love. That in response to the grace of God, as a repayment of that debt, we are to love; and in doing so we will fulfill the law which grace has set aside.

Owe nothing to anyone except to love one another, for the one who loves another has fulfilled the law.

The commandments, Paul writes, are summed up in the command to love; so love is the fulfilling of the law.

It’s an interesting choice of words. Paul doesn’t say that whoever loves another has kept the law. For he knows perfectly well that that probably isn’t true. Indeed, he spent a whole chunk of the early part of the letter explaining that no-one, however good and however careful, can ever keep the whole of the law.

The one who loves another – the one who loves friend and neighbour and even enemy – will still break some, even many, of the rules and regulations that made up the written law of God in the Hebrew scriptures. Perhaps by ignorance of the detail of the law, perhaps because they find themselves in a position where they can see no way to practice love except by breaking the law, perhaps because their love, however deep and intention, is still human and still mixed up with our own selfish desires.

Living a life governed and directed and motivated by love is almost certainly going to mean that you break the written law less – for the law is there as a way of guiding us into the way of God, into the way of love – but as Paul carefully laid out, the written commands cannot possibly take us all the way to love; and sometimes, inevitably, love will lead us in extraordinary directions.

Throughout the letter Paul has wanted to hold two truths together as of critical importance to the Christian faith. Firstly, that we cannot be saved, cannot be righteous, cannot be God’s children, by our own efforts, but only by the gift of grace; and secondly that the fact that our actions do not earn us our place before God does not mean that we are free to live as we choose.

Here these two ideas come together; for love, Paul tells the Church in Rome, tells us today, love is at the same time, the reality of which the law was a shadow, the truth to which the law was pointing us, and the debt that we owe to God for the grace that has set us free from the rigid constraints of the written commandment.

And that’s why it’s really a good place to leave this letter. For though the next few chapters will continue to flesh out the implications of love for the way that we live together as a community, with these words the great themes of the letter are drawn together. The gift of grace, replacing the law, the patronage of God, freely given, leaves us with just one debt owing; the debt to love, a debt, by the paying of which we bring to completion the law from which that grace has set us free.

Free, with only one debt outstanding

The debt to love one another