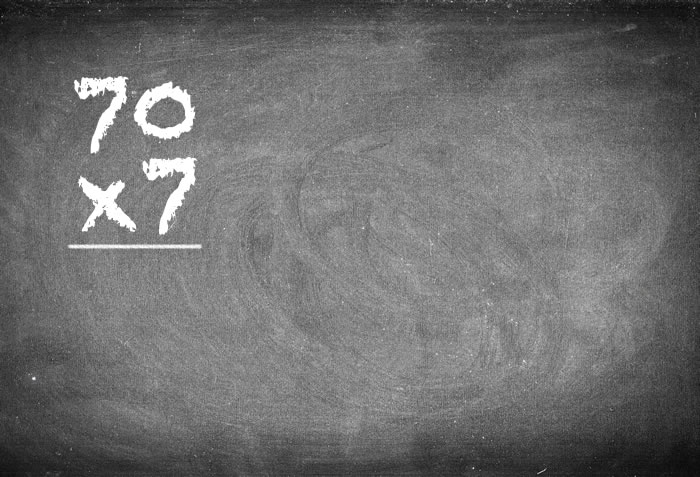 It’s almost as if Jesus thought that forgiveness was important.

In the passage that comes just before this, the passage we read last week, Jesus has been talking about reconciliation within the community of faith, within the body of Christ.

And he described a situation in which someone sins against us – hurts us in some way – and we go to them and point out what they’ve done, either by ourselves or with the support of two or three others, and they accept the correction, and seek to be reconciled. And then, Jesus says, “you have regained that one”.

In doing so, Jesus places an emphasis on reconciliation, teaching that when we are hurt, the aim of our response should not be self-justification, or, worse still, revenge, but, where it is possible, the offer of reconciliation.

But Peter has a problem with this. Peter is smart enough to see the difficulty, and bold enough to ask Jesus the question. And his problem is a real one, not easily of flippantly solved.

The problem Peter has links back to the themes we reflected on in the book of Romans. You’ll recall that Paul, in Romans, when preaching the good news of grace, of God’s forgiveness of us, felt he had to answer the rhetorical question “so if it is by grace, and not by what we do, that we are saved, can’t we just keep on sinning however much we like, knowing we will be forgiven?”

Peter, here, sees the problem from the other side: if I forgive the one who hurts me, won’t it just keep happening? If they know that I’m always going to forgive them, if they know that whatever they do, you’ve told me I must forgive, what will stop them from abusing that knowledge?

“So give me a limit,” he appeals to Jesus, since it seems clear to him that there has to be some point at which forgiveness stops, “tell me how many times is too many. Seven?”

And as so often seems to be the case, Jesus doesn’t answer the question that Peter asks him. Of course he seems to – he starts off by saying “not seven times, but seventy seven times”. But it seems pretty clear that Jesus isn’t advocating that we just need to keep a longer count before we stop forgiving, that seventy seven (or perhaps 490 – seventy times seven – the language is unclear), but that he’s telling Peter that he’s asking the wrong question.

That forgiveness isn’t about numbers.

And that it isn’t about numbers is emphasised by the parable that Jesus went on to tell. For the debt that is described in the start of the parable – ten thousand talents – is ridiculously, inconceivably, large. Different historical analysis gives different numbers, but it is far, far more money than a slave could ever conceivably owe to their King. Far more money than anyone other than a wealthy king would ever see in their entire life.

It’s not about the numbers, Jesus seems to be saying again, as he describes a debt so stupidly large that it could never have been incurred, still less could it ever be repaid.

It’s not about the numbers – it’s about the forgiveness of an inconceivable debt – it’s (harking back to Romans once again) about the act of grace that declares the unpayable to have been repayed.

That’s the starting point, Jesus tells those who are listening, the unrepayable debt has been declared forgiven, written off as a simple act of grace.

So then how do we treat our fellow servant? The one who owes us, in the parable, 100 denarii? Now that’s a more interesting amount of money. A denarii was the standard day’s wage for a worker, so 100 denarii is a lot of money – a third of a year’s income – but not an inconceivable amount. It’s a real debt, the payment of which would be a real hardship, and the writing off of which would be a real loss, but a debt that could, given time, be paid.

And when the servant demands repayment, the injustice of his action is so apparent, in the light of the forgiveness of debt that he has himself received, that even the bystanders, the fellow-slaves, are shocked, and take it to the king, demanding justice.

For – and notice this – this second slave has begged for more time in exactly the same way as the first slave begged it of the king: “Have patience with me and I will repay you”. Exactly the same plea for mercy in each case. And worse – when the first slave said those words to the king, there was no possibility that his promise to repay would be fulfilled, for the sum owed was so large. But the second slave, in promising repayment, was making a promise he could keep. Patience, in fact, would have been enough. But not even that is offered, still less the forgiveness he has himself received.

It’s not about numbers, Jesus tells Peter. It’s about starting the conversation with the knowledge that you have yourself been forgiven more than you could possibly ever understand, and with the willingness to forgive that comes from that knowledge.

But whenever we speak of forgiveness, and of the call on us to be willing to forgive those who have sinned against us, there is a danger that we have to guard against. For of course the doctrines of forgiveness that are such an important part of the message of Jesus have also been used in ways that are diametrically opposed to the gospel. The promise of forgiveness has been used too often to justify allowing those who have committed great wrongs to continue in positions of power – indeed, often to continue to harm others – because when their sins are uncovered they simply ask forgiveness from the Church.

So first, I think it’s important to put this back into the context: that Peter’s question arises from Jesus teaching about forgiveness and reconciliation in the situation where there has been genuine recognition of wrong and repentance of that wrong.

The forgiveness that gave rise to the question is not an unconditional forgiveness. It is not an automatic forgiveness. Indeed, in the teaching that we reflected on last week, though the emphasis was on the pathway to reconciliation, the possibility that there would be no way back was very real. Forgiveness only followed from a knowledge of wrong and an acceptance of the need to change.

So while forgiveness isn’t about numbers, it isn’t unconditional either. While there is no limit to forgiveness where there is genuine repentance, we are called upon to be wise as serpents as well as innocent as doves; to recognise that if past pleas for forgiveness have shown none of the change in life which is the fruit of repentance, we have every right to question the veracity of a repeat performance, to ask for more evidence before taking words at face value, especially when reconciliation involves putting oneself – or even more so, others, especially children – for notice that all this teaching is about how we respond to those who hurt us: it is not for us to forgive harm done to a third party – back into a place of danger.

In such situations even if one might forgive, it does not mean that you forget, or live as if there was no danger of a repeat. Forgiveness is not pretending it never happened. Forgiveness is not putting yourself back into danger. Reconciliation may look like the offering of a new, safer way of relating.

I don’t believe that the Christian teaching on forgiveness is ever a demand that we should place ourselves – or still more, others – back into danger.

But I do believe, and I think this is the point of the story that Jesus tells, and his seventy times seven answer to Peter’s question, that we need to start from a place of understanding that we have already been forgiven more than we could ever know or ask or conceivably repay.

And that our forgiveness of others, where there is a genuine desire for change and for the restoration of relationships, should start from that understanding. That it isn’t about how many times another has wronged us; that while it might be about keeping safe it is never about keeping count.

For if God kept count, how would we fare?