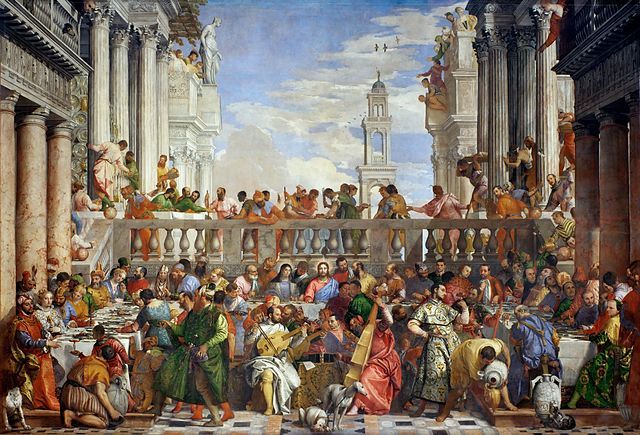 Last week the lectionary gospel reading gave us the difficult parable of the dishonest tenant, with its edge of violence and of judgement on those who have misused their positions of power and privilege to look after themselves at the expense of others, at the expense of justice and the good of all.

Today we are confronted with the far more violent imagery of the parable of the wedding banquet.

It’s a story which, on the surface, seems to paint God as a petty tyrant, unreasonable and irrational, lashing out with violence, not just directed at those who had rejected him and killed his servant, but destroying their entire cities in his petulant rage.

And then at the wedding celebration itself, having a guest bound hand and foot and cast out into the darkness for the crime of not following the dress code.

And it’s worth knowing that there are at least three main ways in which this parable has been read over the years. The first is to take it more or less at face value: God sends out invitations to the wedding (that’s normally read, on the basis of some references in Paul and in Revelation, as being between Jesus and the Church); those who reject the invitation (generally seen as the Jewish people of Jesus’ day) suffer God’s wrath and the invitation is resent to everyone instead of just the chosen few. But for those who come in, a certain standard is required: the wedding gown (again, generally linked with Paul’s words to ‘clothe yourself in righteousness’ – the invitation is God’s grace, but there is an expectation that those who come will also dress appropriately).

A second broad reading of the parable takes careful note of the fact that a very similar story is to be found in Luke’s gospel, but with a number of interesting differences. In Luke’s story there is no violence offered to those who refuse to come, just an every widening of the invitation until there are enough – indeed, the host even has his servant bringing the reluctant in by force. Matthew, in this reading, it is suggested, has adopted elements of the Jewish apocalyptic style in references to the burning of cities and the casting out into the darkness; adding conflict and violence on both sides to paint part of a titanic clash between good and evil, the sort of thing we see worked out in all its glory in the book of Revelation.

But I’d like to take a step back and ask a far more basic question of this parable. Because the main difficulty with the parable is that the behaviour of the King in the story is far more like that of a capricious, insecure tyrant than it is like the image of God that Jesus paints throughout his ministry. The King demands that there must be a good crowd for his event; those who snub him are destroyed – and not just them, but their whole cities – in an act of petulance worthy of a toddler. His demands for attention and honour are more reminiscent of certain modern day politicians than anything in the life of Jesus.

So the basic question is this: why do we assume the King in the parable is a representation of God at all?

There are two hints in the opening of the parable that that might not be the right way to read. Not definitive (as I said, there are many different ways this parable gets read) but enough to raise the question.

One is in the naming of the king. It’s lost in the translation, but in the Greek its oddly phrased: not just “…compared to a king who gave a wedding banquet…” but “…compared to a man, a king, who gave a wedding banquet…”. The main character is not introduced as a King, but as a man who is a king. Almost as if to emphasise the humanity of the figure – to get his listeners to think initially of King Herod, not King Yahweh.

For the narrative of violence then makes a great deal of sense. The Kings of the world – the Emperor and their local representatives – demand the obsequious attendance of their conquered subjects and lash out with disproportionate violence at anything that might be an act of defiance or rebellion. The King has to have a crowd at the celebration of the wedding of his son – that is a matter of honour. To have his ‘generous invitation’ rejected by his subjects is an insult, a snub to his pride, and he will not let it go.

It’s exactly the sort of behaviour that the people of Israel (and indeed, of the whole empire) were all too familiar with; the violence of the insecure paranoid ruler. Those who refused to come pay the price of not honouring their rightful king.

Matthew’s first readers had witnessed the ultimate rejection of a King’s invitation in the crucifixion of Jesus, and they had witnessed that this was not the way that God had responded. They knew that Jesus’ final words were of forgiveness, not of anger. They had seen the empire of Rome lash out with military force against Jewish rebellion, in the time of the Maccabean rebellion, and they would soon see it again in the uprising that would lead to the destruction of Jerusalem and ultimately total defeat at Masada.

But when the people rebelled against the Kingdom of God, God’s response had not been anger, not been violence, not been bloodshed, but had been resurrection and reconciliation.

In last week’s Gospel reading, the story of the dishonest tenants: Jesus asked how a landlord would treat those who refused to pay their share and ultimately killed his son. Those listening replied “the landlord will kill those dishonest tenants and give the land to others”; but while Jesus picked up on the vineyard being taken away from those who had failed in their duties and given to new tenants, he did not echo the call for the violent killing of those who had killed his son.

And here again, it seems as if Jesus is so much telling us what the Kingdom is like as he is inviting us to compare the way of the kingdom of God to the kingdoms of earth. Parables, it has been said, are here to make you think, not to tell you what to think.

What we don’t see is the tyrant, the ruler so insecure in his position that he chooses collective violence against entire cities.

What we don’t see is a King full of rage at the idea that his subjects might not accept his call.

What we don’t see is a King who reacts with anger at a dress code violation.

Instead we see an invitation to be part of something that is so different, part of a movement whose ruler is not a man who had become a king, but a king who had chosen to become a man.