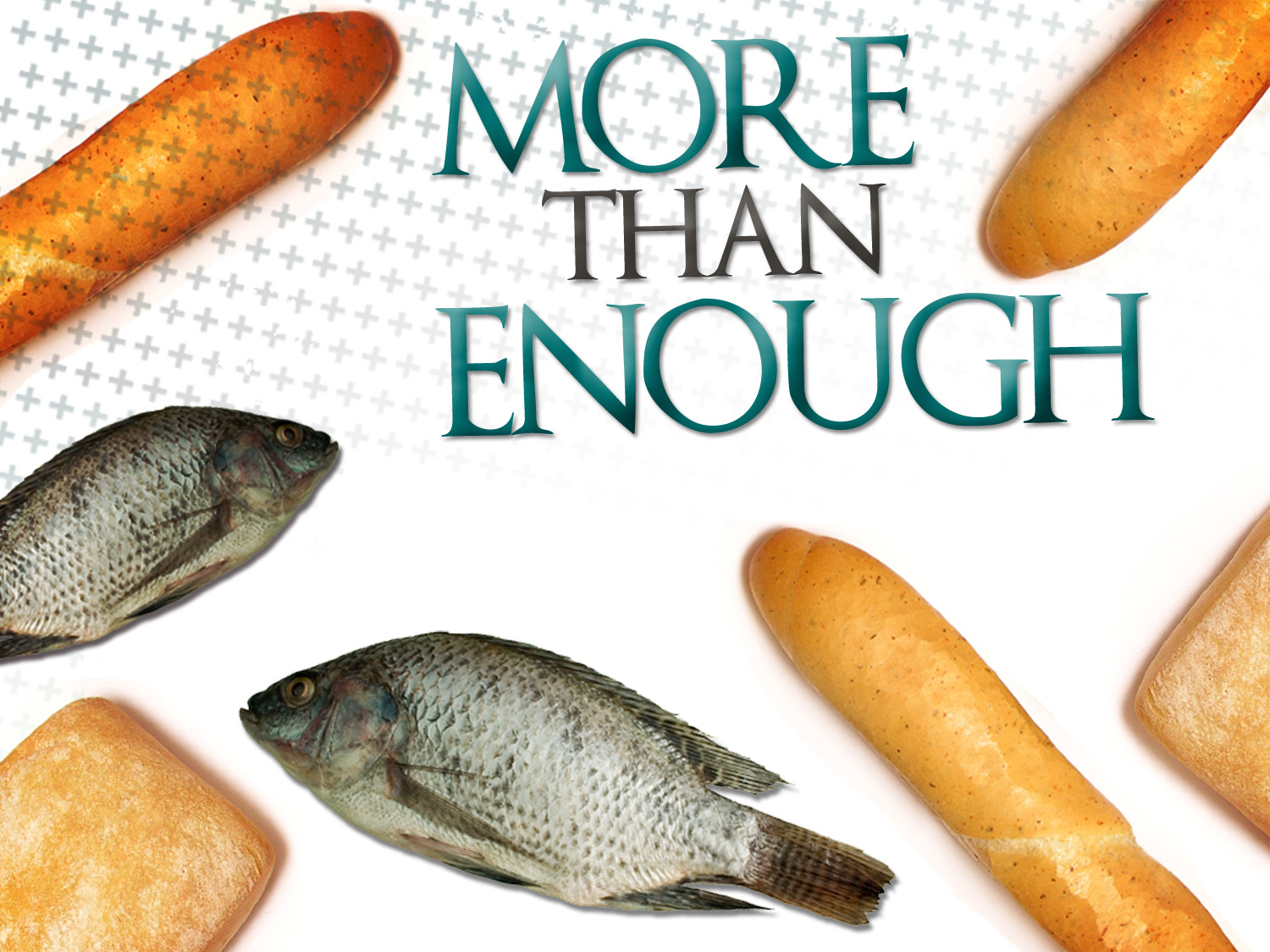 Matthew 14:13-21
So, the feeding of the five thousand. Surely a Sunday School favourite – all those people, a small boy with a packed lunch (although he doesn’t get a mention in Matthew’s gospel), Jesus says grace and five thousand people have enough to eat with twelve baskets left over.

Such a good story, in fact, that in the very next chapter of Matthew, we have almost exactly the same story again – with four thousand people, and only seven baskets of leftovers.

Given the limitations of space, and the similarity of the stories, it’s interesting to wonder why Matthew thought it was important to include them both. For what it’s worth, the most convincing explanation that I’ve heard given is that the two miracles are mirrors of two aspects of Jesus’ ministry: that the feeding of the 5000, with twelve baskets left over, somehow signifies his work amongst the Jews (12, of course, being a very important number in Hebrew tradition), and that the feeding of the 4000, with seven baskets left over, signifies his work amongst the gentiles.

But while that’s nice idea to play with, it’s a bit abstruse, and not obvious what it has to contribute to our life of faith. So let’s stick with the five thousand, for the time being…

Of course one thing about hearing this story as a stand-alone story, as we so often do, is that we take it out of its context. We hear it as – well, as a miracle that Jesus just did one day. If we were to tell the story from memory, many of us might not recall the final words – five thousand “not including women and children” – really? Matthew? Did you miss Jesus’ memo about women and children counting in Jesus’ kingdom?
There’s a sermon in that phrase… but not today.

And I’m guessing that we also wouldn’t remember the first few words.

Now when Jesus heard this, he withdrew from there in a boat to a deserted place by himself

Something has just happened: something that leads Jesus to leave his teaching, leave the disciples, take a boat out by himself and head for a deserted place to be alone.

What happened? Well, it’s not hard to find out. Just read the opening verses of Matthew chapter 14. John the Baptist has been beheaded in prison, his head the original ‘served up on a platter’ as a rather gory gift for Herodias’ daughter. John’s disciples “came and took the body and buried it; then they went and told Jesus.”

And it was when Jesus heard this, this news of his cousin, that he withdrew. And perhaps that’s not surprising. In Matthew’s narrative of Jesus’ life, he and John the Baptist are closely linked. John speaks of Jesus as “the one who is to come after me”, and it is when John was arrested that Jesus’ ministry begins – as if Jesus is consciously and deliberately stepping into John’s shoes – or sandals, or whatever one wears with camel hair clothes. So it’s perhaps no surprise at all that the news of John’s execution gives Jesus reason to pause, to wonder, perhaps, whether he’s being entirely wise, whether, perhaps, those in his family who wanted to bring him home, shut him up, might not have been onto something. The family had lost one young man in the prime of his life – was he to be the next?

So he withdrew. Went off seeking some time alone with God, some clarity, some sense of “what now?”

But, as if to demonstrate that the phenomenon of celebrities being mobbed even when they are desperately seeking to be on their own isn’t an invention of the modern age and the paparazzi, when the crowd heard that Jesus had gone off in the boat, the followed on foot; so that when he landed, there was a great crowd awaiting him.

“And he had compassion for them, and cured their sick”.

Jesus may have retreated because he needed time out to himself, or even because he didn’t know what he was going to do next, but his mind is made up for him by the appearance of the crowd. It’s almost as if the crowd were God’s answer to his uncertainty; in their need he found the answer to his question – “what do I do now?”. His calling, his mission, his reason to be willing to upset those in power, was right there, on the shore: people, in need. In need of healing, in need of teaching, in need of forgiveness – and needing to forgive – in need of the light burden and easy yoke that Jesus had offered in place of the heavy loads of religious conformance born by the Pharisees, and, by the end of the day, in need of food.

I’m guessing that most of us have times when we just want to get away – to withdraw in our boats, find a deserted place by ourselves. And it’s worth noting that when Jesus felt that need, that’s exactly what he did. There are a number of places in the new testament narrative where Jesus retreats, spends time alone with God, often at the key turning points of the story.

But those retreats end, sooner or later, as we are confronted once again with the needs of the world around us: whether that be the practical needs of daily living, the emotional needs of family or friends, the cry for freedom of those oppressed by the injustices of political or economic systems, or the immediate physical needs of those around us; we re-encounter the mission to which God has called us, the mission that was Jesus’ and is now ours – the mission to be God’s people, making real the Kingdom of God in which those who are in need – whatever that need may be – find others who are prepared to help them.

But one thing that is worth always doing when you read a story in the gospel is to try putting yourself into more than one place in the story. We’ve reflected on the story from the perspective of Jesus – what about for the crowd?

The most obvious thing for the crowd – and forgive me if this seems rather a simplistic observation – is that they got fed.

Without question or qualification.

There is a sense in which all of the other stories of Jesus are wrapped in this one. The blind man healed is there in the crowd. The woman caught in adultery is there – and so is her lover, and her husband. The syro-phonecian woman is there, and so is the Pharisee who wouldn’t share a room with her, still less share a meal. The thief who would turn to him on the cross is there – and so is the one who didn’t. The Roman soldier who would crucify him is there. The disciples are there, of course – including Judas, the one who would betray him.

Not literally, perhaps – but the crowd is everyone, represents everyone. And they are all fed, they all break bread together, without worry about who belonged, who was baptised, who believed the right things, who was a member of the movement, who was an outcast, who was a sinner.

And of course this has a message for us, for our attitude to others, for our willingness to reach across the boundaries that we, as humans, so easily erect; barriers of sex or sexuality or gender identity, of language or culture or place of birth; of social or educational status; of age or creed or denomination, of politics or social standing.

They all ate together.

And that leads us to a more basic, more profound message about the crowd: that we can find our place there. That when, sometimes, we feel like no-one special, like someone Jesus’ wouldn’t notice, like someone he – or his friends – would turn away: especially if they knew what we were really like, if they knew the things we’ve hidden all these years, that when we just want to hide in the crowd, we can, and we can still be there, and still be fed. We’re not always up to playing the part of a disciple; never (truly) up to taking the role of Jesus in our act of the play (though perhaps we are called to that more than we choose to hear); sometimes we need to be one of the crowd. Sometimes we are, whether we like it or not. Sometimes we’re even right at the back, hanging around, not sure if we are even part of this thing.

But we are. And the miracle extends to us. The bread of life reaches out and feeds us. We get as good a meal as those in the box seats. All ate and were filled. For there was more than enough.

Twelve baskets more than enough. Enough that having eaten our fill, enough is left over for us to take home and give it to those who weren’t even there.