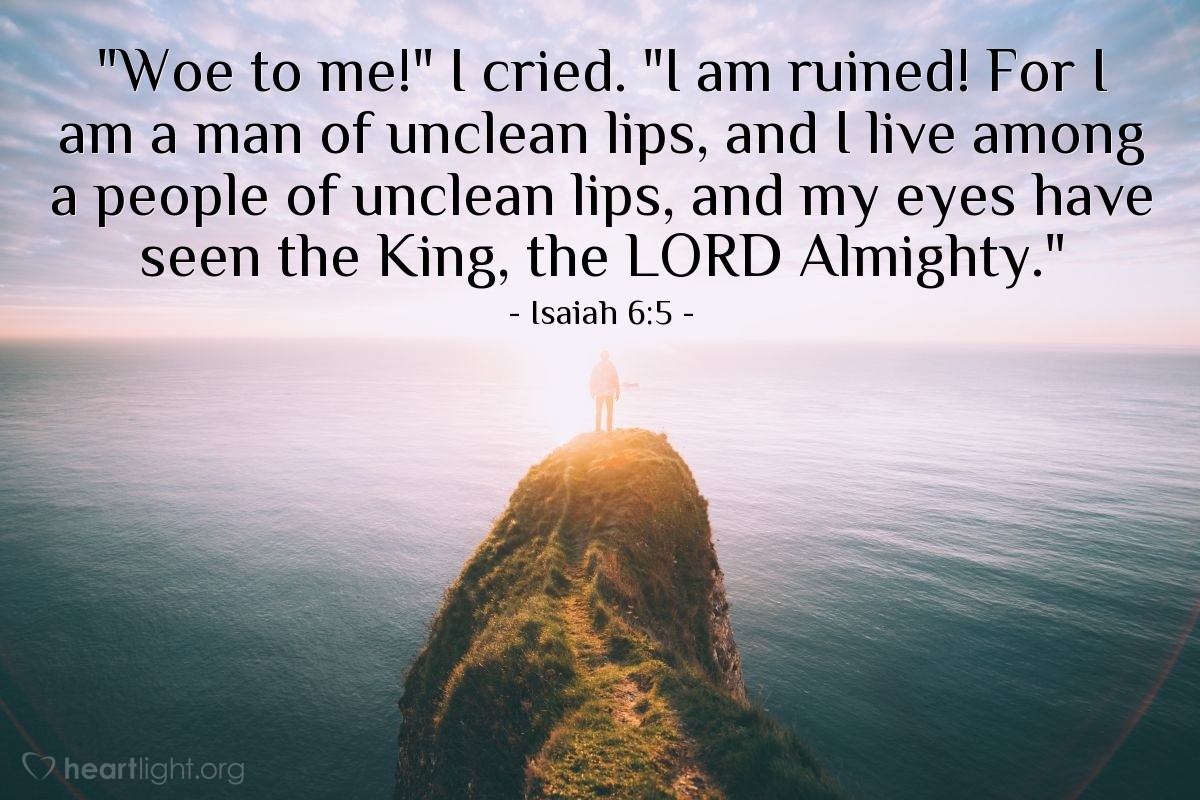 Still, the respect in which Uzziah was held by the people kept the peace as long as he lived.
But this was the year that he died.

It was a time of upheaval, a time of change, a time of uncertainty, of nations divided, of fear.
That was the year that Isaiah saw the Lord.

Keep looking, but not understanding
Keep listening, but making no sense
Their minds are dull, their eyes blind, their ears stopped
For if they looked and listened and understood,
they would turn and be healed.
But they will not do so until the cities lie waste
and the land desolate.

In fear, or uncertainty, or perhaps out of resentment towards a ruling elite who had forgotten them, they would choose to hand power to a despot, despite what they had seen and heard of his past actions.

If you’re seeing parallels between the year that King Uzziah died and some aspects of modern day politics around the world, of Brexit and Trump and the rise of extremism within and outside of the political system, I don’t think you’re imagining them. It’s hard to read Isaiah’s prophecy and not feel at least a twinge of recognition. As the poet Steve Turner put it:

History repeats itself. Has to. No-one listens.

For their leaders, for those who manipulate them to secure their own privilege, wealth and power, yes.
But for the nation, for the people, the words of God spoken through the prophet are words of judgement, yes, and foretellings of tragedy (tragedy that they will bring upon themselves by the disastrous choices they are making), but tinged throughout with sadness, not with anger.

No, Isaiah’s first reaction was this: “I am a man of unclean lips,” – identifying himself with the sinfulness of the people; and only then “and I live amongst a people of unclean lips.”. Isaiah recognises the failings of the nation; but he does not claim himself to be any better. Instead, his first reaction when he has a vision of God is to know his own shortcomings.

In our gospel reading, hundreds of years later, Simon has been listening to Jesus preach, providing him with a boat as his platform, when, in the miracle of the fish he realised who Jesus was. And Simon’s first response is precisely the same as Isaiah’s: “Go from me, Lord, for I am a sinful man”.

It almost seems to be a prerequisite for those who God will choose to call; that they start off by being first and foremost aware of their own shortcomings, not confident in their own power and righteousness. They start by identifying themselves with the imperfections of the world; they begin in a recognition that they are part of the problem; that they, like everyone around them, had not lived according to the way of God; had not loved, listened, worshipped, given, forgiven, loved again.

But God called them, and sent them to be messengers. Because, in the words of Dietrich Bonhoeffer,
God is not ashamed of the lowliness of human beings. God marches right in. He chooses people as his instruments and performs his wonders where one would least expect them. God is near to lowliness; he loves the lost, the neglected, the unseemly, the excluded, the weak and broken.

Simon and Isaiah each knew that they were not worthy to be the instruments of God’s mission in the world. Isaiah feared that he would die in the face of God, so strongly was he aware of his complicity in the sin of the nation; Simon felt instinctively that he was not good enough even to be found in the same boat as Jesus.

On the contrary; those who considered themselves superior, wiser, more important, more godly – the leaders of Isaiah’s day, the Pharisees and Priests of Jesus’ day (or rather – some of the Pharisees and some of the Priests; for amongst both groups were found many who heard Jesus’ words with humility of spirit and desire to learn and grow) – those who thought they belonged in the places of the things of God, the ones who thought that they were better than their community, better than those others – those were the ones God seems most distant from.

But for those who knew themselves to be in need of God; for Isaiah, for Simon, and perhaps, for us, there is instead a pattern. Their sense of their own shortcomings is met by God with forgiveness, with love, with grace; and then they, assured by God of their value, their worth, their importance, not because of anything they have done but simply because God loves them; then, inspired with this confidence, they go.

They go into the world not as people who think themselves superior, but as people who have encountered the life-changing love of God that accepted them as exactly the people they were, and know that that same offer love is held out to all.

Called to follow, though we are part of the problem;
Forgiven, by the love of God,
and Sent in the name and service of that love.