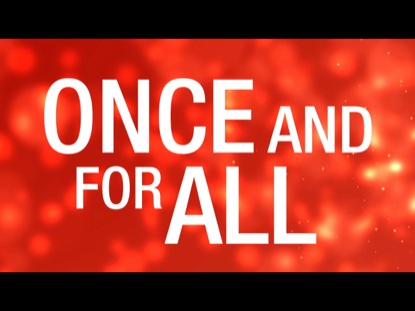 Last week our readings in the letter to the Hebrews moved from a focus on Jesus as high priest to the image of Jesus as sacrifice, and this week, as we read on in Hebrews 9, the author continues on this theme.

One aspect of this transition that I didn’t talk about, but which I think is really important, is the way that the author takes two roles which could hardly be more different in the traditional Temple sacrificial system – that of the High Priest, offering the sacrifice, and that of the animal, being sacrificed – and declares that Jesus simultaneously fulfills both roles.

There’s a really powerful sense in the Hebrew Scriptures, when they speak of the sacrificial system, of the need for both Priest and Sacrifice to be in some sense ‘pure’ or ‘perfect’: the priest is required to make offerings and perform purification rituals before he brings the sacrifice on behalf of the people; and the sacrifice itself has to be of the highest possible quality – a first born, without blemish or fault.

But of course no priest was sinless; and no sacrifice was perfect, until the whole system was completed by Jesus: the one who was faultless as both priest and victim.

Our reflections on Jesus in the role of sacrifice last week focussed on some of the realities that the sacrificial system was intended to point us toward: to the genuine reality and serious nature of sin; to the damaging effect that sin has on other people (not to mention on ourselves); and to the powerful human need to do something to ‘make right’ when our conscience calls us to account.

And the life and ministry of Jesus insists on these same truths: while Jesus always holds out the offer of forgiveness he does not ever deny the reality of sin. He calls out those whose lives of injustice cause harm to others; he calls those who would follow him to repentance; he tells the sinful “Go and sin no more”.

But ultimately, Jesus redirects our response: away from empty rituals, away for sacrificial offerings, and to the life of discipleship, the life as a citizen of the realm of God.

In today’s reading the author turns to another aspect of the sacrificial system, one which might not have occurred to us, unaccustomed as we are to the rituals and routines of the Temple.

But for the first century Jewish follower of Jesus, naming Jesus as both priest and victim in the sacrificial system left a question hanging.

What about next year?

If the death of Jesus has dealt with sin in the way that the sacrifice of goat or lamb dealt with sin, then what about sins committed since he died?

For the sacrifices of the priesthood were fundamentally retrospective. They were to deal with the past sins of the people; to wipe the slate clean, to give a fresh start.

But they therefore had to be offered again and again, year after year. Because one thing we know about humanity is that our clean slates don’t stay clean.

If Jesus was just replacing the sacrifice offered by the priest each year, what about all the ways that we have fallen short since he died?

So in this reading the emphasis isn’t on how the death of Jesus was like the old sacrificial system, but it focusses instead on how it is different.

And in particular, that Jesus work on the cross was once and for all.

And so here again we get this sense that the logic of the author isn’t so much to show how Jesus satisfies the demands of the sacrificial system, as to show how Jesus replaces it, while retaining the fundamental truths that the Temple sacrifices described. How Jesus offers a future faith that builds on the ancient wisdom of the Hebrew religion without depending on its forms.

And I think you’d have to acknowledge that the author’s argument for why it is that Jesus’ sacrifice could be just once and for all isn’t exactly crystal clear.

There is no step by step explanation of the logic by which a repeated annual act could be replaced by a one off.

And I think that that echoes in many ways something I wanted to express last week: that while the Bible speaks often of Jesus death as being ‘for us’, or ‘in our place’, the mechanism by which that substitution works is not ever described – and our attempts to make sense of it tend to lead us to strange and difficult places.

But the picture painted is, at least to my eyes, more satisfying than an attempt to make logical sense of something that is clearly beyond the scope of human language and comprehension.

For the picture painted is of a sacrifice that is both more complete than what has gone before, and at the same time, is somehow timeless, eternal.

When I say that the sacrifice that Jesus offers is more complete, the author offers us two images of how that is the case.

Firstly; that the sanctuary Jesus entered to make his offering was the real thing, not the imitation made by human hands.

This plays a bit on the architecture of the Temple. You might know that at the heart of the Temple lay an enclosure known as the “Holy of Holies”, which was where the arc of the covenant was kept, a place into which only the High Priest would go, and only once a year. While the Hebrew people didn’t really believe that God ‘lived’ in any human place, the Holy of Holies represented to them the dwelling place of God. It was divided from the inner sanctum, the “Holy Place” by a giant curtain: the curtain torn apart in the narrative of Jesus’ death as recorded by both Matthew and Luke.

And then there was the offering. Where the priest again could only take a symbol, an image; the blood of an animal offered, Jesus took himself. The priest had only an animal that was perfect as far as human inspection could tell; Jesus took perfection itself.

I think it was J.B. Lightfoot, the 19th century theologian, who said that all previous covenants had failed because they were agreements between God and humanity – “you be my people, I will be your God” – and humanity always, inevitably, failed to hold to their side.

But when Jesus took on the form of humanity and then entered into a covenant with God on our behalf, that covenant was different; for it was between God and God.

And because this covenant was sealed between God and God, and sealed in the true sanctuary, the presence of God, it has another crucial difference from all that had gone before.

The sacrificial gift of Jesus is eternal. Not in the trivial sense of going on for ever, but in the true sense of being beyond even the concept of time.

The author hints at this; that Jesus would, according to the old rules, have to suffer ‘again and again, since the foundation of the world’. But instead he appears “once and for all at the end of the age” – or perhaps better, “at the end of time” – again, not in the sense of the endpoint of time, but in the sense of beyond time.

Jesus’ work is eternal; his sacrifice stands outside of time, for it stands in the presence of God.

I think that’s the sort of image we try to capture when we sing of “rich wounds yet visible above”; the sense that the death of Jesus was not simply an event in time and space, but an event in eternity.

And finally, the author paints another image for us, another parallel drawing on the humanity of Jesus. For each one of us, he or she declares, will live once, and then die and face judgement; and in the same way Jesus lived once, and died; but his judgement is to declare forgiveness.

And so we can build on last week’s reading and add another clause:

Sin is a real thing, a real problem

Jesus has dealt with sin; once and for all

Everything the Temple system painted an image of, sounded an echo of; Jesus is the reality.

Next week, in our final dip into the book of Hebrews the author will bring this argument to its glorious conclusion:

For by a single offering he has perfected for all time those who are sanctified.

Where there is forgiveness of these, there is no longer any offering for sin.

But that’s next week