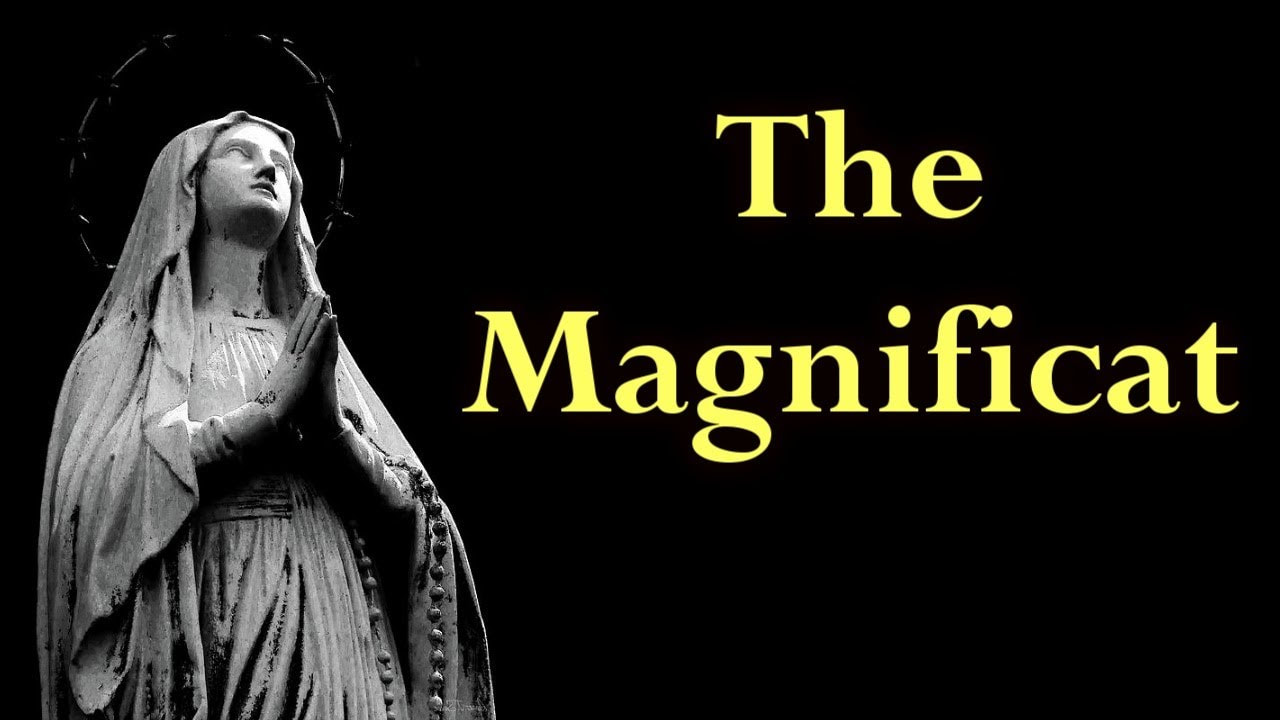 Mary’s was not the only miraculous pregnancy in the Christmas story.

Mary’s cousin Elizabeth and her husband Zechariah were much older than Mary – old enough that Elizabeth’s pregnancy was itself considered a miracle. It was to this older couple that Mary ‘went with haste’ soon after she received the visit of the angel Gabriel, and they provided a place of refuge for their unmarried, pregnant relative, away from the sneers and disapproving looks of those who knew her. Perhaps Joseph and Mary’s parents arranged for her to spend some time in the country ‘for her health’ – perhaps there was even some thought that Elizabeth might raise her own child and Mary’s as twins, allowing Mary and Joseph to marry without shame.

But if that was the plan, it is not the way things worked out. For during her three months in the hill country with Zechariah and Elizabeth, something remarkable happens to Mary.

Of course, we’ve already gathered that Mary was a fairly remarkable young woman. When an angel came to her and spoke words of greatness, of the kingdom of David, of unending rule, she questioned him (questioned an angel, just think about that – so much for the image of the meek woman) and then gave her consent  – even though it was not asked for, she understood she too had agency here – “I am the servant of the Lord, let it be as you have said”.

But here, in the Magnificat, Mary shows that far from being a humble, faithful, submissive servant of God – from being a stereotypical woman of faith – she has a lot more in her of the prophet.

In the Magnificat the gentle, respectable Mary who accepts her lot takes it, to coin a phrase, up to eleven.

Maybe Mary is a bit less “let it be to me according to your word” and a bit more “OK, God, let’s do this thing”.

When Jesus came to public prominence, some thirty years later, these same themes would be running through his preaching. Many who are first shall be last and the last first. Unless you enter the kingdom of God like a child you will never enter it. It is easier for a camel to pass through the eye of a needle than for a rich man to enter the kingdom of heaven. Blessed are the poor. Prostitutes and sinners will come in and sit down at the table before those who are respectable and powerful.

Over the centuries lots has been made of Mary – she’s been declared the eternal virgin, to have been without sin herself at the time of Jesus’ conception, to have been assumed bodily into heaven, to be with God now hearing our prayers. I don’t get any of that. But for me, Mary did something even more remarkable and praiseworthy of all these things.

She taught Jesus. She brought him up.

And if we are to take seriously the humanity of Jesus, then we have to say that as he grew as a child one of the most powerful forces shaping his character, his way of thinking, even his way of speaking, would have been his mother.

Of course, there were others – the synagogue, Joseph, the family, the village. Not to mention that deep spiritual instinct inate in every child. But she was the one there, always, especially in those early formative years.

Some might object that God probably had an influence in the way that Jesus grew. Of course. Of course, that’s so. But isn’t it the case that again and again in the Biblical narrative the way God works in the world is by choosing the right person or people, and pushing them into the right direction? Abraham, or Joseph, or Moses, or David, or Nehemiah? Or Peter and Paul? Or Luther, Wilberforce, Wesley, Ghandi, Mandela?

Surely when God chose Mary there was a reason. That she was more than just a good girl. That God knew she had what it took to raise a child to the man who would change the world.

And so read again today the glorious and powerful words of the Magnificat. And it seems to me that we need to read these words twice. For the words Mary spoke have two very different meanings for two different audiences.

The fact that you are here today places you into a small minority. That you profess a faith, and profess it with sufficient conviction to take time week by week, on Sundays and in the rest of the week, to meet with other believers, to pray, to learn, to worship, put you very much in the minority in the modern western world. And not, for the most part, a very highly thought of minority. You wouldn’t have failed to notice that the background assumption of the modern world is that to hold to a religious faith is evidence of feeblemindedness, superstition, or simple unwillingness to face reality. To be a person of faith – of any faith – is not, generally speaking, a widely respected choice.

And when we feel like that, when we feel that the things that we value are mocked – or worse, perhaps, ignored – when faith itself is regarded as an eccentricity at best, we hear Mary’s words: God’s mercy is to those who fear him from generation to generation… he has helped his people in remembrance of his mercy, according to his promise. We hear that God is still there; that God still stands besides those who choose to stand beside God; that in God mercy God helps those who are God’s people. Even – or perhaps especially – when they are not in charge, not powerful, not influential.

Hear Mary’s words speak over the arrogance of those who would declare that God is a delusion, that they know better: God has scattered the proud in the thoughts of their hearts.

But as we gather, we also need to hear Mary’s words to a different audience. For when she speaks of the powerful being brought down and the lowly lifted up, the poor fed and the rich sent away hungry, we need to acknowledge that we – as a nation, as a community, and, for the most part, as individuals, fall much more into the basket of ‘rich and powerful’ than that of ‘poor and lowly’. While we may not be the 1%, the super-rich, in global terms we are a lot closer to that end of the spectrum than the other.

Now the Bible definitely has two strands of teaching about wealth and power. On the one hand, it’s a gift, a blessing from God, a blessing given, as all God’s blessings are, in order that we might bless others. But on the other hand, we have passages like the Magnificat, speaking of the throwing down of the powerful, the sending away hungry of the rich.

Passages that are talking less about the fate of individuals, and more about fundamental structural change.

Talking about a revolution.

But not – for this is the revolution of Jesus we’re talking about – a revolution of violence. God raises up the poor and brings down the powerful mostly when poor and powerful alike, inspired by the words of the prophets and the example and teaching of Jesus and the power of the Holy Spirit, make it happen.

This is the revolution that happens when we hear the words of the prophets calling on us to share the blessings God has given us, and open our hands, our hearts, our homes, our communities, in generous hospitality.

And it’s the revolution that happens when we look deeper into those same words and see that the world needs more than generosity; that it needs justice; when we take a stand not just to give a hand up to those in need, but to change the structures of our society that keep the poor, poor – the ordering of society that protects wealth and privilege, that ensures that the greatest single predictor of someone’s wealth is who their parents were.

It’s the revolution that sees Jesus’ radical inclusion of those who were marginalised – women, slaves, foreigners, sinners – and seeks to overthrow any law or custom which would discriminate against others on the basis of ability, race, sexuality, gender identity, age or faith.

This is the revolution of Christmas, the great miracle that sees the breaking down of the ultimate barrier, that which stood between God and humanity, and ushers in the kingdom of God, in which ultimately all barriers will be transcended, which we are called upon to make reality, God’s will on earth as it is in heaven.

Let’s do this thing.