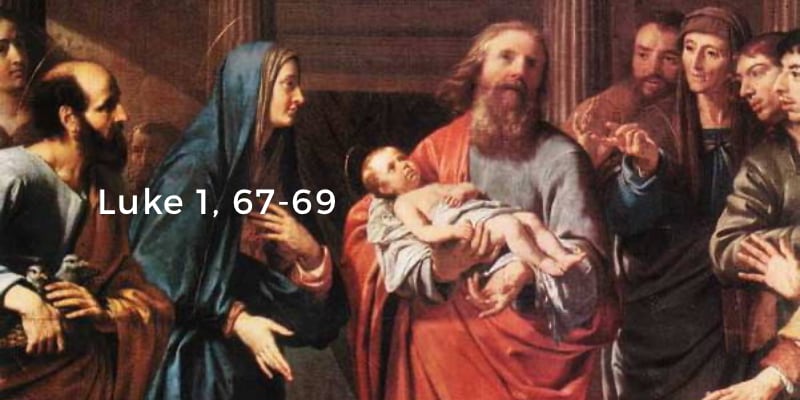 Zechariah’s story is one that we tend to skip over most years in advent. There’s so much happening, and only a few Sundays to fit it into – and with carol services and advent pageants and all, the story gets squeezed down. We’ll hear Mary’s incredible Magnificat, and the stories of the visits of the angels, and the journey to Bethlehem; we might reflect on the ministry of John the Baptist at the start of advent; but Zechariah tends to get left out.

But the author of Luke’s gospel gives Zechariah a place of significance in the opening chapter of his or her work, and so maybe we ought to wonder why.

Of course, part of the reason is surely that for the author, John the Baptist was himself an incredibly important figure. Luke’s gospel doesn’t start with Jesus, it starts with John; and after the birth and childhood accounts are complete, it is to John’s teaching that the gospel turns, and to the baptism of Jesus by John.

And so John’s parentage – and his miraculous birth – foretold by angels, of a woman too old to have children (echoes, surely, of Abraham and Sarah) – is clearly important.

We don’t, of course, know a lot about him. He, and his wife Elizabeth (Mary’s cousin) were of the priestly line, descendants of Aaron, and “were righteous before God, living blamelessly according to all the commandments and regulations of the Lord” (v. 6). They were good Jewish people; faithful in the worship and service of God. Zechariah served as a priest in the Temple of God; even, when the lot fell upon him, entering into the sanctuary to burn incense on the altar.

Zechariah, in other words, was everything that a good, faithful Jewish man should be. And now, in his old age, as it would have been understood by the people of his day, he and Elizabeth had finally been rewarded by God, in the birth of a son.

And he was a priest. Given how much criticism the religious leadership of Jesus’ time come under in the gospels, it’s maybe worth lingering for a moment on that point. The words that we have heard today come from a priest. A member of the religious establishment. A man deeply embedded in, formed by, the wisdom of the Hebrew tradition.

The words we have heard today are not spoken by an outsider, not spoken by a disenfranchised rebel, but by a member of the establishment. As John the Baptist, himself, would have been, if his life calling hadn’t taken a different turn.

It’s important, because we have this tendency to see the message of John, and then the message of Jesus, as if they were something new, something completely radical and different from all that had gone before, and by doing so, missing the wisdom and revelation of God in the tradition from which they emerged.

For in truth, there is nothing in the message of Zechariah – or in the Magnificat, or in the preaching of John the Baptist – that wouldn’t fit perfectly in the mouth of one of the prophets of the Hebrew scriptures.

In fact, the most unusual thing about Zechariah’s words, in the context of the prophets, is just how positive what he has to say is.

There is none of challenge that is often found in the prophets, none of the condemnation of those who have turned away from the way of God, none of the call to repentance that characterised the preaching of John, his son.

Instead, his words are a shout of exultation, a celebration of victory, a declaration of the salvation of God, spoken as if it had all already happened.

God, Zechariah declares, has looked favourably on God’s people. Has redeemed them. Has raised up a saviour. Has shown mercy. Has remembered the promise made to Abraham.

John is just a baby; Jesus is not yet born, but Zechariah speaks as if the work was already done, the salvation of God was already complete.

But then he switches tense, and speaks, as it were, to his son.

“And you, child, will be called the prophet of the Most High”

“You will go before the Lord to give knowledge of salvation… to give light to those who sit in darkness… to guide our feet into the way of peace”.

Don’t you just love that shift? That paradoxical timing?

God has already done this.

And you are going to go ahead.

It’s actually a pattern, again, familiar in the Hebrew prophets – indeed, embedded in the Hebrew language. That when speaking of the actions of God – even when those actions are, in our way of thinking and speaking, yet to come – they are declared as complete. Done.

It’s theology expressed in grammar. If it is something that God is going to do, then it is done. Settled. Even if it hasn’t happened yet, it can be spoken of as finished.

The nearest I can think of in English is when we give the assurance “consider it done”. But in the prophetic voice, when God gives that same assurance, its weight is infinite. It is done.

But that ‘done-ness’ doesn’t eliminate the call that Zechariah declares has been placed on John. Indeed, the latter flows from the former. God has done this thing; God has saved God’s people – and you will be God’s prophet, you will declare it.

And I think this takes us back to the paradox of hope; to what theologians like to call semi-realised eschatology – the now-but-not-yet nature of our salvation, of the reign of God, of the making new of all things.

That our hope arises from God’s declaration that “it is done”. That as we look around the world and see so much that so clearly is not “God’s will being done on earth as it is in heaven” – as we see the powerful abuse their position, the marginalised discarded, the outsider excluded – when we reflect on indigenous incarceration rates, on lives destroyed by gambling, on domestic violence and sexual abuse, on massive inequality in health care and education, on the vilification of those who express their sexuality or gender identity, on prejudice against those living with disability, against the neuro-atypical, when we see creation treated as disposable – when we see all of that, we still hold on to hope – because God has said “consider it done”

And, at the same time, we hear the second half of the reading – we hear God’s call on us to “make it so”.

His declaration that God has not forgotten us. That God’s promise is fulfilled. That there is salvation and mercy and justice and peace.

And his declaration that, you, child of God, you are one of the voices that will declare it, one of the pairs of hands that will make it happen. You’re not John the Baptist – but the promise of the gospel, of Pentecost, is that the Spirit of God will not just be on this one strange locust eating prophet, but on all God’s people.

That when you see all those broken shards where the world is not as it should be, you will speak up, and you will take action – because God has said “consider it done”.

That the young will see visions and the old will dream dreams.

And everyone who calls on the name of the Lord will be saved.