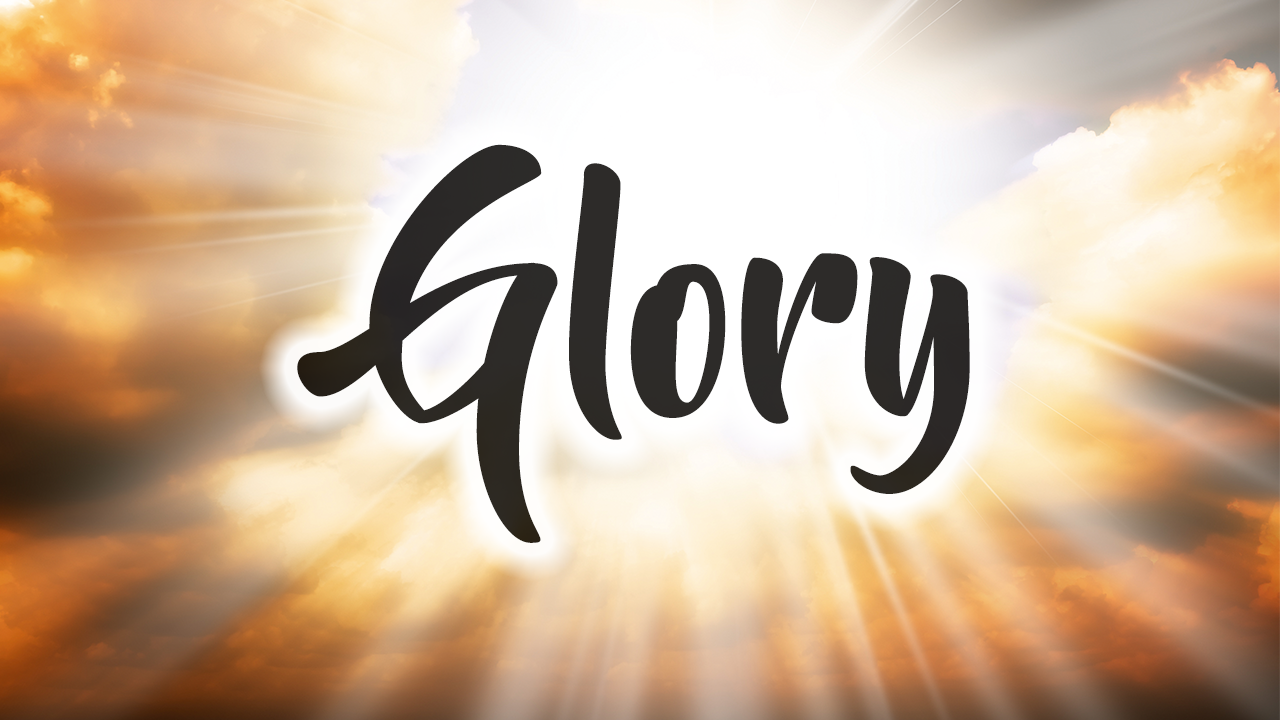 After Jesus had spoken these words, he looked up to heaven and said, “Father, the hour has come; glorify your Son so that the Son may glorify you”

It’s one of those words, isn’t it. We all have a pretty clear sense of what it means, the vibe of the thing, but it’s hard to pin down. Especially when it comes to the glory of God.

The Hebrew people, the Jews of Jesus’ day – all those who first heard these words that Jesus spoke – had a very strong sense of the Glory of God. The Hebrew word for glory, kabod, is used of God over a hundred times in the Jewish scriptures, our Old Testament. It’s used of what God is – the God of Glory, and of what God does.

But perhaps most importantly, kabod is used to describe the visible, or tangible, presence of God. At key moments in the Old Testament narrative the glory of God becomes visible: at Mount Sinai, when Moses is about to receive the law, we read “The glory of the LORD settled on Mount Sinai, and the cloud covered it for six days; on the seventh day he called to Moses out of the cloud. Now the appearance of the glory of the LORD was like a devouring fire on the top of the mountain in the sight of the people of Israel”. And when the tabernacle, the predecessor to the Temple, was completed as a place of worship, God declared God’s presence by a visible sign of God’s glory: “Then the cloud covered the tent of meeting, and the glory of the LORD filled the tabernacle”.

By contrast, in the story of 1 Samuel, when the people of God (and especially the religious leadership) have turned away from God, treating the priesthood as just a way for the rich to oppress the poor, we read instead ikadob – the glory has departed (or perhaps a better translation would be ‘woe for the glory’.

So there is this pervasive sense of glory as the tangible, visible, experienceable, presence of God.

Because though we know that God is present at all times and in all places, it is the experience of people of faith throughout the ages – and indeed, of many people with no or uncertain faith – that at some times and in some places God’s presence simply seems more real, more immediate.

The Celtic Christian tradition speaks of some places as being ‘thin’ – as if to say that in those places the wall dividing earth from heaven has been rubbed thin by generations of faith, and the presence of the divine feels close – the glory of God is more real.

So in our gospel reading, the word glory comes us quite a few times, you might have noticed. I’d like us to reflect on three of the places it’s used, in verses 1, 4 and 10.

In verse 1, Jesus prays: Glorify me so that I might glorify you.

Words which on the surface have a slightly uncomfortable arrogant overtone – I want you to bring me glory, Jesus says to God.

But if we hear them through the lens of that Old Testament sense of the word ‘glory’ they take a different flavour.

And that puts the whole of the reading into context. This isn’t about glory in the sense of getting praised, being proven right: this is all about the glory of God: making God’s presence tangible, visible, to the world.

That was true throughout Jesus life, of course. But here he speaks as if it was about to be made true. Or perhaps, made true. ‘The hour has come; glorify your son”. The context, of course, of these words is the farewell discourse; the teaching of Jesus that John records for us on that last evening, before he is taken from them to be crucified.

The hour has come. Glorify your son so that I might glorify you.

Jesus is about to be betrayed to his death, but his prayer is that he will be glorified. That in him, the character and presence of God will be made known.

For as Jesus willingly goes to his death, accepting the consequences of human greed and selfishness and fear and violence in order to offer us a way back into reconciliation with God and one another; as he goes to the cross, and through it to the resurrection, the ultimate proof of the triumph of love over hate; as he does this he is making the character of God known in a way that nothing else ever did or ever will. The God who suffers alongside God’s people; the God whose love will never give up on us.

The glory of Jesus – the sacrificial love of God made known.

Jesus goes on in verse 4 to say “I glorified you on earth” – how? – “by finishing the work that you gave me to do”. The cross, while the most complete and dramatic revelation of God’s love, is just the conclusion of a whole life spent in demonstration of that same love. In the immortal words of Sting – ‘this final act was meant to provide a lifetime’s argument’. God has been glorified, Jesus says, God has been made known, made close, made tangible, by the things that Jesus has done. By the work he has completed. By his healing, his teaching, his befriending, his including, his correcting, his loving.

Let you light so shine before others, Jesus said himself, that they may see your good works and, what?, give glory to your father. In the shining of his light, all people saw the works of Jesus, and in them saw the reality of God, the glory of the father.

But not just in his works; for he gave that command to us. And in the conclusion of our gospel reading today he declares that truth: I have been glorified in them.

Jesus says that he has been glorified in his friends. In his followers. In his disciples. In us.

Now that’s a saying both hard and encouraging to hear.

Hard because – well, people will look at us and draw conclusions about the nature of God. I mean, thanks, Jesus, no pressure there or anything.

But encouraging too; because over the generations, though there have been plenty of terrible failures, the love of God has been shown over and again by faithful disciples of Jesus Christ giving themselves in service of God, of their neighbour, of the world.

And encouraging too because we know somehow that if Jesus says that he is glorified in his, he will make it so. He will enable us to be his glory, God’s presence made known.

We are the thin places of the world.