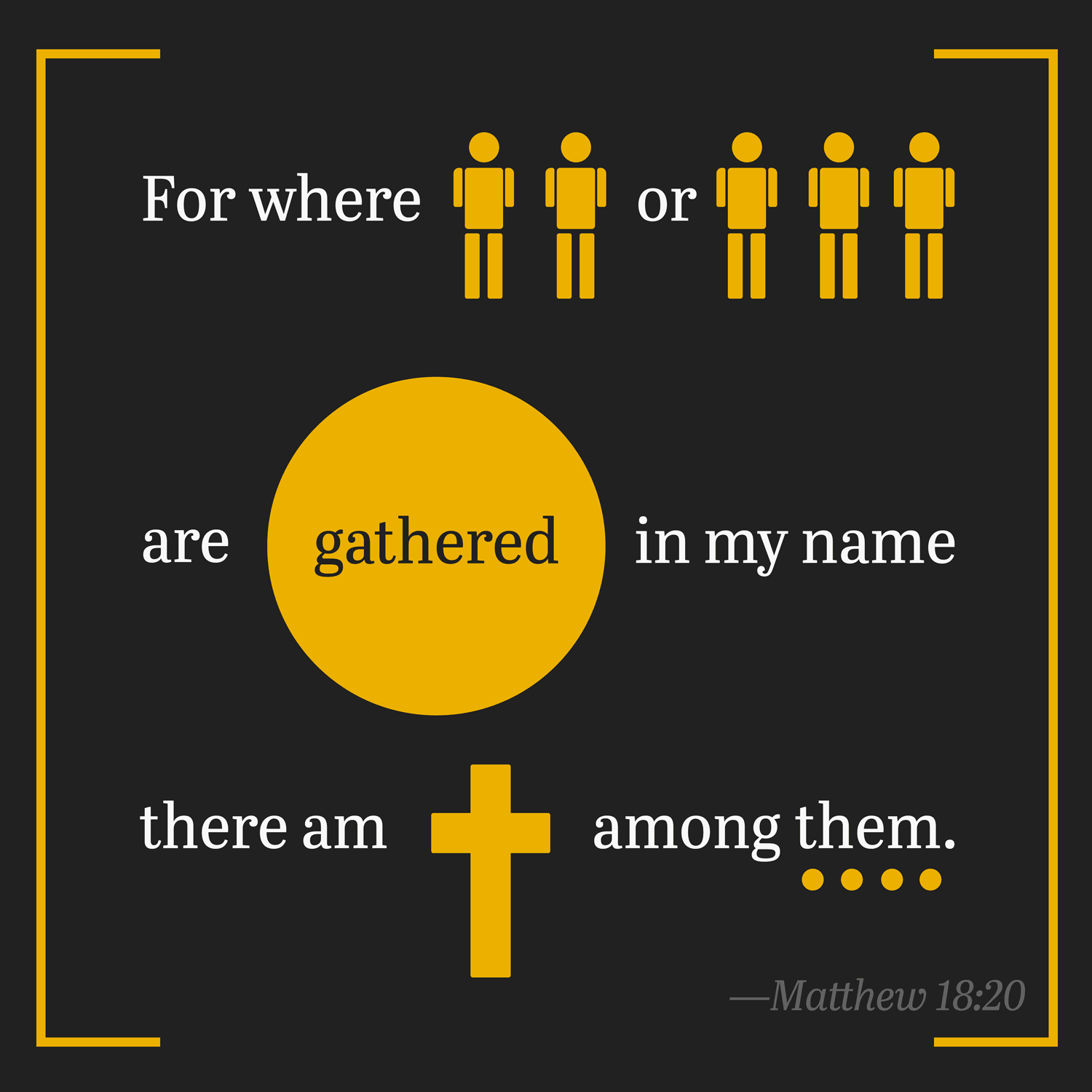 Matthew 18:15-20
Now here’s a phrase that we certainly hear and use in the community of Christian faith:

Where two or three are gathered in my name, I am there among them.

We claim this as a promise, we value it for Jesus’ commitment to us, to being with us, to standing alongside us as we gather to worship.

But I wonder what it really means for us?

When two or three are gathered in my name, I am there among them.

We often say that Church isn’t primarily about Sunday worship; that being the Church of God isn’t so much about what we do when we gather for an hour on Sunday as it is about how we live for the other 167 hours of the week.

The logic seems to go like this: our faith isn’t so much about what we do on Sunday morning as it is about how we live the rest of our lives (which is true); Sunday worship is about learning and refreshing ourselves so that we can live the rest of our week in ways that are honouring to God. The Church worship meeting isn’t the point; it isn’t the race, we tell ourselves, it is the pit-stop, recharging ourselves for the reality of living out our faith.

All of which is all very well, except for the way that it places the burden, the emphasis, the sense of the Christian lives, on ourselves, on the actions and values and decisions that we take, in our isolation during the six and a half days of the week that we are not at Church.

Which is, of course, accepting a false dilemma; as if we have to choose between a faith which only operates for a couple of hours each week in this place, and a faith that is expressed when we are on our own in the wider, faithless, secular society around us.

But Jesus’ words offer another path, a road between the ritualistic religion which places all the emphasis on the actions of the community in formal worship, and an individualistic spirituality which cares nothing for what the rest of the world is doing as long as it can express its own sense of faith unimpeded.

It’s a path that builds upon the third of my words from a couple of weeks ago: the interplay of unity and individuality that we call mutuality; our recognition that we are, as the text that week said, individually members one of each other.

Because one of the interesting, and generally unspoken, implications of this text: where two or three are gathered in my name I am there with them is that there is a sense in which a negative is also implied: that when we are not gathered, Christ is, in some sense, less present.

Not to say, of course, that Christ is not with us when we are alone, but to say that there is some sense in which his presence is enhanced, made more real, more tangible, when believers gather together.

We make Jesus’ presence real to one another.

Even if it’s just at the basic level of keeping one another honest. Sureka and I just started one of these exercise programs where three days a week we get up way too early in the morning and deliberately cause ourselves to suffer in the name of ‘exercise’. And like many people who try to do some sort of fitness regime, we have found it all but essential to have a buddy: I know without the slightest shadow of a doubt that if it were just left to me, when the alarm went off in the morning and I was faced with the choice of getting up to exercise or rolling over for another hour of sleep, sleep would win every time.

But when two are gathered together, we remind each other of the promise. It’s not me making her get up or her making me get up (ok, admittedly there’s something of the latter in it), but just something about the synergy. As if to say that when the two of us are both there, our agreement is more real.

God is always present with us. How could it be otherwise? There is nowhere in all of creation that God is not; there is nothing in all of creation that can separate us from God. So when Jesus says “when two or three are gathered in my name, I am there with them” it’s not that there is something different about Jesus – he is always, always, there – the difference is with us. When two or three are gathered in his name, we make Jesus’ presence real to one another.

And of course we can be aware of Jesus’ presence with us when we are alone – just as it is, at least in theory, possible for me to get up early and do a set of high impact exercises on my own – but most of us find it a lot easier when there are others around us to remind us, to be a tangible, visual, relational representation of the body of Christ.

So the promise of Christ’s presence is made for when we gather in his name. When we gather intentionally focussed on the name of Jesus; on his character, his mission, his will, we make one another aware – we remind one another of what we all know; that he is here with us.

Which, as we come to the end of this short series on The Body, I want to take this opportunity to really encourage everyone in the Roseville Uniting Church community to get involved in some form of intentional faithful meeting with other Christians on a regular basis.

Not just getting together for a coffee – incredibly important though that sort of connection is – but getting together in small groups to be deliberately aware of God’s presence with us; to listen to one another’s joys and sorrows (so that we can, as we reflected last week, rejoice with those who rejoice and weep with those who weep) deliberately conscious of Christ’s presence with us; to study the scriptures together, aware that by the Spirit Christ is there leading us into all truth; to pray together, knowing that Jesus is also interceding for us.
For though some believers find they are able to, in the words of Brother Lawrence, practice the presence of God in all the private moments of life, most of us find that we need one another more than that.

And one of the ways that, throughout the history of the Church, believers have found most effective in growing their faith and their knowledge of the presence of God has been meeting together in small groups; to share, to learn, to pray.

But if you don’t have that as a regular part of your life, I’d like to really encourage you to make it a priority to get involved. Now I know there are lots of practical difficulties; times, places, transport, health; but in general we find ways to make things possible when we make them a priority. So after the next hymn we’ll be handing out cards and pens, on which you can indicate that you are part of a small group already, or you can opt out and just say this isn’t for you, or you can say (and if you’re not already part of a group I’d really encourage you to tick this box) that you are willing to at least explore the possibility of finding a small group that might work for you.

Over the coming weeks either I or one of the elders will talk with everyone who expresses an interest in this way, to try to find out exactly what the constraints of time or place or style or content might be, with the aim of finding a place in existing – or new – groups for everyone who would like to be part of one.

Because if one hour a week, gathered with two or three (or more!) – here on Sunday – enables you to grow in faith, how much more might you grow with more time, two or three gathered together, making one another aware of the presence of God?