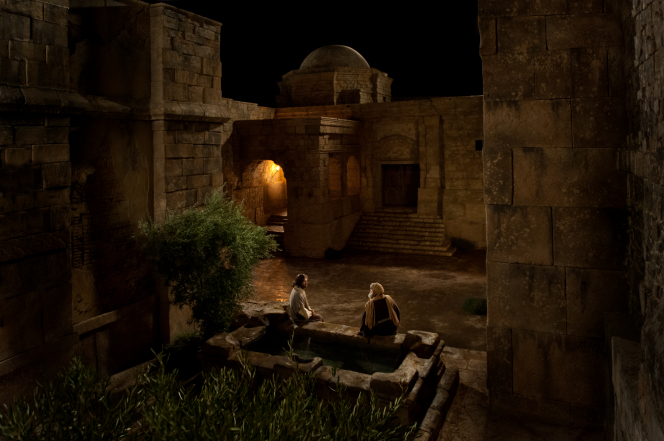 A couple of favourite passages come together, today. Our New testament reading from John, containing as it does the most cited verse in the Bible – John 3:16 – a favourite, especially, it seems, of people who hold up banners at American sporting events.

And Genesis 12 – much less famous, but a huge favourite of mine, a passage that I quote, or at least make reference to, perhaps more often than any other text, certainly in the top few. Containing, as it does, one of the core pieces of my understanding of the Christian – and Jewish – faith; that we are called by God, made God’s people, blessed, primarilly not for our own benefit, but for the blessing of the world: I will bless you so that you will be a blessing.

So I struggled this week, wanting to find something fresh in these scriptures for me – because really the alternative is to find the sermon I preached three or six years ago, when these texts last came up in the lectionary, reword it a little, and hope no-one notices. I do that from time to time, you know…

And what got me going in the end was a few words in the Old Testament reading that I think I tend to skip over in my reading and my memory: “those who curse you I will curse”.

I don’t want those words to be in the story.

I want it to be about God’s blessing, given to a man, a family, a people, a movement, in order that the world might be blessed.

And once you start reading with that in your mind, the theme seems to reoccur. Even in the wonderful encouraging verses of John’s gospel.

For in John’s telling, Jesus foreshadows his own crucifiction with these words: “just as Moses lifted up the serpent in the wilderness, so must the Son of Man be lifted up, that whoever believes in him may have eternal life”.

A quick recap of the story that Jesus is alluding to: the people of God are in the desert, wandering, fighting skirmishes with the occupants of the land of Cana. And at one point they complain against Moses and, the writer tells us, against God, that there is no water, and miserable food. The story goes on: “Then the Lord sent poisonous serpents among the people, and they bit the people, so that many Israelites died. The people came to Moses and said, ‘We have sinned by speaking against the Lord and against you; pray to the Lord to take away the serpents from us.’ So Moses prayed for the people. And the Lord said to Moses, ‘Make a poisonous serpent, and set it on a pole; and everyone who is bitten shall look at it and live.’ So Moses made a serpent of bronze, and put it upon a pole; and whenever a serpent bit someone, that person would look at the serpent of bronze and live”

And when we hear this story, in the context of John’s gospel, we are quick enough to identify it with the crucifiction. And sure enough, it’s about that. About Jesus being ‘lifted up’ for us – indeed, he was lifted up three times; once in the crucifixion, again in the resurrection, and a third time in the ascension.

But the thing about this story, of the snake being lifted up as a cure, is that the snake was also the problem. The snake, before it was the cure that would save the people, was the judgement from which the people needed to be saved.

Is this a pattern Jesus follows? Is this what Jesus is wanting us to think, wanting us to recognise? Just as I prefer to glide over the mention of curses in the Genesis passage, so we in the Church – or at least, in our sort of Church – tend to slip quitely past references to Jesus as the judge; but the fact that we don’t talk about them doesn’t make them go away. Even in our gospel reading today, “God did not send the Son into the world to condemn the world, but in order that the world might be saved” only makes sense if it is first understood that the Son being sent to condemn the world would be a perfectly reasonable act. That the Son, is, that Jesus is, legitimately, the judge of the world.

And then Jesus’ words take a different feeling: God did not send me to condemn, but to save. And notice that he does not say “God did not send me to judge, but to save”. He says “not to condemn, but to save”. For in the very next few verses, the second half of the conversation in John 3, Jesus makes it clear that his coming into the world is very much an act of judgement: “And this is the judgement,” he says, “that the light has come into the world, and people loved darkness rather than light”.

Jesus did not come to condemn, but he did come to judge.

For judgement is not the opposite of salvation; judgement is the first step in salvation, a necessary part of the reality of salvation. For if we do not have judgement – a correct, moral assessment of right and wrong, for that is what judgement it, the declaration of the truth; whether it is a judgement we make of ourselves or a judgement passed on us by another – if we do not have the clarity, the light, of right judgement, then we cannot begin to make right. We cannot meaningfully apologise if we do not accept or understand that we have done something wrong; we cannot begin to repent, to change, if we have not seen the need for change; we cannot be saved from what is broken within us while we continue to claim to be whole.

John Newton captured this idea in words from his wonderful hymn Amazing Grace; words that so much used to trouble me: “’twas grace that taught my heart to fear” – an act of God’s grace that brought him to judgement on his past life – “and grace my fears relieved” – before it took him to the salvation that removed the fear of penalty from the knowledge of sin.

And perhaps this gives another edge to the story of the fall. Go write back to the Genesis creation myth, where the first sin, the sin of Adam and Eve, was desiring the “knowledge of good and evil” – perhaps what they wanted was to be allowed to judge themselves, instead of being subject to another. And of course if we accept only our own ethical judgement for our actions, and no other, it is a very short step to all sorts of self justification, rationalisation, denial.

If the only standard we accept is our own judgement, how will we ever see past our own blindness, our own prejudice, our own false assumptions.

The first step in making anything right is to know that it is wrong.

The first step in anything resembling repentance – and growth – is an admission that we are in the wrong.

The first step in salvation is right judgement.

Irish theologian Peter Rollins writes that Church ought to be like an AA meeting: my name is Chris, and I’m a sinner in need of God’s judgement and salvation. But too often Church is the last place that we would be able to admit our failings, our doubts, our temptations.

Whenever we take communion together, we share together the body and blood of Christ with the words “broken for us, shed for us”. But broken is the very last thing that we are able to admit to being; we expect to have it together – we expect it of others, but worse, we expect it of ourselves.

Lent is, in many cultures and contexts, an opportunity for self reflection, for spiritual growth. I’m coming to believe that there is no growth without honest reflection, without a willingness to let light shine into the darker corners of our lives. I wonder if we have the courage to allow God’s grace to judge us, so that we might discover, with John Newton, God’s grace our fears relieved.