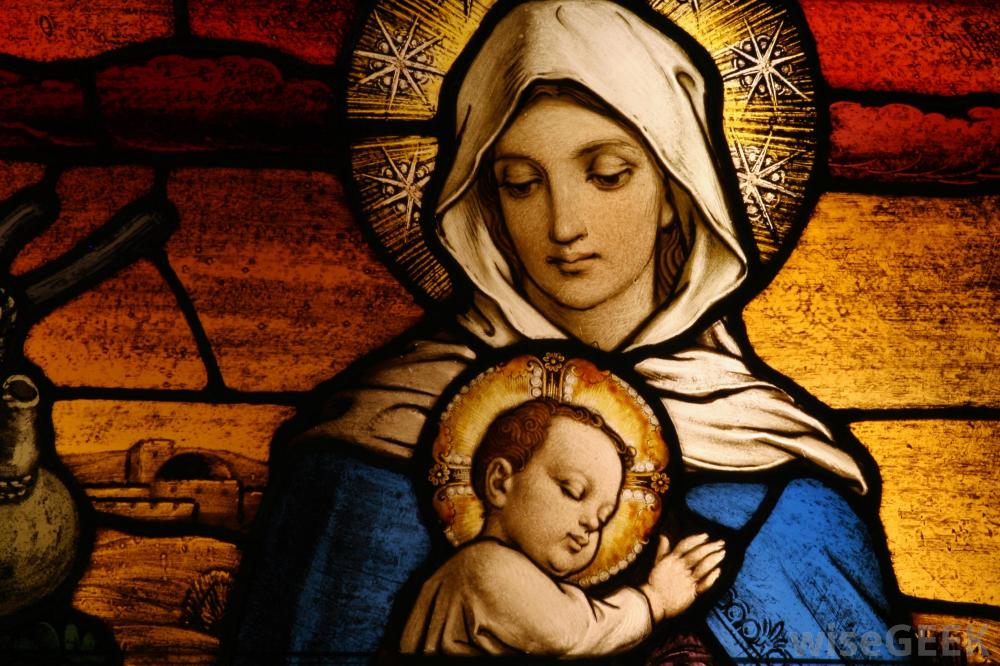 Matthew 1:18-21 | Luke 1:39-56
The last in our series of learning from the followers of Jesus takes us back, right back, to the first person who ever knew him. Back to Mary, his mother.

When I spoke about Mary Magdalene a few weeks ago I noted that a lot of stories, a lot of legends, had built up around her which had no connection at all to the Biblical text. That she had been identified as a sinful woman, in particular, as a prostitute. An identification which seemed to have more to do with the simplistic stereotyping of women than it had to do with the real person, the flesh and blood follower of Jesus.

And what was true for Mary Magdalene was just as true, if not more so, for Mary, Jesus’ mother. In the misogynistic tendency to define women simply in terms of their sexual activity, this Mary plays the Virgin opposite Magdalene’s whore. Her label is perhaps employed more favourably than Mary Magdalene’s, but it is just as disempowering, if not more so, just as reductionist, just as dehumanising.

Mary is rendered passive, a good girl who does what is asked of her. She becomes venerated as the vessel of God – a title intended as honour, but which reduces her to the role and image of a container ship, significant only because of the cargo that it carries.

Mary is given honour without influence, praise without agency, significance without importance.
All of which bears little or no resemblance to the Mary who is portrayed in the gospels.

I wonder if you’ve noticed that there are three appearances of angels in the nativity story; to Mary, to Joseph, and to the Shepherds (and not, despite the standard nativity play tableau, actually at the stable).

The shepherds cower in terror; Joseph just quietly does what he is told. Mary is the only one who turns her visit from an angel into a conversation – asking questions, pushing back, wanting to understand before she accepts.

That’s right – Mary argued with an archangel before agreeing to go along with God’s plan for her.
Not exactly the image of passivity.

And then of course, most famously, we have today’s reading from Luke, the Magnificat. I love this story, especially for some of the details Luke gives us, the hints to the backstory.

Mary has just discovered that she is pregnant – a matter of considerable disgrace for her, and Joseph (who has agreed not to break off the engagement, following the angel’s visit), and, indeed, her whole family. And she set out “with haste” to a town in the hill country, the home of her cousin Elizabeth.

Unmarried girl discovers that she is pregnant, and, probably still early in the pregnancy, goes off to visit her relatives in the country. To go and stay with an older, childless, cousin.
And that cousin, Elizabeth, of course, was also pregnant, a few months further on than Mary.

It looks like Mary’s family have found a way out of a shameful situation. Her pregnancy can be hidden from all the prying eyes in Nazareth, and in time she can return to marry Joseph as if nothing had happened, leaving Elizabeth to raise twins.

The family must have been so pleased with themselves when they came up with the plan. The young Mary doesn’t ruin her life, the older Elizabeth, so long desperate for a child, gets two, and Joseph – and everyone else – can pretend none of it ever happened.

But that’s not Mary.

This is the Mary who questioned an archangel. The Mary who declared that God would scatter the powerful and send the rich away hungry. The Mary who returned to her home early, still pregnant, to face whatever the world would say about her.

Mary who refused to let other people make her decisions for her. Who refused to conform to anyone’s expectations of her.

And so read again today the glorious and powerful words of the Magnificat. For in them, Mary speaks to us, as disciples, as followers of Jesus, her son.

And I would normally focus, when reading Luke chapter 1, on the revolutionary words of Mary’s song. For those are words that we, living in the privilege of Australia, in the Northern Suburbs, need to hear: for when Mary speaks of the powerful being brought down and the lowly lifted up, the poor fed and the rich sent away hungry, we need to acknowledge that we – as a nation, as a community, and, for the most part, as individuals, fall much more into the basket of ‘rich and powerful’ than that of ‘poor and lowly’. While we may not be the 1%, the super-rich, in global terms we are a lot closer to that end of the spectrum than the other.

We need to hear words of revolution that echo the teaching of the prophets, calling on us to share the blessings God has given us, and open our hands, our hearts, our homes, our communities, in generous hospitality.

We need to hear words of the revolution that the world needs more than generosity; that it needs justice; where we do not just give a hand up to those in need, but work to change the structures of our society that keep the poor, poor – the ordering of society that protects wealth and privilege, that ensures that the greatest single predictor of someone’s wealth is who their parents were.

We need to hear words of the revolution that sees Jesus’ radical inclusion of those who were marginalised – women, slaves, foreigners, sinners – and seeks to overthrow any law or custom which would discriminate against others on the basis of sex, race, sexuality, gender identity, age, nationality, culture or faith.

We need to hear those words in Mary’s song. But as we seek to live as followers of Jesus in the modern world there are other words in her song we need to hear as well.

The fact that you are here today places you into a small minority. That you profess a faith, and profess it with sufficient conviction to take time week by week, on Sundays and in the rest of the week, to meet with other believers, to pray, to learn, to worship, put you very much in the minority in the modern western world. And not, for the most part, a very highly thought of minority. You wouldn’t have failed to notice that the background assumption of the modern world is that to hold to a religious faith is evidence of feeblemindedness, superstition, or simple unwillingness to face reality. To be a person of faith – of any faith – is not, generally speaking, a widely respected choice.

And when we feel like that, when we feel that the things that we value are mocked – or worse, perhaps, ignored – when faith itself is regarded as an eccentricity at best, we hear Mary’s words: God’s mercy is to those who fear him from generation to generation… he has helped his people in remembrance of his mercy, according to his promise. We hear that God is still there; that God still stands besides those who choose to stand beside God; that in God mercy God helps those who are God’s people. Even – or perhaps especially – when they are not in charge, not powerful, not influential.

Hear Mary’s words speak over the arrogance of those who would declare that God is a delusion, that they know better: God has scattered the proud in the thoughts of their hearts.

Mary song is a declaration of faith by a woman who would not be put into a box, and who understood that God would not either. That God was neither the tame lion of the religious and cultural norms of her day, nor the toothless tiger of those who would deny God’s activity or relevance in the world of her day.

Mary invites us, as followers of her son, to that same sense of rebellion, of not thinking that the way things are is automatically the way they should be, of not accepting that we are powerless to make a difference, of never believing that God is silent, powerless, or absent.

Mary declared that her pregnancy was the herald of God’s revolution, and her discipleship invites us to join in.