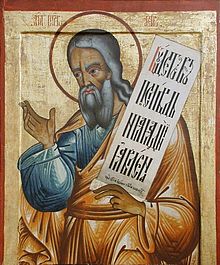 Isaiah 6:1-12 | Matthew 13:10-17
When, earlier in the year, we invited everyone to write down the one thing that they would love to hear a sermon on, there were a few suggestions that sort of clustered together. In particular, quite a few people wanted to talk about the Bible; not just what it says, but what it is, and how we use it, how it speaks to us in such a different age to the one in which it was written. There were requests to think more about what meaning the Old Testament has for us, as Christians, and a couple of people specifically mentioned the book of Isaiah.

So for the next six weeks (well, seven, but we’re taking break part way through to have our annual respect for seniors week [refugee week]) we’re going to be looking at the book of Isaiah, but in particular we’re going to be looking at some passages from Isaiah that are used by the authors of the New Testament, as a hint, perhaps, as to how the Church has, and perhaps might, draw the wisdom and the narrative and the revelation of God that is found in the Hebrew scriptures into our own faith.

So today we begin with a relatively well known passage of Isaiah – the calling of the prophet.

The narrative begins with this apocalyptic, surreal, almost fantastical vision that Isaiah has of God, and Isaiah’s famous “woe is me” response. I don’t want to dwell on this part of the story too long, just to mention one thing that I really love about the way that Isaiah responds.

When Isaiah sees the Lord, he doesn’t say “At last! Now you will vindicate me! Now everyone will know that I was right!”. No, Isaiah’s first reaction was to identify himself with his people, and with their sinfulness. “I am a man of unclean lips,” he says, first; and only then “and I live amongst a people of unclean lips.”. Isaiah recognises the failings of the nation; but he does not claim himself to be any better. Instead, his first reaction when he has a vision of God is to know his own failures.

Just as Simon would, hundreds of years later, when he first realised who Jesus was: “Go from me, Lord, for I am a sinful man”.

It almost seems to be a prerequisite for those who God will choose to call; that they start off by being first and foremost aware of their own shortcomings, not confident in their own power and righteousness.

But that’s a whole other sermon.

For it isn’t the call of Isaiah that gets picked up on by the authors of the New Testament. It’s the second half of our reading that is quoted by all four of the gospel writers and again, by Paul, in the book of Acts:

And in some ways, they sum up, for me, at least, one of the really deep problems that we have when we read the Old Testament. I think of it as the “God hardened Pharaoh’s heart’ problem: that there are many places in the Old Testament narrative in which God is portrayed as causing people to morally fail – in the Exodus story, the Pharaoh agrees to let the people go several times, but ‘God hardens Pharaoh’s heart’ so that he changes his mind – apparently in order that God might then be able to show God’s might by inflicting further plagues on the people of Egypt.

And here in Isaiah, God’s command to the prophet: make their minds dull, shut their eyes, stop their ears, so that they might not look and listen and comprehend, and turn, and be healed.
I hope it’s fairly clear why I find this a difficult passage, a difficult description of God. The God who, we read elsewhere, longs for all people to return to God’s fold, is portrayed as deliberately preventing the people to whom Isaiah would speak from doing so.

So what are we to make of it, what do we do with passages like this? Are we tempted to just write them off as no longer meaningful or relevant – well, tempted, yes, but how can we do this when the gospel writers cite Jesus as quoting them?

The answer, of course, is that we need to take them more seriously, not less. This, I believe, is the challenge that we face, at Roseville Uniting Church, as the sort of Church that wrestles to walk a path between the naïve literal Biblicism that is the caricature of fundamentalism, and the fast and loose rejection of the scriptures that is the caricature of liberalism. That we take the Bible too seriously to either read it literally, or to not read it at all.

So I want to suggest two things that we need to do with this passage and others like it. The first is, of course, to put it into its context; the second is to see how the words have been heard and reheard by the community of faith – and in particular, by those who heard them in the light of Jesus.

So first, the context. It’s almost certainly the case that while the call of Isaiah took place before the fall of Judah and the people being taken into exile, the words didn’t become a literary work, they weren’t organised and written, until later; this section, probably while the people were in exile. So the concern of the scribe who set quill to parchment to first record for all time the words of the prophet that had been passed down until then in oral form, was to explain what had befallen the people of God; how it was that the defeat of God’s people did not imply the defeat of God – that Babylon conquering Israel did not mean that the God of Babylon was greater than the God is Israel.

And so you get this amazing humility that runs through the historical and prophetic writings of the Hebrew scriptures. Think about it: most people, when writing their history, claim credit for successes, but assign blame elsewhere for their failures. The Old Testament does exactly the opposite. Whenever the people prosper, it is because of God; whenever they come to harm, it is because of the sin of the people.

But even that isn’t enough; for the radical monotheism that was the central revelation of God to the Hebrew people – that there is not a pantheon of Gods at war with one another, but one God, over all – required that if something happened (and remember, the words are being written after the people were taken into exile), it had to be due to the agency of God.

And so we get this strange multiple agency that permeates the Old Testament; the people suffer because they have sinned; but at the same time God is portrayed as the ultimate source even of their failure to repent.

At times as you read the Old Testament you can almost feel the authors wrestling with this tension, arguing with one another – for make no mistake, the Old Testament scriptures are fundamentally an argument about God, not a treatise.

But one more thing about the context; as we read the words of the prophets, there are always some who hear, some who respond. When Elijah complains to God that he’s the only one, God replies “I have reserved seven thousand who have not bowed to Baal”. The broad statements made: “make the mind of the people dull” are just that; broad statements about nations and communities, not a puppet-like control of individuals. This doesn’t make the problem go away; the idea of God moving nations around like pieces on a chessboard is still problematic; but it does give us a way into understanding how we each as individuals retain a moral agency, a moral responsibility, a divine opportunity to choose to be on the right side.

And then we turn to the gospel, and look at the words of the prophet in the mouth of Jesus, as recorded by the author of Matthew’s gospel.

And I wonder if you noticed as you listened to the two passages being read.

It is the people who do not see, do not hear, do not understand, because they have chosen to shut their eyes to what God was making known to them.

So what Jesus does is to take an Old Testament prophecy, words that would be familiar to his audience, and to draw a parallel between the events of which the prophet spoke and the contemporary events. In doing so he doesn’t declare “this, what is happening now, this is what Isaiah was talking about”; for clearly Isaiah was talking about the stubborn rebellion of the Jews of eight centuries before. Instead he says “Learn the lessons of your history. You look back as critics on the behaviour of your forebears before the exile; I’m telling you, you are making the same mistake over again”. Or in the words of Steve Turner: “History repeats itself. Has to. Nobody listens.”

But the repeat is not just an echo. It is a development, an advance in understanding, learning from what has gone before.

So this perhaps is a model for us, in our reading of the Old Testament scriptures; not blindly applying them to our age, not taking ancient law out of context, but looking for the patterns, seeing how God has been at work throughout history, and reinterpreting, reunderstanding those words for our time.

That, perhaps, is what we’ll be doing over the next few weeks.