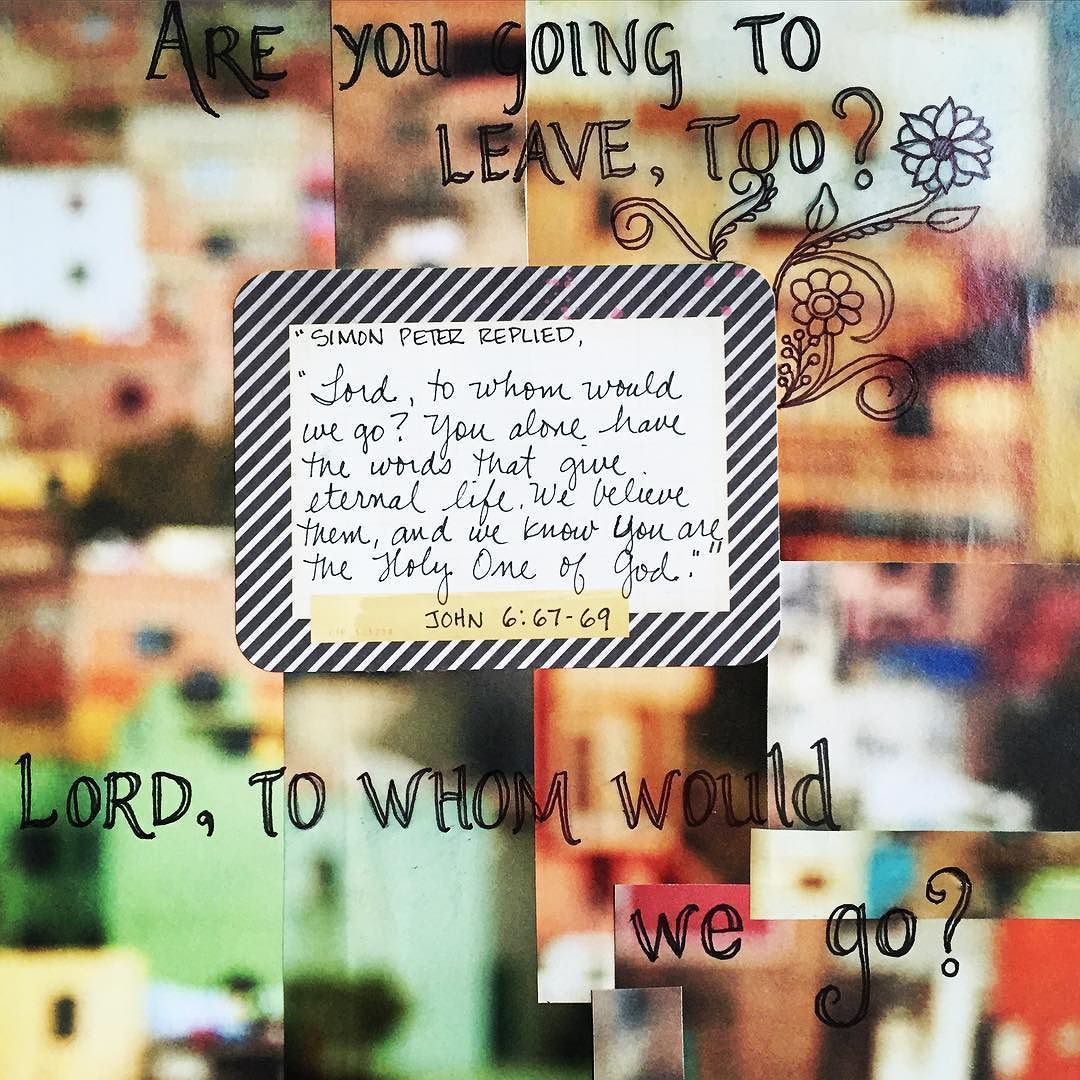 To whom would we go?

John 6:56-69
While we’ve been looking at the letter to the Church in Ephesus, the gospel readings in the lectionary have been going through a chunk of John’s gospel that is all built around the imagery of bread: riffing off the feeding of the five thousand, he has taught the crowd that he is the bread from heaven, the living bread, and has declared to them that it is he, not the manna in the desert, not the bread and fishes in the feeding of the five thousand, but he himself that is the true bread, the true, basic nutritional food, not for their bodies, but for their lives, for themselves.

And he ends in this passage today: that it was by eating his flesh that one could experience eternal life; life with God, here, and hereafter.
Whoever eats my flesh abides in me… whoever eats me will live.

And many of the disciples found this teaching hard, and many of his disciples chose, at that point, to stop following him.

And notice that word – disciples. It’s not that many of the crowd of onlookers heard these things and said “no, that’s not for me”; it was many of his disciples. Not the twelve; but many of those who had already chosen to become students of this Rabbi, learners at the feet of this Guru.

And there’s something here which on the surface seems a bit strange. Because Jesus has lots of hard teachings. I mean: love your enemy – that’s hard. Forgive the one who sins against you seventy seven times – that’s hard. Give to all who ask, expecting nothing in return – that’s hard.
But “eat this bread of heaven” (which we’ve basically translated into “come and have communion from time to time”)? What was it about that teaching that was so hard that people who had opted in to the Jesus movement now opted out again?

But of course the puzzle that question betrays our hindsight. For we come to this part of the story knowing the end. But for the crowds, and the disciples, and, for that matter, the twelve, the revelation that Jesus was not just a prophet, a rabbi, a teacher, but something far more: in John’s language, the Word of God made flesh; that revelation still lay in the future.

Some of them, perhaps, had started to guess at it: they’d seen him walk on water, after all – but then, that wouldn’t have been outside of expectations of a prophet, given the miraculous events surrounding the prophets of the Old Testament stories.

So many of his disciples, faced with these words, with their connotations of human sacrifice and cannibalism and stuff totally abhorrent to the Hebrew mind, turned away. They no longer wanted to follow him. When he was healing and teaching, that was great. When he miraculously multiplied the food for the crowd, that was even better. But when his teaching moved into the language of ‘eat my flesh, drink my blood’, they were out of there.

But not everyone. There was something that the twelve (and many others – for it was not, by any means, all of the wider group of disciples who chose to abandon Jesus at this point) something they had got, had seen, had understood, that the others had not.

And we know pretty well from the way the disciples responded to Jesus’ teaching a lot of the time that it wasn’t a case of them being smarter, or more perceptive, or braver, or better people; they weren’t those things. We see plenty of times that those closest to Jesus were often just as confused by his words as anyone else.

No, it wasn’t that they understood. The thing that made the difference was simply this – in the words of Peter:

‘Lord, to whom can we go? You have the words of eternal life.’

They didn’t understand Jesus’ teaching. But they do understand one thing.

They knew where to look.

Where else would we go? Your teaching might be hard – hard to understand, hard to accept, hard to obey – but where else are we going to go? You have the words of eternal life. We’ve figured out that much. And if that’s true – we’ve going to stick around, whatever might come, because we need to hear these words, eat this bread, live this life. Where else would we go?

This is, truly, the core declaration of Christian faith. At its heart our faith is not a declaration of, an assertion of a creed; nor is it membership of an organisation; nor is it conformance to a particular way of life. At its heart belief in the Christian faith is that question, that trust, that hope, that despair: where else would we go – for you have the words of eternal life.

Do you recognise that cry? The words of the confused, the doubtful, the struggling; but at the same time, the grip on one unchanging core: You have the words of eternal life. We have come to believe and know that you are the Holy One of God

They don’t know what it means. They don’t know how to make sense of what he is saying to them. They don’t understand what ‘eat my flesh’, ‘drink my blood’ means. How could they? Maybe they are just used to Jesus saying strange things, and to hoping that it’ll make sense somewhere later down the track.

But somehow through their time with him, they have come to believe and know that he is the Holy One of God. They have concluded that though they might not understand all of what he is telling them, nonetheless he has the words of eternal life; that he is the one who can tell them what life is really about, what it all really means. And not just the one – the only one. “Who else would we go to?”

There have been plenty of times in my life, and I’m guessing it might be true for you as well, when the teaching of Jesus has seemed too hard, or too unreasonable, or just too incomprehensible for me to feel as if I could do anything with it. There are still plenty of passages that I read in the Bible where my response is either “huh?” or “you’ve got to be kidding” or “God did what?”.

Which is why it’s always encouraged me that the portrait painted of the disciples in the gospels is so imperfect, so puzzled, so – often – just plain wrong.

But Jesus doesn’t leave them. He doesn’t go off and find better disciples. He doesn’t (often) get angry at how slow they are to understand (although there are places where Jesus’ frustration with them does seem to break out – ‘why are you so slow to understand’, ‘oh you of little faith’). It’s as if he knows that it is going to take them time: he gives them three years of his life, his presence, his ministry, and even at the end they still don’t understand.

Because they have grasped the one thing that matters above all else: that this is who they need: need to be with, need to follow, need to learn from, need to live for.

Our faith will always be something that is above us, beyond us, more than we can understand or accept or live up to.

But in Peter’s words we here what is probably a truer confession of faith than any number of creeds or confessions.

Where else would we go?