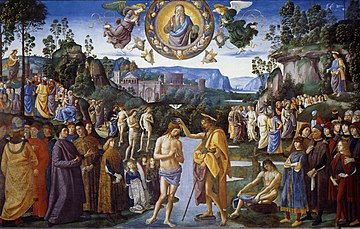 The fact that we have four different accounts of Jesus’ life, recorded in the four gospels, is both a great blessing and a potential problem.

One aspect of the problem comes from attempts to harmonise the four gospels into a single, definitive account of the life of Jesus. But if you’ve ever tried to do this, you quite quickly discover that the four writers use their materials in ways which simply cannot be combined in that way. If we apply the standards of modern biography or historical account to the gospels, they fall far short of our expectations.

But once you realise that, and understand that a gospel is written (as the name suggests) to convey good news, not as a historical account of a life, the differences between the gospels becomes a gift to us, rather than a problem. For each of the writers, with their own audiences and concerns, brings out a different aspect of the life and ministry of Jesus; four different perspectives giving us a depth of insight that would never come from a single telling of the story.

One result of this is that there are very, very few stories which are found in all four of the gospels. The death and resurrection of Jesus, of course, but even there, the choice of details and even the structure of the story differs from writer to writer.

But here, right at the start of the ministry of Jesus – they all start here. With the baptism of Jesus, in the Jordon, by John.

Today’s account comes from the gospel of Matthew – for as I’ve mentioned, this year, the three year cycle of the lectionary that the Uniting Church, along with many, many denominations, both Protestant and Catholic, follow, focuses on the gospel as told by Matthew.

The baptism of Jesus was considered an important enough part of the story that all four of the writers chose to include it. So what is it about this story?

And when you look at sermons preached on the baptism of Jesus – and I certainly include my own in this (although I think I’ve only ever preached once or twice on this subject, probably because I’m normally on leave this time of year!) – the pressing question seems to be “why did Jesus get baptised?”.

And I don’t want to understate the importance of that question, especially in the light of John’s words, that his baptism was for repentance. For it has always been the confession and claim of the Christian faith that one thing Jesus did not need to do was to repent, that he, uniquely, had no sins to confess.

And to my mind the most satisfying answers to the question of Jesus’ baptism lie around the idea of identification; that though Jesus had no need of baptism for repentance, his mission, his calling, the very nature of the incarnation was that he would so closely identify with us, with humanity, that what we needed, he chose.

Our baptismal liturgy includes the words “In his own baptism in the Jordan by John, Jesus identified with humanity in all its brokenness and sin”. And so, surely, he did.

Yet there is another story of identity happening at Jesus’ baptism as well – the voice from heaven (or perhaps the dove, pick your gospel for details) declaring “this is my Son, the Beloved”. At the same time as Jesus identifies with us, God identified him as God’s child, God’s beloved. Not, I’d suggest, as a contrast to him being one of us – on the contrary, I rather think that it is as one of us that God names Jesus God’s beloved child.

But today I’d like to go somewhere a little different with this baptism story, and ponder, for a while, what John was expecting, as the one who came to prepare the way, what he was thinking when Jesus came to be baptised.

For which we need to rewind a little before the start of today’s story, and read what John said about the one who was to come.

John – the last and the greatest of the prophets, as Jesus himself will later name him – the one who came to prepare for the messiah – had this to say to the religious elite who came to him for baptism:

But when he saw many Pharisees and Sadducees coming for baptism, he said to them, ‘You brood of vipers! Who warned you to flee from the wrath to come? Bear fruit worthy of repentance. Do not presume to say to yourselves, “We have Abraham as our ancestor”; for I tell you, God is able from these stones to raise up children to Abraham. Even now the axe is lying at the root of the trees; every tree therefore that does not bear good fruit is cut down and thrown into the fire. ‘I baptize you with water for repentance, but one who is more powerful than I is coming after me; I am not worthy to carry his sandals. He will baptize you with the Holy Spirit and fire. His winnowing-fork is in his hand, and he will clear his threshing-floor and will gather his wheat into the granary; but the chaff he will burn with unquenchable fire.

John speaks into a world in which he can see wrong. He can see the neglect of the poor by the rich, the abuse of the weak by the powerful, and worst of all, the use of religion to justify these things. He calls on all to repent; but those in religious power, both of synagogue and temple (for those were two quite distinct religious powers in the day of Jesus, as we will see later in Matthew), the Pharisees and Sadducees, are singled out for his criticism.

And his language is full of judgement. “I baptise with water, for repentance … he will baptise with fire … his winnowing-fork (a tool used to separate grain, for use, from chaff, to be burned) is in his hand”.

This is what John preached that he was preparing the way for. His call to repentance had a definite edge of “or else” about it. “The Messiah is coming. He will judge. Turn or burn.”

And how could he not think like that, brought up as he surely was on the Old Testament prophets? If, as seems likely, John was heavily influenced by, or even part of, the Essene sect (communities of Jews who separated themselves from the masses, in the wilderness, in search of holiness – we know them best as the keeper, in Qumran, of the dead sea scrolls), then it makes more sense still; for the Essene strongly emphasised those aspects of the Old Testament that spoke of the judgement of God to come.

And it’s an expectation we see coming back, over and again, through the gospels – James and John asking Jesus “shall we call down fire and burn them up” – or the disciples after the resurrection asking “is it now that you will restore the kingdom” – or all the times when people expect the Messiah to bring political freedom, with the overthrow – judgement – of the Romans.

But Jesus refuses John’s expectations; he refuses to baptise. Indeed, it is one of the oddities of the gospels that we never seem to hear discussed that Jesus never baptised anyone. He refuses the play the part in the story that John has written for him – and instead, asks John to baptise him.

Coming to John with the crowds, at the start of his ministry, Jesus chooses to identify himself with those others who have come for baptism, those who came with confession, for repentance – the common people, and the religious elite who earned such condemnation from John.

There can surely be no doubt that if Jesus had chosen instead to bring judgement, he would have been just – he would have be right, beyond reproach. But in the first act of his public ministry he makes it clear that judging others, even judging rightly, is not his priority. Standing with them is.

I hear these words as a challenge – a rebuke – for I love to be right. I love to make good, sound, judgements about the decisions other people make – even if I normally keep my thoughts to myself. There is a great feeling in being able to see where someone else has gone wrong, and knowing that you would not have made that same mistake.

Against this attitude, Jesus’ baptism stands as a declaration: instead of standing over you to judge you, I came to be with you.