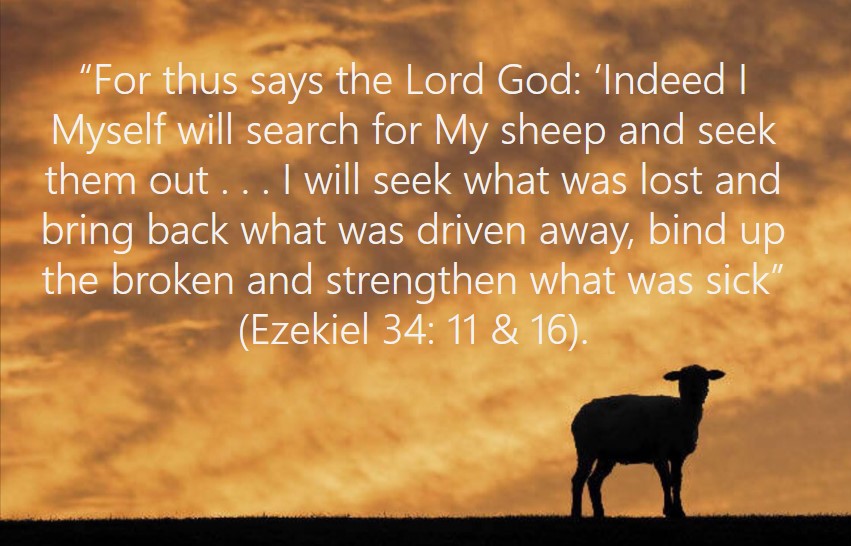 I will seek out my sheep

Over the past few weeks, the words we’ve heard from the prophets have been challenging. They’ve been words which don’t sit comfortably with the status quo, words that call us to a justice which asks much of us, which invite us into a struggle which often sets us against the powerful in the world.

And that’s one of the major themes of the prophets. Pick a random passage out of the prophetic works and I reckon you’ve got a pretty high chance of finding that it is condemning some injustice, some abuse of office by the powerful, some oppression of the poor by the rich, of the powerless by the powerful.

And whenever we read those passages we need to be incredibly self-aware. For it is so easy to place ourselves alongside the prophet, condemning injustice, or in the shoes of the victims, feeling our own suffering. But if we are honest with ourselves we must surely recognise that we, as the global Church, are all too often more easily identified with the abuser than with the abused.

You may (or may not) know that this week has been trans awareness week. So I asked permission of a good friend of mine to share a small part of her experience. A couple of years ago, after thirty or more years of knowing that she did not fit as the man everyone thought she was, she publicly came out as a trans woman. And of course it was a huge shock to everyone who knew her – myself included – but the vast majority of people accepted her transition at face value, tried to remember to use her new name a pronouns (sometime forgetting, but always trying, which was all she asked), and quickly rediscovered her as a far more relaxed and ‘comfortable in her own skin’ person as the women she had always known herself to be.

The exception, of course (and how sad are those words – ‘of course’) was her Church. It was the leadership of her Church that, despite her many years of active and committed involvement, denied her experience, questioned her faith, rejected her service, and even voted to not recognise her marriage, effectively driving her and her family from the faith community they had called home.

At the same time, many, perhaps most, within the Churches of the world have been amongst the most tireless in working for justice, in giving their time, their energy, their money to help and protect and raise up the marginalised and the disadvantaged. Survey after survey shows that people of faith are more generous with their giving (even in giving to non-religious causes), and more likely to volunteer in their community.

So we have this strange duality at work. The people of God working for the good of all, through the generations: setting up schools and hospitals and working in them; forgoing high paying career options to work in healthcare, social services, education; volunteering in their communities, visiting the sick in hospital, taking casseroles to single parents with new babies, cooking breakfasts at school for kids who can’t be sure of a good meal at home – while at the same time the Church was covering up the scandals of sexual abuse and financial impropriety, donating funds to support regressive and hurtful political campaigns, and hounding faithful individuals out of their congregations because of their sexuality or gender identity.

And it’s to this duality that the prophet speaks in our reading today. Because if you go back to the start of Ezekiel 34, you find that it makes this sharp distinction between the shepherds and the sheep.

As is so often the case in the prophets, the voice of God speaks with anger at those who were responsible for the care of the people, because they have not done their job. God’s anger is not somehow contradictory to God’s love: God’s anger is because of God’s love, because God sees those in need being neglected, or even abused, by the ones who should have been caring for them.

And because the shepherds have, again and again, failed in their duty, God promises a new approach: God as shepherd.

As shepherds seek out their flocks when they are among their scattered sheep, so I will seek out my sheep. I will rescue them from all the places to which they have been scattered … they shall lie down in good grazing land, and they shall feed on rich pasture … I myself will be the shepherd of my sheep, and I will make them lie down … I will seek the lost, and I will bring back the strayed, and I will bind up the injured, and I will strengthen the weak.

And this, of course, is the promise that Jesus identifies with, when he famously declares “I am the Good Shepherd – I call my sheep by name, and they hear my voice and follow me.”

It’s actually a theme that resonates through the prophets and the New Testament. From Joel’s declaration that God will “pour out the Spirit on all people”, fulfilled at Pentecost, to Jesus ‘call no-one rabbi, for you have one teacher and you are all students, call no-one father, for you have one father – the one in heaven’, to the tearing down of the temple curtain, symbolising our universal access to God, to Paul’s ‘through Christ we all have access in one Spirit to the Father’.

That in the time that was to come – the time of the Kingdom of God that Jesus ushered in – people would no longer be dependent upon their leaders, whether political or religious, to mediate their access to God, their relationship with God.

The promise of God, made to a people who had been let down by their leaders, by the people who ought to have been their shepherds, their priests, their faithful kings, their teachers: I, myself, I, your God, I will do this.

I will give you the care you needed from those who have let you down.

But as with so many of the promises of the Bible, we live in this strange in-between time; a time in which the promise is coming into reality, but is incomplete, partial, often advancing but sometime regressing. The day the prophet spoke of, when all will know God simply and directly, when every tear will be wiped away, every injury bound, every weapon of war silenced, is promised but not yet, worked for and anticipated, but still as a hope, not a present reality.

And so the prophets still speak to us with two voices. For in this in between, we, all of us, are both shepherd and sheep. We each shepherds, holding positions of responsibility, we each have people who look to us for help, for guidance, for advice, for protection, for leadership, for wisdom, for inspiration. And so we need to hear the warning spoken against the shepherds who abused their power for their own benefit, who fattened themselves at the expense of others, who used their influence to hurt those most vulnerable.

And we need to hear the words of God: I will be your shepherd. I will call you by name.

I will seek you out from the places that you have been scattered by the wind of the world, I will find you, and I will bring you home.

I will see that you are injured, and I myself will bind your wounds.

When you are weak, I will give you strength.

When you need rest, I will make you lie down, and I will watch over you.

I will seek out my sheep.