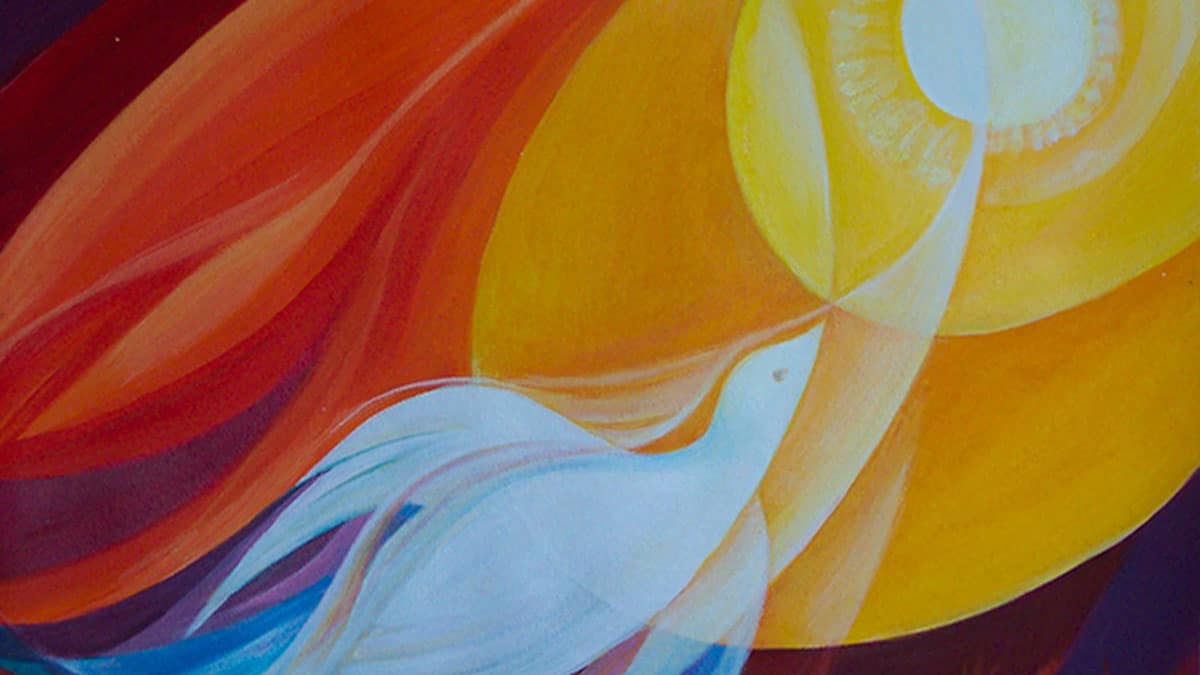 We’ve jumped back this week – from a series of four Sundays in which we’ve been looking at the way that the early Church acted, and the way it grew – its internal struggles with the radical inclusion of those who had previously been excluded, it’s living out of the love of God in acts of generosity of heart, its courageous decision not to insist that those who joined the movement had to become like those who had started it – its attempt to imitate the example of Jesus, in both his welcome of the outsider and his challenge to those who misused their power.

They’d travelled with Jesus, worked with him, listened to him, tried to understand and emulate him. Then he’d been taken from them, and executed, and then, beyond the end of hope he had returned.

For forty days he had been there, on and off, teaching them once more. And then, at the miracle of the ascension, he departed once more.

Leaving them with a promise, but at the same time, leaving them alone.

So they gathered together – they got all the followers of Jesus, men, women and children, together, and they prayed together.

And I have to wonder – just what it was that they prayed? Were they praying for Jesus to return? For at the ascension they had heard the words: “he will come back in the same way that you saw him leave”. Or were they praying for a new leader? Or for wisdom, or courage?

Perhaps, inspired by the vision of Jesus’ departure, they were reminded of the promise Elijah made to Elisha, before he was taken into heaven in a very similar way: that the one who saw the prophet depart would receive a double portion of his power.

Most likely, I would guess, they didn’t know what to pray. Perhaps they fell back on the prayers Jesus had taught them, or the psalms, or other prayers they had grown up with in the synagogue.

I think it’s probably a fairly safe bet that they weren’t praying for what happened next. But it’s also a pretty safe bet that whenever God does something world changing it takes God’s people as much by surprise as it takes everyone else.

But what they weren’t doing, was – well, anything else. Because if they had only learned one thing in three years with Jesus it was this:

They weren’t going to achieve anything without him.

Experience with Jesus had shown them that when they were with him, anything was possible. The blind could see and the lame walk, those held captive by evil could be free, the thief, the terrorist, the collaborator, the prostitute – all could change, all could find a new way of life, a new purpose, a new sense of who they were. With Jesus they could face down opposition, deal with criticism, speak the truth to weak and powerful alike. With Jesus, they knew they were a force to be reckoned with.

But without him? Without him they were a rabble; confused, cowardly, jealous, competitive; about as dysfunctional as any group of people picked more or at random and thrown together. They wanted to do the work of God, the work of the Kingdom, but it just didn’t work.

It just didn’t work without God.

And Jesus had made them a promise. It’s a promise we remember every time we light the Christ candle in Church; the promise that he would be with them, even to the end of the age. That whenever they gathered in his name, he would be there. That his people would never walk in darkness, never walk alone.

And when Jesus had been taken from them, at the crucifiction, those words must have rung in their memories like a mockery of all their hopes and dreams, all their expectations of a king and a kingdom.

And then he had come back, returned to them – and then left again. And if anything, that second departure must have been even more confusing than the first. For him to be taken from them made sense – devestating sense, for sure – but for him to choose to leave? To have their hopes and expectations dashed once more, just as hope had been rekindled?

But he had left them with a command – wait in Jerusalem – and a promise – you will receive power. And they clung onto these words, through the fear and confusion that surely gripped them.

And now, at Pentecost, the time had come for Jesus’ promise to be kept.

Perhaps, with hindsight, they might have seen that there was a difficulty with the promises he’d made them. To always be with them, whenever they gathered together. And not just with them, but with all those who came to believe through them.

And they were to be his witnesses; not just in Jerusalem, but in Judea, Samaria, and to the ends of the earth.

How could one man; even Jesus; keep these promises? If the good news of his Kingdom was to spread, to be preached in every corner of the world; if small groups of believers were going to spring up in villages and towns and cities across the Roman world and beyond, and gather together in his name and for the work of his Kingdom; if they were to meet in Synagogues and city squares and private houses and by the sides of rivers; how would he be with them? How would he keep his promise?

Pentecost was the answer to that riddle.

And not just in the sense that God was always everywhere. For of course part of the Jewish and Christian – understanding of the Spirit of God was that there was nowhere in all creation that God was absent. The psalmist wrote:

Where can I go from your spirit?

Or where can I flee from your presence?

If I ascend to heaven, you are there;

if I make my bed in Sheol, you are there.

If I take the wings of the morning

and settle at the farthest limits of the sea,

even there your hand shall lead me,

But alongside this sense of the everywhereness of God, there was also an understanding of God’s special presence in some places – the burning bush, the holy of holies – and with some people – the prophets, the judges. And it is this understanding of God’s presence that Joel took and expanded in his prophecy, and Peter claimed as the meaning of Pentecost:

“I will pour out my Spirit upon all flesh”

The Old Testament prophecy – that a day would come when the special presence of God would not be restricted to a chosen few, but given as a gift to all God’s people, young and old, slave and free, male and female – and Jesus’ promise that he would be with his people always, even to the end of the age, come together in the mystery of Pentecost.

Joel’s prophecy had foreshadowed much of what was to come, much of what we have reflected on in the past weeks. The breaking down of barriers – young and old, slave and free, male and female – the radical vision of God’s presence being available to all, not mediated through the professional priestly caste.

But read the rest of Joel, and you find he was still a man in his culture, in his worldview. Joel chapter 3 speaks of the restoration of Israel – and of war. Of beating ploughshares into swords (yes, that way round) and judging the nations, laying waste to Egypt and Edom, selling the people of Philistia into slavery.

Pentecost was a Jewish festival, and the sending of the Spirit at this Pentecost was still reserved for within the Jewish faith. It was not until Peter saw the Spirit poured out on Cornelius’ household “in the same way” that he would come to understand the unlimited, boundaryless inclusion of the reign of God.

But it was Pentecost that made it possible. The pouring out of the Spirit of God on all people that made real the promises of Jesus: “I am with you always, to the end of the age” and “wherever two or three gather in my name I am with them”.

A King who promised to be personally there, always, in the presence of every one of his citizens would be doomed to rule over a very small kingdom.

A faith which gathered around a single candle would be a very small faith.

This is radical inclusion – that no-one has an exclusive hold on God, a special claim to Jesus, a monopoly on truth. There is no privilege in age or in youth, in education or in ignorance, in ordination or laity, in male or female; there is, despite appearances and the way we seem to organise our institutions, no “us” who gets to decide whether or not to include “them”.

At this table, all are welcome.