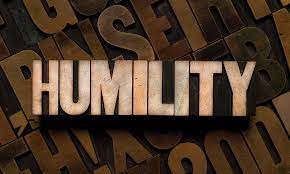 Humility for the win

This week Sureka I will be celebrating our twenty fifth wedding anniversary. Now while many of the details of the preparations for the wedding have faded into the midst of time (actually, I managed to avoid much of the planning by the cunning strategy of still being in England when decisions had to be taken), one thing that does stick in my mind was the incredible process of making a seating plan for the reception.

Working out which tables, and which seats at each table would be considered ‘better’ and ‘worse’, and then who would be offended if they saw someone else seated in a better place than they even though they were both second cousins once removed – this was a Tamil wedding, the extended family were there in full force, and relationships quickly get complicated. I’m not sure that the teenagers who ended up on a table with little kids because we remembered their age wrong ever forgave us. It’s one of the few parts of the whole process that made me think it might be better if our kids, when the time comes, just eloped.

At the wedding banquet Jesus describes, the situation is much more complex, much more fraught with social pitfalls. For his was a culture in which honour and shame were far more highly valued – and carefully tracked – than ours.

But Jesus’ message, at least, seems to be fairly simple. When you come into the banquet room, don’t push yourself forwards, don’t claim the highest place. To do so is to run too great a risk – the humiliation you will experience if you overreach and find yourself publicly demoted.

No, instead, take a place at the back, and then when the host calls you to move to a better seat you will be doubly honoured. Humility for the win.

That is, if the host does call you forward.

Because of course the problem with the strategy that Jesus proposes is that most of the time the host isn’t going to notice that one of their guests has humbly taken a seat at the back. Of course, if you are important enough that your absence from the top table is obvious that’s one thing – but in that case you wouldn’t have been in danger of demotion in the first place. No, if you’re a middle-ranking guest, no-one is going to notice that you’ve sat at the back near the door to the toilets.

And any of the other guests who do notice will assume you are there for a reason. They’ll probably start to speculate about what you must have done to be in such disgrace. Taking a seat of little honour is more likely to be self-fulfilling prophecy.

And then of course you’ll be sitting with other people who have little or no honour, you’ll miss out on the conversations at the important tables. You’ll be mixing with the low-honour crowd, and their lack of status will rub off on you just as much as you would have hoped to gain honour by sitting near the host.

No, Jesus’ strategy makes no sense in the culture and currency of honour and shame that defined social standing in the first century world. But it isn’t meant to. Jesus isn’t really giving advice on how to behave to gain maximum benefit in the cut and thrust of society. As is ever his way, he is disrupting the status quo, and challenging the assumptions behind it.

Because most of his listeners would have gone through exactly the same logical steps as I outlined and come to the same conclusion. Taking the seat at the back doesn’t make sense.

Unless you change the rules of the game.

Which, of course, is exactly what Jesus is challenging them to do.

Because he goes on to challenge the wisdom of the day in a much more direct way: “when you throw a dinner, don’t invite people who will invite you back – because then you will have been repaid”. Which was exactly the point. You invited those who were likely to offer an invitation in return. That was how it worked – you scratch my back, I scratch yours. And the people you mixed with, the people you invited, and who attended, they defined who you were, where you fitted in. What you were worth.

And that is a far more important attitude for Jesus to challenge than any social conventions regarding who sits where.

“Don’t invite those who can invite you back – invite the ones who can’t. The poor, the cripple, the blind. The ones who are outcasts, the ones who are so low down the social pecking order that they have nothing to offer you back – no return invitation, to be sure, but no honour, either, no status, no prestige. Invite them, and trust that your reward will come from God”

What Jesus has done through this exchange, this pair of discussions, is ask the question, raise the challenge: where are you expecting to get your reward from?

Because all your careful attempts to get yourself into a seat of honour, to get into the right circles, the right conversations, to be seen with the right people; and your careful choice of guests when you throw a party, they both come from the same place. They both come from your desire to get a reward from those around you, from your society. Whether that reward be as simple as a meal in return, or as subtle as respect and honour, it’s still the same – you are looking for the reward that other can give you.

And it’s a pretty constant theme in Jesus’ teaching: do things that earn you a reward, that earn you the respect and admiration of others, and you’ve had your reward already in full. That’s the economy of the world. Play by the world’s rules, earn the world’s rewards.

But do good when no-one notices you, when you don’t earn praise, when you don’t get payback – then you’re playing by a different set of rules: the rules of the reign of God. Acting, in fact, Jesus says, like God, the one who gives without expectation of reward or return, but simply because to give is what love does.

We are invited to come as guests without status or honour, for though we do not deserve a place of respect at the great banquet, we come anyway, and take whatever place there is for us, and that when we do, the host will lift us up, honour us with a place we do not deserve.

But perhaps one lesson of humility is that we shouldn’t be too concerned about the whole public appearance of the Christian faith. We don’t control it, and in a sense, it shouldn’t matter to us. Why care what others think of us?

Perhaps we should worry less about what the world thinks of Christians, and more about how we live and love and serve that same world. Perhaps taking the seat at the back means putting our energy into our mission more than our image, our service more than our reputation. Faithfully loving those that God places around us and not worrying about how it looks.

And just perhaps, we will then hear Jesus’ words: “Friend, move up higher”, and find that there is truth in his saying “those who humble themselves will be exalted”.

Or perhaps we won’t. But even then, we hold the promise: “you will be blessed, because they cannot repay you, for you will be repaid at the resurrection of the righteous”