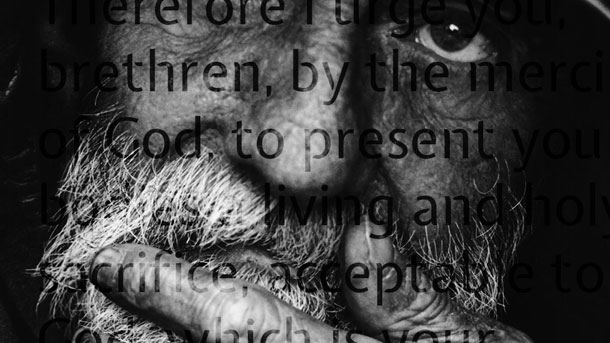 Last week we came to the end of the first half of the book of Romans, the conclusion of Paul’s argument from grace; that we, each of us, stand before God justified, adopted, beloved children of God by God’s free gift, given to us in Jesus Christ, received by faith; a gift that nothing can take away from us, a love that nothing can separate us from.

You might have noticed that we’ve now jumped ahead, from chapter 8 to chapter 12. The main reason for that is that in chapters 9-11 Paul speaks at length about the relationship between the Israelite – called by God to be the people of God, a nation for God – and the new, gentile, followers of Jesus Christ. Does the grace of God shown in Jesus somehow invalidate the call of God upon Abraham and his descendants? Is what we would call the Old Covenant replaced? Supplemented? Changed?

This was a really important question in the early days of the Church – it was their first big internal dispute – and chapters 9-11 of Romans are well worth reading for the way that Paul seeks to thread the needle: declaring the call of God on Israel eternally valid, while simultaneously holding that it is only in Jesus that the never failing grace of God is ultimately to be found.

But we’ve jumped over those chapters because interesting and informative though they are, they are to a considerable extent scratching where we don’t itch. Perhaps the one thing we ought to take from the chapters we’ve skipped is this: that Paul continues with the theme of grace. The grace of God in Jesus, he argues, is not at odds with God’s call through the Old Testament – indeed, God’s way with humanity has always been the way of grace. The call of Abraham, the giving of the law, the establishment of the Kingdom of David and Solomon – all these things too were acts of grace, God’s gifts to a people who did not deserve them.

So, whether one came into the faith of Jesus led by the law, or came directly through the gospel of Jesus Christ, it is all grace. And so, in the final few chapters of Romans, Paul moves on to some practical exhortations. And having addressed the great divide within the Church, between former Jew and former Gentile, he is is building towards an appeal to unity.

But he begins by making a different appeal – present yourselves, your bodies, as living sacrifices.

Of course, to both Jewish and Gentile religion of the day the idea of a living sacrifice was an oxymoron. The very nature of a sacrifice was that it was given over completely and destructively to God; killed on the altar, burned in the fire. The meat of a sacrifice was sometime entirely destroyed, other times it was turned into a meal for the priests, but the sacrifice itself was never living (at least, not by the end of the process).

A living sacrifice, therefore, is a deliberate contradiction; words used to challenge Paul’s readers ideas of what it was that God wanted of them. You yourselves are the sacrifice, he says, (for you are united with Jesus, who gave himself as sacrifice for all); but you are not given to the flames or to the knife – you are giving yourselves to God.

But the image of the sacrifice carries through – for a sacrifice was a complete giving over. One did not bring your sacrifice to a Temple and then expect to take it back. The sacrifice, once given, stayed given.

And so, Paul urges, give yourselves to God like that – for that giving of your body – your hands, your feet, your mind, your words, your energy, your talents – that is true spiritual worship.

Maybe you noticed here a reversal of some of the language Paul used in chapter 7, when he spoke of his ongoing struggles with the flesh, in which it looked almost like he was saying that the physical was bad and the spiritual good, that the body was just a temptation to draw the spirit away from worship.

But here Paul very strongly brings the two together again – your spiritual worship, he declares, consists in the presentation of yourselves, your real, physical, embodied selves, as a living sacrifice.

And it is holy, and it is acceptable to God.

This, Paul, says is the acceptable sacrifice – your very self. This is the thing that God will always accept – your gift of you.

The giving of yourself, of course, is a fundamentally individual act. There is only one body that you can offer as a living sacrifice; there is only one heart and mind and soul and strength that you are able to offer – your own. But from this act of spiritual worship Paul moves more or less directly into a declaration of our interdependence.

What a great phrase that is. It’s one of those things preachers and orators spend hours searching for, a single phrase that can carry so much meaning.

Individually we are members one of another.

Individually. Not collectively, not the Borg, not the uniformity of totalitarianism (of any flavour), but individually. As ourselves, our unique, characterful, wonderful, and awful selves. Not as clones of some great leader or (as those of us who have kids know) of our parents; but individually, bringing those things that make us, us, those quirks of character that inspire and frustrate.

Individually; as the unique people God made us, we are members one of another.

Individuals, but not individualistic.

Unique, but not alone.

Myself, but not for myself.

We are members one of another.

And as individuals who are together one body in Christ, we each have something to bring. We each have gifts that differ ‘according to the grace that has been given to us’ – a subtle reminder there, I think, from Paul that the gifts that we have to offer to the body of Christ are not of our making: the things that we have, we have by the gift of God.

They may be skills we have worked at, money that we have worked for, talents we have nurtured, but the seeds of all we have came from God, and the opportunities we have had to develop them are the gift of God, and even the life we have had to enjoy them is from God. The gifts we bring, whether they be of speaking the right words, or of knowing when to shut up and listen; whether they be skills of music or poetry or with the drill and hammer; whether they be gifts of time, of money, of practical resources – the gifts we bring we have according to the grace that has been given to us.

For this too is our living sacrifice, our act of spiritual worship.

Paul lived in a society that placed far more emphasis on the community than our focus on the individual – perhaps in this time of COVID one thing that we are learning is just how much we are all part of one another, just how much the decisions that we make and the actions that we take have an effect on everyone else.

We are followers of Jesus as individuals – we bring our own selves as our acts of spiritual worship, for we have no other selves to bring.

But we are also the body, together, in Christ. And as we are one body together, so we are part of one another.