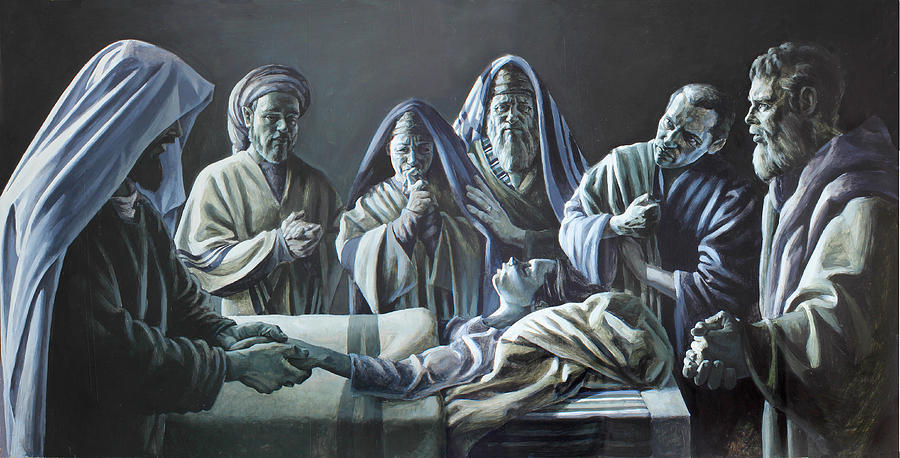 Today Mark’s gospel brings us two stories interwoven with one another. This is way of writing, a stylistic device that the author uses quite often, which seems to deliberately invite us to read the two each in the light of the other.

So what is it that we learn from the combination of stories which we don’t see in either of them on their own? It seems to me that we would benefit from looking at these two miracles side by side, to see how they are similar, how they differ, and what that might tell us.

But stories of two very different people. The two characters who come to Jesus seeking help could not be more different from one another (at least at this point in Jesus’ ministry, where he is interacting only with Jews).

Jairus, we are told, is one of the leaders in the synagogue. He is a respectable man, conventionally religious, married, with children, (or at least one child). And, of course, he is male. When it comes to assessing privilege within his society, Jairus ticks all of the boxes. No wonder the people who remembered this story, retold it, passed it on until such time as Mark came to write it down, knew his name.

By contrast, of course, with the anonymous woman in the crowd. In terms of social respectability, she had nothing: a woman, to start with, but also unclean (the bleeding of a haemorrhage would make that certain) and therefore excluded from public acts of worship and from most social events. She’s bankrupt from years of medical costs; possibly unmarried but more likely divorced – set aside due to her unclean state; an outsider with no influence or respectability. Remembered, even in this story, for the sort of person she was, not for herself, not named.

But the two have this in common: both have heard of Jesus, and both have concluded that this man might be solution to their very real problems; that he might represent the salvation they are searching for. And for both, to come to him; must overcome very real personal barriers.

Jairus must put his respectability on the line. As a leader of religion, he is supposed to be the one who knows, the one that other people turn to when they are in need of answers, in need of help, in need of God. He is used to being the teacher, the God-person in the room.

But now he has to humble himself; a leader of the synagogue going to an outsider; a pillar of society falling at the feet of Galilean nobody, an educated man seeking the advice of a carpenter’s son. But he does so – and not as even as an equal – one man of God seeking the help of a peer – but falling at Jesus’ feet and begging him, repeatedly. Because here Jairus is no longer the powerful, respectable, educated leader of men; here, Jairus is just a father whose little girl is dying – a man who has discovered exactly how little all those other things matter when placed next to the life of his child.

The anonymous woman has a quite different set of barriers to overcome. Ceremonially unclean, she is unwelcome wherever there are people, especially in anything resembling a religious setting. Certainly, to be in a great crowd was not acceptable. A crowd pressing in, people pushed together, jostling; this was context she had probably avoided for the past twelve years. Most likely she went incognito; for she would know that if she were recognised, she would be shunned, perhaps even met with violence, for daring to bring her uncleanliness amongst the clean.

She has to overcome the hostility of those who would not want her there, as well as her own internalised version of that rejection. For it is not possible to be excluded from society for twelve years without some part of you coming to believe the exclusion must be justified.

But she comes. Because she has already tried every option that society told her was ok; she has gone to the doctors, and they have taken her money and left her no better; indeed, we are told, they have left her worse than she was before.

And yet even with that courage, she doesn’t go to Jesus. At least, not to face him; not even on her knees at his feet does she dare to believe that she would be welcome. All she can bring herself to do is to touch his cloak.

Jairus had to humble himself to come to Jesus for help; this woman had to do the opposite. She had to believe she was worth enough to have the right to seek his help. Jairus’ approach was very public; hers secretive. Jairus begged, she didn’t even speak.

Two people seeking Jesus out; two people who stand at opposite ends of the social spectrum, who could not be more different, who overcome very different barriers in order to seek his help.

But the story ends the same for both of them.

Both are given a gift of life.

Jairus receives back the life of his daughter; and with it all the hopes and dreams that had been shattered; all the possibilities of a future for her, for the family.

And the anonymous woman receives back her health, and with it, her life as part of society: now she can be declared clean, she can be part of life once more; perhaps, depending on her age, she might even dream once more of a family.

But her story is not yet complete. For there is a detail in the story that I had never noticed. When Jesus asks, “who touched me?”, the disciples can’t believe the question, but she understands and comes to face him; but she comes “in fear and trembling”, and unconsciously imitates Jairus; she falls at his feet.

She has sought Jesus out, she has received the healing she hoped for; but now she has been found out, and she is terrified. She’s not rejoicing, or full of gratitude; when Jesus calls her, she comes in fear and trembling, frightened that she will be punished for daring to approach Jesus, daring to touch him.

Everything in her life in the past twelve years has taught her that she is not worthy; that she is unclean; that she has no right to even hope for help.

Her healing is not yet complete. She has been healed in her body; but Jesus knows that that is not the end of the story.

And so, he says just a few more words to her.

“Daughter,” he names her; the same word that Jairus had used of his little girl, the one he loved so much he would do anything in the hope of saving her; Jesus uses the same word to name this woman.

“Daughter, your faith has healed you,” your faith, he says, as if to say, this healing is yours, it belongs to you. Because whatever life has told you these past twelve years, you are worthy.

“Go in peace,” you need not fear that your presumption will bring consequences upon you, “and be healed”; this will not be taken from you.

And now she has truly been healed.

So where in all this is, for us, Good News worth sharing? I think we struggle with the healing narratives, for they don’t seem to be reflected in our lives. We don’t see lots of miraculous healings, not at least in the way that they are portrayed in the gospels.

But it seems to me that the interweaving of these two stories has something to say that is Good News to hear, good news to share, in our divided age.

Jairus had to set aside his privilege, the woman her exclusion, but when they did so they encountered Jesus just as people, and that is where he met them.