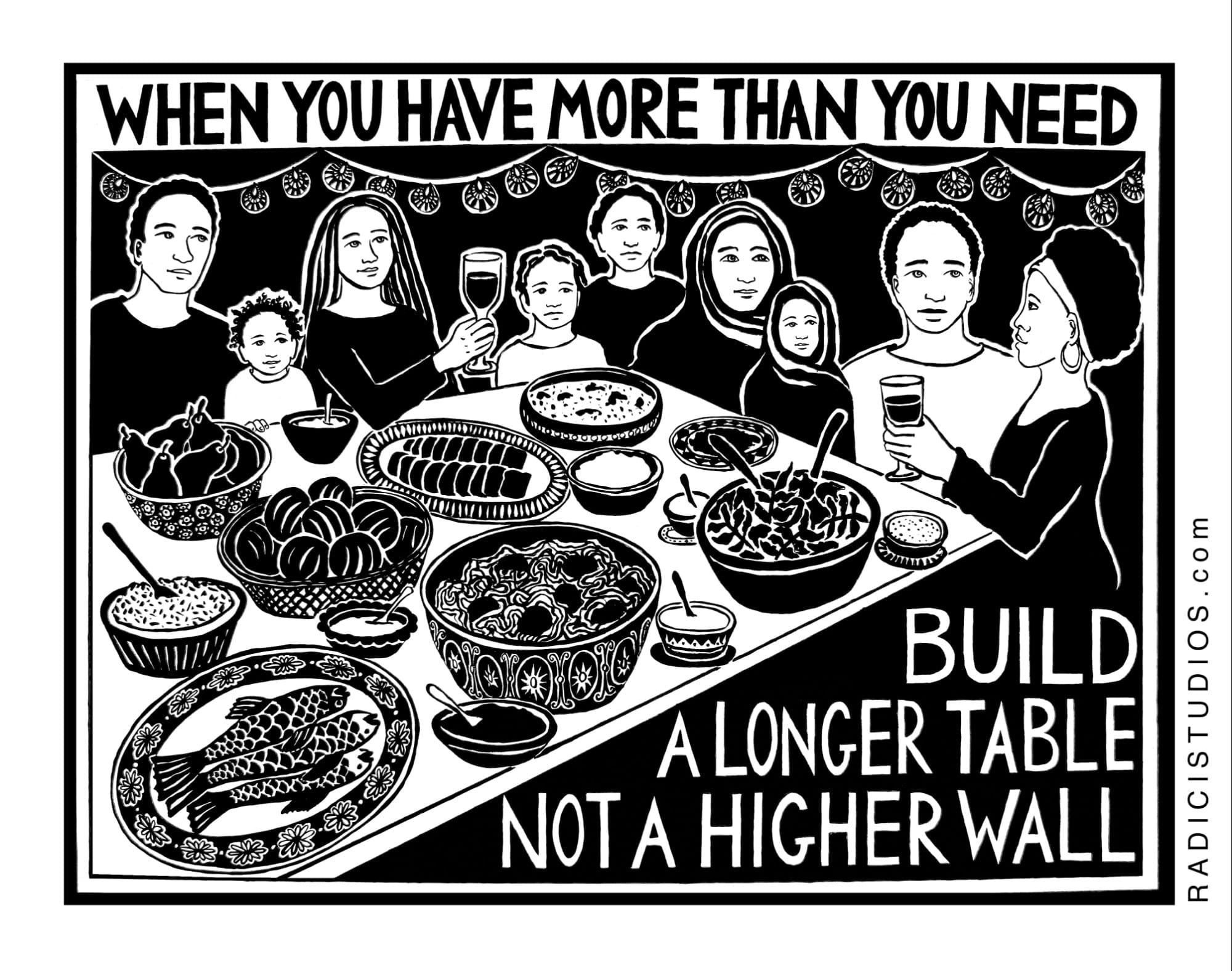 I guess if you were to make a list of adjectives that you would apply to Jesus, “racist” probably wouldn’t be amongst them. And yet here he is, in Mark’s gospel, meeting with a gentile, a Syrophoenician woman, in desperate need of help for her afflicted daughter, and basically calling her a dog – by contrast with the Jews, Jesus’ people, who are the children.

And we can try to dress it up, talk it away – I’m always fascinated to hear how take the Bible most literally tie themselves in knots trying to explain how Jesus was testing the woman, or perhaps making a joke with her, or how he knew what she would say and was just using the opportunity to teach a lesson to the disciples.

Anything to avoid the simple reading of the text: that Jesus, at this point in his story, didn’t think that gentiles were as important to God as the people of Israel.

That in this encounter Jesus was challenged to rethink his assumptions about what God had called him to do.

The gospel writer – who goes to great pains in his gospel to demonstrate that the Kingdom that Jesus came to declare was for all, Jew and Gentile alike, has no difficulty in sharing this story with his readers. Mark, it seems, wasn’t embarrassed about the fact that Jesus, at this point in his ministry, needed to learn something from a Samaritan woman.

Do we find that hard to accept? That Jesus needed to learn something? Have we forgotten the core truth of the incarnation – that God became a person, with all the limitations of humanity that go with that?

So let’s rewind a little, and see how we came to be where we are….

Up until this point in Jesus’ ministry, he’s been working amongst the Jews. He came out of the desert (in Mark chapter one) and began his ministry in Galilee.

He’s had one short foray in Gentile territory – he crossed the lake to the region of the Gerasene people. The text suggests that he wasn’t actually heading there as a sort of mission, more a retreat, a chance to get away from the crowds. And maybe you remember that story, it’s the one where the legion of demons is cast out of a madman and into a herd of pigs, who promptly drown in the lake, much to the distress of the locals, especially, presumably, the owners of the pigs (not to mention the pigs themselves)

And when the madman, now sane, wishes to follow Jesus, Jesus refuses to allow it – sends him off to his own people instead. And the people of the region beg Jesus to leave – to go back to the place he came from.

It’s not exactly a sort of “welcome to your ministry amongst the gentiles”. Nothing there to suggest to Jesus that the people outside of Israel would welcome him and his good news of the Kingdom.

After that, Jesus returns to work amongst the people of Israel. And then we come to the start of Mark chapter 7, when Jesus starts to get into arguments with the teachers of the Law – he heals many people, but the Pharisees have a go at him because his disciples don’t wash their hands in the prescribed way before eating. The first half of Mark 7 is really Jesus ranting against their petty-minded reading of the law, condemning the scribes and Pharisees for keeping the letter but disregarding the spirit – and at the same time, declared all foods clean; fundamentally breaking, denying, one of the pillars of Judaism.

There’s more than a hint here that Jesus is starting to be disillusioned with the understanding of God that the religious leaders of his people were offering. That, though the people are listening to him and following him, his words aren’t getting through.

And then we get to today’s text:

Tyre was 30 miles away from the sea of Galilee. So that’s a couple of days, maybe three days, of walking. And it’s far enough away to really change the character of the place. Because Tyre is on the Mediterranean coast, it’s a port town, and as such it’s a much more cosmopolitan place than Galilee – by this time it was the capital of the Roman province of Syria-Phonecia. A good place to go if you were trying to get away from the Jewish authorities who held little sway in this region. A step out into the wide world, out of the provinces and into the relative anonymity of the big city.

But even there, Jesus could not escape notice. His reputation was bigger than that, and a gentile woman came to seek his help. And her faith gets him. For though his first response is exactly what you might expect of a Jewish Rabbi, a man from Galilee born and bred, a student of the law of Moses passionately committed to calling his people back to the worship of the one true God; his first reaction, to turn away the foreigner, the woman who is not from the people of God, that reaction has just enough of a question in it, just enough uncertainty to open the door to her faith.

Let the children be fed first, he says, it isn’t right to give the children’s food to the dogs.

He doesn’t, as a Rabbi of his day might have, declare that there is nothing from God for the Gentiles; instead, “let the children be fed first”

OK, she replies, but don’t even the dogs get to eat something? Even if it’s just the crumbs that fall from the table?

And it clicks into place. The children of Israel have rejected his words, cast the bread of life aside; the religious leaders of his people have proved themselves to be caught up in the minutia of technical obedience to the letter of the law; and the dogs of the gentiles have come to eat the feast that the children have cast aside.

And I don’t think it’s any coincidence that Jesus’ rethinking of his call comes not through argument, not through study, not even through prayer, but through an encounter with human need.

Because the fundamental driver of everything Jesus was about was incarnating, making real, the love of God; and when love encounters a person in need; a parent, here, desperate for her sick child, arguments and theories take a back seat.

Jesus’ first response expressed a limitation that reflected something basic in the understanding of God of the people of his day, the people he had grown up amongst, the people he was part of.

But his second, deeper, instinct was to respond to need with love.

And the thing is, despite the sort of stereotypical understanding the old testament as portraying a provincial God of wrath and anger, by contrast to the New Testament God of universal love and fellowship, this revelation, this insight that Jesus seems to get in the face of the Syrophoenician woman whose little daughter was sick, was already there in the law and the prophets, in the wisdom of the people of Israel. We read it today in the psalms:

The Lord watches over the strangers;

Upholds the widows and the orphans.

There’s no question but that God, as portrayed in the understanding of the authors of the Old Testament, favoured one people over another, but as I’ve often noted before, there is also a counter-current within Old Testament law and (especially) the prophets; a voice which insists that God is the God of all, not just of us.

It’s definitely a deep-seated human instinct to divide the world into an us and a them; our tribe and the outsiders. In these more technologically and socially complex times we might have different borders in different contexts, but there is always a border.

And one of the effects of stress and times of hardship (and I think we can all admit we’re in such a time at the moment) is that we tend to pull those borders in closer, to shrink the circle of “us”. It makes sense – when times are tough, we feel we can’t look out for so many others, we don’t have enough; and we narrow our horizons.

It’s part of the ‘myth of scarcity’ that I spoke about a few weeks ago; that there isn’t enough – enough food, enough time, enough money, enough – for everyone, so we need to compete, to look out for the needs of those close enough to us.

But this encounter between Jesus and the Syrophoenician woman remind us that the grace of God is not a limited resource; even the crumbs that fall from the table are a feast for the dogs.

And when we realise there is enough, we have the choice to enlarge our circle. We don’t have to, of course; one response to knowing that we have more than enough is to build higher walls, to keep out those ‘outsiders’, to make sure that we have enough not just for today, but tomorrow, next week, next year.

Or, instead of building higher walls, if we have, in the grace of God, enough, we can allow our horizons to expand, we can see those on the outside as people like us.

Instead of a higher wall, we can build a bigger table. It’s what Jesus did when he met an outsider who needed what he had to offer. Rethinking outsiders.