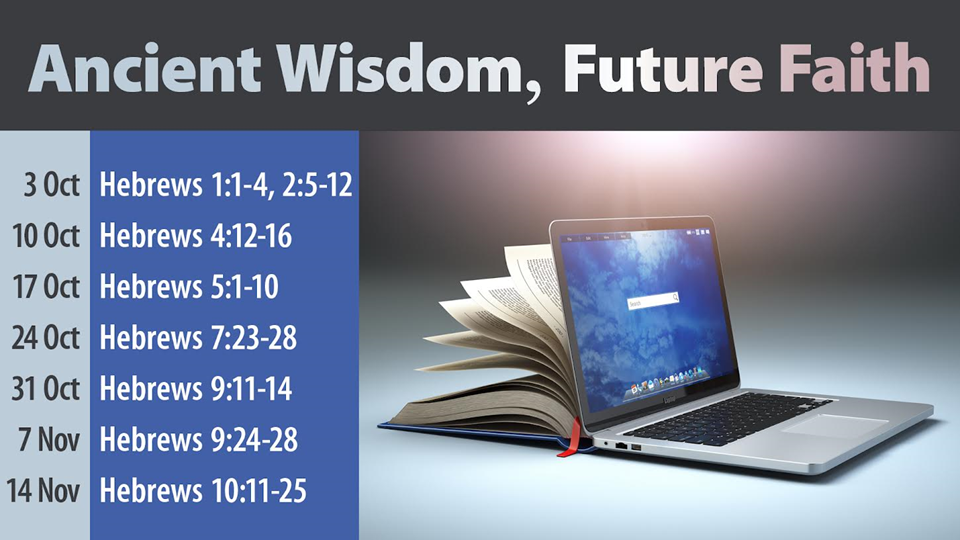 So this week we start a new series, which is going to take us through October and November, basically up until advent, looking into some parts of the book of Hebrews.

Hebrews is, in many ways, one of the more mysterious books of the New Testament. In common with the majority of books, we don’t know the author – but in the case of the book of Hebrews there really aren’t even any educated guesses. In the third century Origen wrote “If I were asked my personal opinion, I would say that the matter is the Apostle’s but the phraseology and construction are those of someone who remembered the Apostle’s teaching and wrote his own interpretation of what his master had said”, and that still seems to be the best wisdom to be had on the matter.

We also have no idea of the circumstances that gave rise to the letter being written. The bulk of the letter may well have originally been a sermon; but when and where it was preached is lost to history.

Because the letter refers to the Temple without knowledge of it’s destruction in 70AD, it’s normally thought to have been written in the mid 60’s. Again, we know little more than that.

What we do know with a great deal of confidence is that the audience of the letter were mostly Jewish Christians. The letter (like Matthew’s gospel, and the book of Revelation, and unlike most of the rest of the New Testament) is absolutely packed with images and references and allusions to the Hebrew scriptures and traditions in a way that would have made little or no sense to Gentile converts.

Which might lead one to ask what it has for us; for none of us have grown up immersed in the faith of Second Temple Judaism as these first readers had; none of us naturally get all of the cultural references, or know the nuances of first century debate around the meanings of the Hebrew scriptures.

So why would we – 21st century Gentiles – read this letter?

Well, there are lots of reasons. But the one I think we’re going to focus on in the coming weeks is this: that in some ways we are in the same situation as those first century Jewish followers of Jesus.

What do I mean?

Well, it seems to me that the basic question being faced by the first century Jewish Christians was this: how do we hold this new thing, this new insight into the way of God, and at the same time retain the wisdom and the revelation of God that is embedded in the tradition of the generations who have gone before us?

The people of Israel who had come to faith in Jesus had a rich tradition in the law, in the prophets, in their very culture, a tradition that honoured God, that knew what it meant to be the people of God.

And now there was a new revelation, a new insight, in the person of Jesus.

How were they to embrace this change, this new and incredible truth of the love and grace of God revealed in the person of Jesus, while at the same time remaining true to the values that have shaped our history?

How do we value ancient wisdom in a future faith?

And that is surely a question that resonates with us in our changing times. We know that everything around us is changing; we know that the Church, too is – or rather, must, change.

But how do we embrace what is new in a digital world, a post-covid, post-Western future, while holding onto what has gone before, the faith that has brought us this far?

For in the very opening words of the this letter the author declares to his readers that both what has gone before and what has just emerged are of value, of God:

Long ago God spoke to our ancestors in many and various ways by the prophets, but in these last days he has spoken to us by a Son

Both the tradition of the people of Israel and the incarnation of Jesus are named as God speaking to God’s people. As Jesus himself said,

Therefore every teacher of the law who has become a disciple in the kingdom of heaven is like the owner of a house who brings out of his storeroom new treasures as well as old.

New treasures as well as old.

A number of years ago, shortly after I had attended my first national assembly meeting, someone in the Wahroonga congregation asked me whether, having seen the national Church at work, I believed that the Uniting Church had a future.

And I remember being quite struck, not so much by the question as by the clarity with which I knew my answer – the same answer that I would still give today a decade later. “Yes. It certainly does. I don’t know whether or not we will recognise it, though. But I’m confident that God will.”

I had then, and still have now, this sense that so much of what we think of as Church, of being the Church of Jesus Christ, as we experienced it in the late 20th and early 21st century, is actually a layer of expression of the faith that is wrapped around the core. Like a mandarin – what we see is the skin, but what really matters is the flesh that lies within. Much of what we identify as Church is not the core of our faith, but a particular expression of it.

We know that’s true, because we see people worshipping God in Churches around the world which look enormously different to the way we do things. Even within our own community, a high Catholic mass doesn’t look even a little bit like a mega-Church worship service, but we can recognise them both as expressions of faith in Jesus. Not that there aren’t differences, but we can see that somehow they share a core.

Much of what we recognise, whether our worship be contemporary, traditional, charismatic, meditative, or some mixture or something else entirely, is the skin, the expression of the faith. Not the faith itself.

And that’s not a criticism. It’s actually exactly how it ought to be. The core of our faith, following Jesus Christ as participants in the Reign of God, has to be expressed in each time and place. In a sense, it’s the incarnation.

In Jesus, God took human form in the particular: a male, of Semitic ethnicity, Aramaic speaking, and so on – but none of that was what made him God. Surely God could just as easily be incarnate as an indigenous Australian woman. We do not worship Jesus because he was a Jewish man, but because he was God.

And that’s what the author of the book of Hebrews was leading his (or her) readers through: in the past God has spoken to us in many ways, through many prophets, many expressions of faith in the one true God each of which made sense in a time and a place, and each of which represented a way of being in the world, a way of worshipping: but now we have seen something new. Now we have seen Jesus.

The core. The reflection of God’s glory and the imprint of God’s very being, who sustains all things by his powerful word, who made purification for sins, who sat down at the right hand of the Majesty on high.

In these words we see the two most important things we need to know about the letter to the Hebrews: firstly, it’s all about Jesus, and secondly, it’s written to make sense in the culture of first century Judaism. We wouldn’t lead with “he made purification for sins”. That’s a very Hebraic way of talking about the saving work of Jesus. Words that made sense in a context.

That’s the expression of faith. The skin of the mandarin. We’d say it, think about it, differently.

And that’s ok. In fact, that’s the point. The challenge. How do we take this ancient wisdom and express it in future faith?

How will we change the expression of our faith in order to carry the core into the future, as generations before us have done?

How will the post-COVID church look different to what we knew before? Not because we don’t value the traditions that formed us, but precisely because we do: we value what lay beneath those traditions, what breathed life and fire and energy and meaning into them. And we want those things to make sense in new world.

I believe that’s the question Hebrews invites us into. What will a future faith be, if it is energised by ancient wisdom and incarnate in our times?

What will the Church look like when it’s leadership grew up knowing that being gay or transgender is no more controversial – and no more a barrier to deep and genuine faith – than being right-handed?

What will the Church look like in a generations time when the earth has warmed by 2 degrees and extreme weather catastrophes are commonplace?

What will the Church look like in the social and political environment of the mid and late 21st century, the shape of which we can only begin to guess at?

How will the generation who grow up as digital natives lead the Church?

We – especially those of us with a few more years behind us – might not recognise it.

But I believe God will.