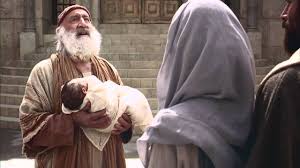 Presented as a baby

So today we begin a short series entitled “Jesus Introduced”. Over the coming weeks we’ll be looking at the way Jesus re-introduced himself to the people of his hometown (something we explored last week), how he connected with his first disciples, how he introduced some of the central themes of his teaching, and how he was introduced as “the beloved son” in the transfiguration.

But this week we begin with the story of his introduction to the temple as a baby.

Of course, this isn’t really the first introduction of Jesus: that’s probably the angel Gabriel’s visit to Mary to announce her pregnancy; or at his birth, the visit of the shepherds to his bedside. But the presentation at the Temple was a very significant moment in the life of every newborn Jewish child.

It’s a story we often don’t hear in Churches that follow the lectionary, because it has its own special day, February 2nd, 40 days after Christmas, which, of course, isn’t normally a Sunday. The period of 40 days was the time for which a woman and her newborn child were required by the law to remain at home after the birth of a boy. But realistically it is unlikely that Jesus was actually presented at the Temple on day 40 – for a family not living in Jerusalem it might have been some months before travel was both safe and practical.

But certainly, Mary and Joseph, being observant, faithful Jews, would have made it a priority to bring their newborn son to the Temple, to present an offering of thanksgiving for the safe birth of the child and the safety of the mother in childbirth, and to celebrate with their people, their community of faith, the new life that God had blessed them with. In many ways, it was a ritual not unlike the baptism we celebrated last Sunday.

But for the author of Luke’s gospel (and it is only in Luke that the story is recorded), the presentation of Jesus in the temple, a couple of months old, was more than the celebration of a precious new life. It was the first public declaration of the themes already declared in chapter one, in the Magnificat and Zechariah’s prophecy, that we explored in Advent.

For Simeon, who had been waiting faithfully for the salvation God had promised the people, and who had been blessed by the Holy Spirit with a confidence that he would see the one he waited for; Simeon was led by God – who knows how – to be at the Temple that day, and he saw this babe in arms, and he knew.

my eyes have seen your salvation,

which you have prepared

in the presence of all peoples,

a light for revelation to the Gentiles

and for glory to your people Israel

Right here, when the baby is just weeks or months old, we see Simeon linking him into the expectations of his people. But not the expectations that the people held for the Messiah – the one who would save Israel – Simeon goes back further into their history, deeper into the Hebrew faith, and declares that this child is not just for the people of Israel. There’s an echo in his words of the call of Abram (who would become Abraham, the father of the nation) – God’s promise to Abram that “in you all the families of the earth shall be blessed”

It’s a distinctive characteristic of Luke’s gospel – there in the others but emphasised in Luke – that Jesus came not just to be the Messiah of the Jews, but the light and salvation of the world. Jesus was, in Simeon’s terms, not just for us, but also for them.

Indeed, when it comes to the people of Israel, Simeon warns that the arrival of the awaited Messiah will not be a simple good: for…

This child is destined for the falling and the rising of many in Israel, and to be a sign that will be opposed so that the inner thoughts of many will be revealed

There’s more than a hint here that the life and ministry of Jesus will not simply be about the people of Israel being set free from Rome, restored as a nation; but that it will also be a judgement. That when the message of Jesus appears some will choose to oppose it, will choose to stand against the declaration of the reign of God that he will proclaim.

And, of course, it would be so. Many who held power, influence, authority, especially those who held them through their positions in the religious hierarchy, would oppose Jesus’ declaration of the love and grace and open welcome of God. Many would be offended by his open welcome of women, of lepers, of prostitutes and tax collectors, of Samaritans and gentiles. And by their opposition, they would be seen for what they are.

Some parts of the Christian Church seem to love the language of God’s judgement – always, you might notice, declared upon groups that they disapprove of. But in the gospels there is a very strong sense that judgement is something you do to yourself: that when the Good News of the Reign of God is declared, you can get on board, or you can fight it. As Jesus said to Nicodemus, “And this is the judgement, that the light has come into the world, and people loved darkness rather than light”

In his few words, Simeon declares that the baby Jesus is not just the Messiah of the Jews, and the light of all the nations, but that he will also bring people to a point of crisis, of decision: when they hear what he has to say about the love of God, and when they hear his challenge to live as if the Reign of God was a reality, will they join the movement, or walk away?

But Simeon was not the only one to recognise Jesus in the Temple that day.

The other was a woman by the name of Anna. And, as sadly is so often the case of the voices of women in the scripture – and so often still today – her words were not recorded.

But what we do hear is that, having seen Jesus, she began “to speak about the child to all who were looking for the redemption of Jerusalem”. Anna was the first person in the gospel to start to tell others about Jesus. The first evangelist, if you like.

And, characteristically, she is not one of the usual suspects. She’s a woman; she’s been a widow for decades having lost her husband young; probably childless given that she is living in the Temple – not at all someone who would be seen as blessed by God. But a woman who, despite the tragedies that life had thrown at her, despite the fact that she would have been seen as an object of pity, someone upon whom charitable acts might be bestowed, had carved out a place for herself, a role in the Temple; identified as a prophet – one who has drawn near to God, and God has drawn near to them, and who knows the things of God, knows what it important to God.

The first public introduction of Jesus to the world was a strange blend of the traditions of his people – coming to the Temple, bringing the offering – and a radically new vision of what his arrival, as Messiah, was going to mean.

It would be 30 years before Jesus’ public ministry would begin. Simeon and Anna would be long dead. But I wonder how many people remembered Anna’s words to them, “speaking about the child”, when they encountered the man? Some, at least, must have remembered for the story to have been preserved.

And how many had the seeds of what “Messiah” might mean planted by reports of what Simeon said about him?

We, of course, will never know. But what we do know is that right back at the start, those who were closest to God – Simeon and Anna, like Zechariah and Mary before them – recognised that this Messiah was going challenge expectation, upset the religious, and call people to a radical discipleship that would change their lives and change the world.