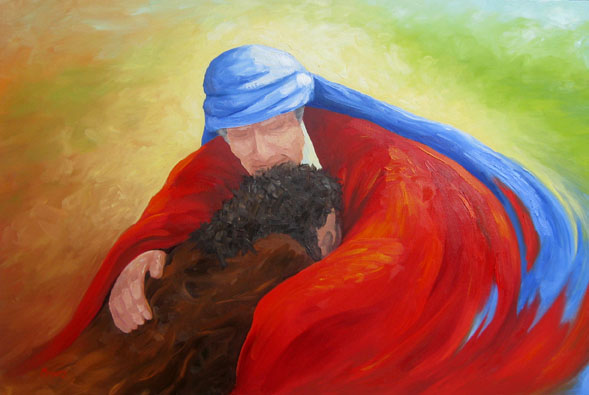 Welcoming when we return

What is there to say about the story of the Prodigal Son that has not been said a thousand times before?

One of the two best known of Jesus’ parables – I reckon it’s probably just nudged out of the top spot by the story of the Good Samaritan – it, like the Good Samaritan, has entered the language. So much so, in fact, that it’s changed the meaning of the word prodigal – though still defined in most dictionaries as meaning “characterized by profuse or wasteful expenditure” (Merriam-Webster), I’d suggest it is far more often used today in the second meaning the dictionary offers: “one who has returned after an absence”.

And I’d suggest that that latter meaning is also a better description of the parable. For the wastefulness of the son is really not the point: it serves to emphasise that the troubles he has are entirely of his own making, but the main point of the parable is surely found in the narrative of his return.

It’s a story that’s frequently used in an evangelistic setting, of course. Because it has all of the elements: the prodigal son recognising that he, through his own choices, has walked away from God; then coming to the realisation that life according to his own sinful desires, great though it seemed for a while, turns out to be empty compared to even the life of a servant in the family home he had rejected; the humility of his return, claiming to rights or status but asking for a lowly place; the father waiting, watching, longing for his return; and the joyous celebration over this son, once dead, now alive again.

I’m sure you’ve heard the story used in that way. And fair enough. That’s all there in the story, and it is, surely, a fair way of reading it.

But – and I suspect there’s a good chance you’ve heard this before, as well – in its context and in its entirety, the story seems to have a rather different central theme.

For the parable is set as one of three responses given by Jesus to a complaint that we read in Luke 15:1

Now all the tax-collectors and sinners were coming near to listen to him. And the Pharisees and the scribes were grumbling and saying, ‘This fellow welcomes sinners and eats with them.’

In response to this complaint, this grumble from the religious folk of his day, Jesus first tells two short parables about lost things being found – the lost sheep, and the lost coin. Both have the same form: something is lost; the one who has lost it searches for it; and there is celebration when the lost is found.

So far, so good. For surely, no-one would complain about the idea of there being a celebration when something – or someone – lost, was found?

But the parable of the lost son adds a very pointed twist to the end of the story. The bit that we often leave out in our retelling of the tale. The bit about the other brother.

And so instead of being a simple story of people who rejoice when what was lost is found, it becomes a comparison, a contrast. It sets the way that God responds to us against the way that we, humanity, all too often respond to one another.

So just like last week, with the parable of the unproductive fig tree, we are today offered two perspectives. In this case those of the father, and the older brother.

And again, like the fig tree, one of those perspectives is depressingly familiar. Not just in the world, but even within the Church.

Which is, in a sense, not surprising. For Jesus’ description of the behaviour of the older brother was, pretty clearly, aimed directly (and, to be honest, not all that subtly) at the religious people – and especially the religious leaders – of his time.

The older brother, who refuses to celebrate the return of his wayward sibling. Who would rather stay out in the fields and nurse his anger – even when his father comes out and pleads with him – than join in the party.

Well, the reason given by the Pharisees – and by the older brother – is clear enough. The younger brother is a sinner. While the older brother has done the hard work of obedience over many years, this one has been out wasting his fortune, wasting his opportunities, living it up with no regard for the future, or even for the standards of the present.

But the answer can’t quite have been that simple, at least not for those religious leaders. For they would have been ready to admit, if asked, that they too fell short of God’s holy standards. “Let he who is without sin,” Jesus challenged them elsewhen, “cast the first stone” – and they all stepped away. So their annoyance with Jesus for eating with “sinners” isn’t quite so simple.

And so it is with the older brother. Dig a little into his response, and it shows a sense of dessert. He, the good one, the responsible one, the faithful one, he deserves better. He was always there, and he didn’t get a party. Perhaps it would be ok for the returning younger brother to be celebrated, as long as the faithful older one was celebrated more.

And honestly, that seems fair. It doesn’t seem right for the faithful ones to get less recognition than the returning wastrel. We surely, if we are honest, find in ourselves more than a little sympathy for the older brother. Perhaps, if we are honest enough, we also even see a little of ourselves in him; we who have been faithful members of God’s church for decades but sometimes feel as if we never quite got the celebration offered to the newcomer.

And yet we also love the story of the younger son, and the welcome that he finds. Because, as the wizard sings in the musical Wicked:

So I don’t see in the story a condemnation of that older brother, or of the religious folk he represents. Instead it seems to me that Jesus is appealing to that instinct in them that recognises the beauty of the Father’s response.

I’d really like to think – with no justification, I admit, except perhaps a basic belief in the fundamental goodness of some of those religious folk who were so disturbed by Jesus spending time with the disreputable, with the sinners – I’d like to think that some of those who heard the story recognised the God that they knew in the father, and maybe even saw themselves in the older brother, and rather than getting angry, got reflective.

Because that, surely, was the point. Surely Jesus didn’t tell this story – pointedly against those of the religious folk who criticised him – to anger them. Surely, instead, this was his way of judgement: bringing light and truth which invited even his opponents to rediscover the more generous face of God that somewhere within them they knew. We know, from history, that there were Pharisees amongst the early Church, after all.

So whether we see ourselves in the younger brother, the older brother, or in the other members of the household never named in the story, or, most likely, in a mixture – wherever you find yourself in this story (except, perhaps, for the fatted calf, for whom there really isn’t a good way to look at the story) – maybe it is really an invitation to remember something that we already know and deeply value about God.

In fact, if we want to apply the word, in its original meaning, to this story, perhaps we ought to name it “the prodigal father”.

For the picture that Jesus paints of God’s celebration is prodigal – profuse and wasteful. The returning son would have been happy for a job as a servant, delighted beyond measure to be reinstated to the family.

But the father goes beyond. Far beyond, foolishly beyond. Prodigally beyond. That is the picture of the welcome of God that Jesus invites us to celebrate – when it’s offered to us, and when it is extended to others, even those we might consider unworthy.

When I was writing these reflections I saw just the title of a video Ellie Elia (who I know many here will remember) had recorded for her Church – Ellie’s in isolation at the moment, with a COVID positive child.

I’d like to just leave you with that title. Because Ellie’s talk was simply named: