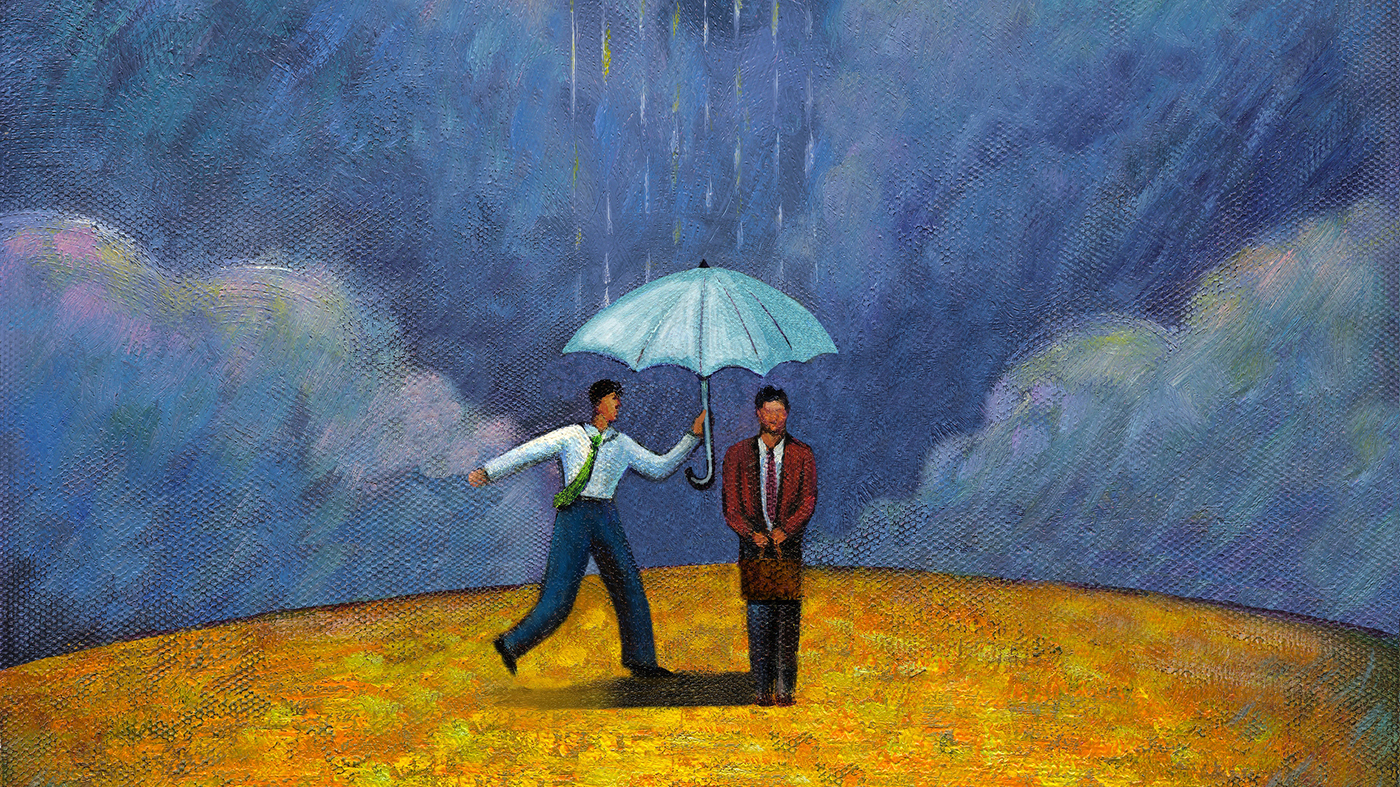 One of the things I often do when I’m preparing to talk about a passage, writing a sermon, is to go back to a big excel spreadsheet that I’ve got which lists every sermon I’ve ever preached – the Bible passages, the title, and a one-line summary. This isn’t because I’m trying to find an old sermon that I can reuse (although I’m not going to say that never happens), or even to look for ideas worth reusing, but just to get my mind started. I’ve heard it said that if you have writers’ block one thing to do is just write anything – even if it is absolutely rubbish – to get yourself going.

I start most weeks with a sort of “thinkers’ block”, and I just need to think anything to get going. So I look back at what I’ve thought in the past.

And it turns out that I have never spoken on this story from the book of Acts. Either this telling, in Acts 11, where Peter recounts the events, or the telling in the previous chapter, where they actually happened.

And that creates an interesting contrast. This story was so important to the author of the book of Acts that they chose to include it twice. Read Acts 10 and then Acts 11. Peter’s encounter with Cornelius happens, and then he tells the story of it happening. To paraphrase the song – a story so good they told it twice.

But I’ve never spoken about it.

So I started to wonder why.

And the answer is both simple, and misguided.

The simple answer is that this story was important at the time of the writing of the book of Acts (probably late in the first century, although some scholars – and I tend to agree – place it as early as the mid 60s) because it addressed a question, a controversy, that was critical to the life of the movement of the followers of Jesus at that time, but that it is a question that was resolved, and that we simply take it for granted.

That question, of course, that controversy, was the inclusion of gentiles amongst the early Church. I mentioned this last week – before this point in the growth of the Church it was still an almost exclusively Jewish movement. A reformation, if you like, within Judaism. Calling the people of Israel back to their faith, back to their God.

The events told in the story today changed that: within a few decades the Church would become majority gentile. But the arguments would rumble on (though over the years they would shift from “can gentiles be included” to “do gentiles have to obey the law of circumcision and the food laws”), and were clearly still alive when the author of Acts wrote these words. Twice. So that no-one could miss the point.

That gentiles were included. That it was Peter (highly respected, very Jewish, Peter) who had been the one to say so. Not Paul. Though Paul was the one preaching to the Gentiles, he was not universally respected amongst the Jewish Church (he had, after all, started out trying to kill them). It was important in the politics of the early Church that it was Peter who had first established that the gospel was for the Gentiles, and that Paul was following that lead.

Of course, what was really important was not whether this was a decision of Peter or of Paul – but that it was the leadership of God. At its best, this has always been the way of the Church. Seeking in its decision making, through all the reflection and listening and debate, to know where God is calling us.

So Peter’s telling of the story is full of indications that this whole thing was God at work, God’s idea. It begins with a vision, a dream, challenging Peter to reconsider what it means for something to be clean or unclean; three times he sees the vison, concluding with the words “what God has made clean, you must not call profane”.

A dream might just be a dream – but at that moment visitors from a gentile arrive, and Peter feels the guidance of the Spirit: “do not make a distinction between them and us”.

Cornelius, when Peter arrives, adds more evidence: he too has had a vision, a dream, with inexplicable details – to send to Joppa, for Simon, called Peter.

And then, as Peter begins to speak, the Spirit of God falls on them all – in Peter’s words “just as it had upon us at the beginning”.

Everything lines up to drive home the one point: “do not make a distinction between them and us”. And the matter is decided. God had spoken. The gentiles were in.

A hugely important story for the early Church. Important enough to tell it twice. But as I mentioned near the start, it’s a story playing into debate which is over. For almost two thousand years it has been universally accepted within the Church that the gospel is for all nations.

Which is the easy, but inadequate reason that I’ve never spoken on this passage.

Why inadequate? Because, of course, this story has at its heart a declaration about the gospel that we always need to be reminded of. It’s expressed in different ways: Peter says to Cornelius (in Acts 10) “God has shown me that I should not call anyone profane or unclean”. The Spirit of God told Peter “not to make a distinction between them and us”. And, of course, in the vision, the voice declared “what God has made clean, you must not call profane”.

And the thing is – the thing we can easily forget – is this: when Peter, in the dream, refused to eat unclean food, he was right. When he declared that he should not go to a Gentile house, he was right. When the other believers, back in Jerusalem, heard what he had done and criticised him for it, they were right.

Peter said to Cornelius “God has shown me that I should not call anyone profane or unclean”, but his scriptures, his Bible, our Old Testament, again and again declares people to be profane or unclean. The Spirit of God told Peter “not to make a distinction between them and us”, but the scriptures frequently demanded a distinction, condemning the people of Israel for mixing with foreigners. The voice declared “what God has made clean, you must not call profane”, conveniently skating over the fact that it was the law God gave that declared these things unclean in the first place.

In a simple theological debate between Peter and those who criticised him, Peter did not have a leg to stand on. The Bible was clear. He was in the wrong for welcoming “those people”.

And maybe that’s a story that we recognise. A story that feels more contemporary, that comes a little closer to home. We in the Uniting Church are certainly used to getting a fair whack of criticism from some parts of society for our position on welcoming of refugees, or that the welcome we offer to migrant communities should not depend on them becoming like us, or even that indigenous Australians should feel welcome on the land we, second peoples, took from them.

And then, of course, there’s the religious criticism, for welcoming the wrong people into the community of God’s people? That’s something I recognise. I doubt a week goes by without someone telling me that the Uniting Church in general, or Roseville in particular, isn’t Christian, because of the welcome we extend to those in same-sex relationships, or, more recently, to those who are transgender or non-binary. Not long ago we had a rather odd “Christian preacher” out front who appeared to be performing an exorcism on our LED signboard for, I assume, the sin of declaring “everyone is welcome”.

These religious criticisms often come with a barrage of Biblical texts supposed to prove that the critic is “right” in their condemnation. Now generally speaking those texts do no such thing – I’m happy to go toe to toe anyone to argue the Biblical case for LGBTIQ inclusion – but even if they did, I would remind myself of this: Peter’s critics were right about what their Bible said.

A number of years ago one of my kids was reading the excellent book “Wonder” at school. Great book, very quotable. And probably the most famous quote in it was this: “When given the choice between being right or being kind, choose kind.”

Now you can criticise that aphorism in all sorts of ways. It doesn’t stand up too well in terms of logical ethical rigour. But I think the criticism misses the point. That however much you might think or believe that you are right, you might not be. And the witness of the life of Jesus seems to me to give a lot of credence to that. That if being “right” about what God wants leads to people getting excluded, people getting hurt – especially vulnerable people – then you are probably not as “right” as you thought. So you might be wiser to choose kind, to choose include.

Today many people won’t even consider the words of the Church because it has so often defined itself by exclusion. The Church that was created by its willingness to include the outsider; that follows a Lord whose life was characterised by spending life with those society excluded; has become less welcoming, less inclusive, than their schools, their workplaces, their community at large.

That might not be us – but we need to understand that that is how we are seen, by default, the assumption about us that we need to work to overcome. The Church has created a generation of outsiders. We need the courage to take Peter’s step; and the courage to face the criticism that follows.